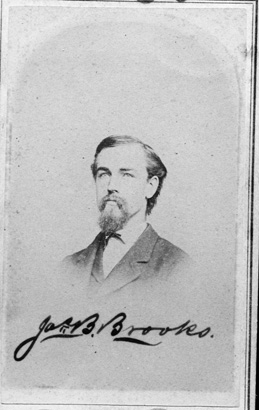 I came upon the Vermont Civil War site, and I was very pleased to see my great grandfather, Captain James Byron Brooks accurately reported. I feel compelled to burden you with detail of this fine gentleman's life, before, during and after the War. He was ever called Byron by those who knew him. He was born on June 27, 1837, in, or near Westminster, VT into a farming family. His mother died in the 1840s and his father took off for the California gold fields in 1850. The father wrote home only once, and his ultimate fate is unknown. Byron and his four siblings were placed with an uncle who worked Byron hard - more than was usual in that era. I have a 'carte de visite' of Lieutenant Brooks, and he appears to have been slightly built, and to have had delicate features. Perhaps his uncle's abuse toughened him for rigorous war time service.

Byron was inclined to reading and intellectual pursuits. This desire to "raise himself" came about when he was "converted" during a Methodist camp meeting. He also acquired abolitionist sympathies at such a meeting. His aunt evidently helped him with money to continue schooling (It was not free). He managed to get enough schooling to do some teaching, and sometime in the late 1850s he entered Newbury Seminary, an institution later moved to Montpelier. He was at Newbury when the Civil War broke out in the spring of 1861. He enlisted at once in the "Bradford Guards." I have a moving letter that he wrote to a sister in which he sets out his reasons for joining up. My impression is that he was elected by his fellow soldiers to be a second lieutenant. You have his record of advancement, but you do not have his history as a "detailed" signal officer.

I have a letter from the Army Chief Signal Officer (1867), acknowledging his service in signals. In the era before there were medals for bravery, there were brevet promotions, and "Mention in Dispatches," and "Citation in General Orders" (to this day, awards for merit and bravery are published in "General Orders.") He was cited for conspicuous bravery and steadfastness during the entire course of the Battle of Cedar Mountain. My own father's take on this was that he stood on a log pylon structure erected just behind the lines in contact with the enemy. His mission was to relay by both flag and telegraph, command instruction, and intelligence across the battle front and to the rear. No modern film, or painting I have seen accurately depicts signalling arrangements of that era. We know that is how information was conveyed then, but depicting it as it really happened does not fit with our romanticizing notions of mounted staff officers galloping about with messages. By his own request, Lieutenant Brooks returned to the 4th Vermont, as Captain of Company H. Your records show that he was wounded during the course of the Wilderness blood bath, at Cold Harbor, the battle that General Grant regretted in his autobiography. There is a story attendant to his evacuation from the battlefield.

(Note: Bruce Caton's account of that battle leads me to believe that Byron and all others recovered and evacuated were extraordinarily fortunate, as many could not be recovered from the field. Many were consumed in forest fire. I am well acquainted with this terrain South of Fredericksburg. Fort A.P. Hill occupies a part of it, and today the Third Regiment, Old Guard, trains there as did the Army's Engineer Officer school until its relocation from Fort Belvoir to Fort Leonard Wood. It is terrible terrain for offensive operations, and ideal for defensive operations. One can understand how two armies would/could march parallel, one to the other, and neither would suspect the presence of the other until trails crossed, or the columns would break simultaneously into clearings. Cold Harbor was particularly gruesome, as Grant would not agree to an armistace to collect the wounded. Those who fell wounded in front of Confederate lines were doomed. The only succor they received came from Confederate soldiers who could not endure to witness their enemy's suffering. It seems that the trip to Washington's hospitals was as dangerous as the battle front.)

On the way to Washington, the ambulance train (not rail road) was attacked by Colonel Mosby's guerrillas who carried off the ambulances. Byron and some few who could move, in the dark of night, rolled out of the wagons and hid themselves in a ditch. Federal troops picked them up and conveyed them to Washington. In August 1864, he was placed on the invalid list and furloughed to Westminster. I have in my possession his three commissions, receipts from the Washington Military Hospital, and the Report of Medical Examination. (Captain Brooks died in 1914 of a septic fever brought on by the Wilderness wounds, never fully healed.)

Byron finished at Newbury and then entered Dartmouth College, from which he graduated in 1869, (Phi Beta Kappa, and member of Psi Upsilon Fraternity). By 1871 he had an MA from Albany, NY Law School, and was a member of the New York Bar. He married Caroline Jewell of Corinth and East Orange, VT. Mrs Brooks also had intellectual ambitions, and was President/Principal of a female seminary in that neighborhood. Captain Brooks and his wife made their home in Syracuse, NY, where he became prominent in his profession. In addition to his own practice and partnership, Byron took on the formation of the Syracuse University Law School. He took the deanship in 1894 and occupied that position until his death in 1914.

Captain Byron Brooks was a member of the Grand Army of the Republic, maintaining his membership in Vermont, and not New York. He refused all pensions and emoluments deriving from his military service. Instead, for Vermont's and other veterans, he performed pro bono legal services, and gave other resources as he could to those who were in need. It was his custom to insist that his assistance not be acknowledged, lest recipients be embarrassed by its necessity. He spent each summer at his wife's small farm near East Orange. The Captain would set up his officers tent and use it as a study. He slept indoors, but spent all of each day under canvas, reading and writing.

My great grandfather is an example of the very best that that our country produces. He gave far more than he ever received in material compensation. His daughter, he had no son, graduated from Syracuse University, PhD, Phi Beta Kappa, Classical Languages. Her son, My father, James Brooks Lyon, Cornell University, Phi Beta Kappa, Major United States Army (Retired, disabled), spent his childhood summers on the farm near East Orange. (The small house still exists, all Victorian embellishment removed.) I am the product of the cross pollination brought on by the Second World War. I was born at Fort Sam Houston, Texas. I call my mother's native city, Savannah, GA my home town. I think Captain Brooks would be surprised, but pleased that our nation is so cross populated.

I am a retired Army officer of twenty-six years service. I work as an engineer overseeing new school construction in the metropolitan Atlanta area. My great grandfather Brooks has been an inspiration in my life, leading me to want to attain some small portion of the character and courage he had in abundance. I can say with certainty, that in instances of professional desperation, when I did not know that I would live into the next hour, his hand steadied mine and inspired me to do more than ever I thought I could.

A native of Rockingham who attained prominence in Legal and educational circles died Wednesday evening of last week in Syracuse, N.Y., in the person of Dr. James Byron Brooks, dean of the College of Law, Syracuse university. He was born in Rockingham, June 27, 1839, a son of Nathaniel and Emily (Cutler) Brooks, educated at Newbury seminary: Dartmouth college, A. B. 1869, A. M. 1886; Albany Law School, LLB 1871; Syracuse University, D. C. L. 1895. He married, September 7, 1873, Caroline Lucretia Jewell of East Orange, Vt., who survives.

He entered the Union army as a private in the 1st Vermont infantry, re-enlisted in Company H, and became first lieutenant in Company I, 4th Vermont, and captain of Company H, but was discharged before being mustered as captain. He was on detached service as signal officer 1861-3; wounded in the battle of the Wilderness May 6, 1864; discharged on account of wounds August 5, 1864. He had practiced law in Syracuse since 1872. A number of his partners stood high in the profession. He was elected in 1895 dean of the College of Law, Syracuse university, having that year organized the college, holding that office at the time of his death. He had been a trustee of Syracuse university since 1885; alderman in Syracuse 1884-5; school commissioner 1886-88, and had held many other offices of trust in his adopted city. For many years he spent the months of July and August in East Orange.