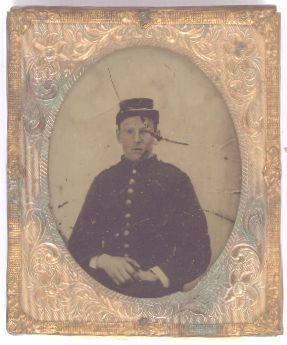 Anson Buxton was born in Worcester, Massachusetts on March 18, 1847, the son of Simeon Bentley and Caroline Boyden (Bullard) Buxton. He had three older brothers: William, John, and Biography. His twin Albert died in infancy. The family moved to Rutland, Vermont by 1855, and then to Montpelier, where Simeon had a large foundry on the Winooski River. The boys had many duties at the foundry, and were learning to be machinists. By 1862, BiographyJohn had enlisted twice, and Harris had just enlisted, so Anson joined also. He enlisted at Dummerston in Co F, 2nd Vermont Infantry on August 21, 1862 as a private. Anson claimed he was eighteen, but he was only 5 feet 3 ½ inches tall. The officers, noting his extreme youth, called him "Creeper". He was made an orderly to Col. Henry Whiting, who was the brigade commander. Whiting was from Michigan, and a professional soldier. Being on the outside of Vermont military politics, Whiting's request for a promotion was denied. Anson and the family always referred to him as "The General".
After the disaster at Fredericksburg and Burnside's Mud March, Whiting resigned, and returned to his home and family in Michigan. He had kept a fatherly eye on Anson, and hearing that Anson's parents had separated, wanted to adopt him, without success. On February 14, 1863, the surgeon wrote a disability discharge, stating that Anson was "unable to perform the duties of a soldier", due to "tender age and small size. His real age is but fifteen years."
By 1864 Anson had grown to 5 feet 8 inches tall. He enlisted at Bennington in Co. E, 17th Vermont Infantry as a private on March 25. He was seventeen, with blue eyes and sandy hair. The 17th was mustered on April 12, and assigned to Burnside's Ninth Corps. Anson fought at the Wilderness and Spotsylvania. He was wounded in the right side by a piece of shell during the Assault on the Salient on May 12, 1864. He was moved from Belle Plain to Finley Hospital in Washington, and a hospital in Montpelier. He returned to his regiment in April 1865 and was discharged near Alexandria, Virginia on July 14.
After the war Anson returned to Vermont, where he worked in the shops of the Vermont Central Railroad at Saint Albans, and at Blood's Locomotive Works. He married Hattie AdelIa Clough, of Strafford, Vermont on April 25, 1870. They had six children. In 1883 Anson bought a house and blacksmith shop in Bristol, New Hampshire. He was a happy man who enjoyed his work, his friends, and his family. He also had a small farm on nearby Newfound Lake, where he grew hay, cut firewood, and went fishing with his sons.
By 1929 Anson was among the last of the 2nd and 17th regiments, and the last Civil War veteran in Bristol. In a letter, he wrote of both serious and amusing sides of this situation - "A Vet in the Pulpit." At last, he too passed away, dying in Bristol on April 25, 1930 - his 60th wedding anniversary. He is buried in Homeland Cemetery.

Bristol, N. H.,
March 16, 1929
My Dear Billie Boy:
I am the only the only Pensioner in this county now, and today I received a letter from the Adjutant General of Vermont that I am the only Soldier alive of the old 2nd Vol Inftry Regt and only [he,] Chas. Watson and myself in the 17th Vt and he is 90 years old and lives in Montpelier, Vt. Edward Baker the Adjutant is 87 and he has been Adj. Gen. for the last 26 years. I saw him wounded at the Battle of the Wilderness. He was a Sergeant of Company G the 17th, He wrote me a very nice letter [regarding my letter] which was referred to him from the Secretary of State Vt who had looked over all Reports & Roll call of the 2ud Vt Inf which was made up of Montpelier young men. He said he had resided in Montpelier since 1869 and being Department Commander and knew all of the old Boys and said,
"I do not know of a single man left alive in the 2nd Vt only you. And only you, Chas Watson and myself in the 17th, being connected in this office for the past 26 years which enabled me to keep good track of all the Boys but you Comrade Buxton. Glad to hear from you. We are all getting near the End of Life's Journey.
Yours fraternally, Edward Baker, Adj Gen Vt."
I would send you the letter from him but I want to keep it for old time sake. With love to all. This letter belongs to all of you.

Dear Annette and all the Buxtons:
This will do for the Sunday one. As you said about your Wed. letter, "a little late." The Sunday was spent at the Baptist Church as a memorial day, and I was up there. The Same Old Anson and I don't want you to laugh or cry, but Marcelyn can for she likes my Reports as an honest "Author and Writer."
The Start was to be from G.A.R. Hall at 10:30, Bristol Tin Pan Band to play the Devils Dream on Cemetery Street until they came to the foot of the Hill and then Old Hundred till they got into the yard where they could get a drink of water out of the Squirt Fountain.
The Baptist Church was full to the doors from all of the other places and Bristol's 3 Parsons Presided, and a Vet in the Pulpit. The Text was Elijah and his Memorial Meaning, and the Rev. Mr. Bufthen or Bluffem, whatever his name was, started out till all the audience was Sound asleep. I was nodding up there behind the Pulpit like the Rest of the Hayseeds, with a stomach ache and Hungry! I felt like a Monkey on a Pole with a little Red Coat on.
The speaker never said a word about any Veterans of the Civil War, or that the great General John A. Logan introduced this to be a veterans day in the U. S. Congress. A man came after me in an auto and he took hold of my arm to help me and I said, "Take your arm away. I am no D--- Cripple, and don't need to be helped. I can yet go alone." When I got home, to his surprise I ran like a Dog could up in to my home.
I had an invite by the Adj Gen of Montpelier to be one of the Speakers there the 30th, Decoration Day. I got my money Ready to go, but Ma Della is in no way to leave without Bernice to stay with her. I am going to stay with her as long as we live no matter what Happens.
When I go up street now I can see a fore finger come from all over the Square, saying, "He is the only Civil War Vet in Town." It makes me feel as I was a Saint. But I always thank the good Lord. He has Spared me this long time and Ma too. And now I want to do what is right to pay for these nice Blessings from Him. Tis True.
My love to all,
Dad Anson - The Saint