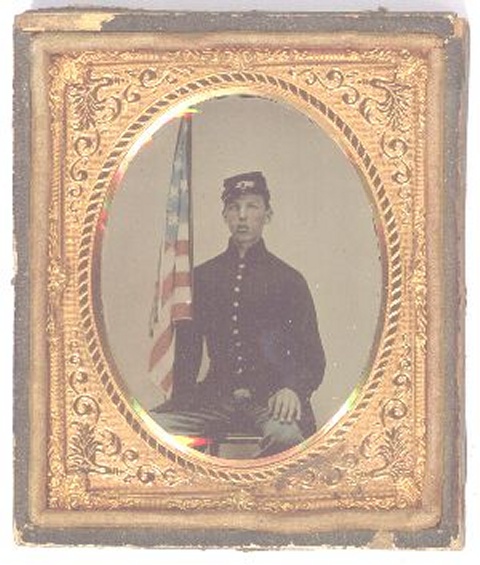 Harris Boyden Buxton was born in Woodstock, Connecticut on January 14, 1845. He was the third son of Simeon Bentley and Caroline Boyden (Bullard) Buxton. He had three brothers, William, BiographyJohn and Anson, and a sister, Caroline. The family moved to Worcester, Massachusetts in about 1846, and to Rutland, Vermont by 1855. They then located in Montpelier, where Harris' father had a large foundry on the Winooski River. Like his brothers, Harris worked at foundry chores, learning to be a machinist.

No doubt Harris had grown up hearing stories of his three great-grandfathers who fought in the Revolution, and he was patriotic. By the summer of 1862, his brother John had enlisted twice, and Harris volunteered also. He was only seventeen, but he enlisted at Montpelier in Company H, 11th Vermont Infantry Regiment as a private on July 23, 1862. He was the second in Vermont to join the regiment. The regiment mustered at Camp Bradley in Brattleboro, where, in his letter of September 2, Harris described standing guard through the night in a violent thunderstorm. The regiment then went south by train to construct and man forts for the defense of Washington.

In his letter of September 24, 1862, Harris told of the precautions taken as his unit went through Baltimore, and on to Fort Lincoln, on the northeastern perimeter of Washington. The days were spent digging and chopping, as the men worked hard to complete the defenses. Harris remained patriotic, writing, "Harris B. Buxton - true to his country and flag.

That winter the regiment officially became a heavy artillery unit. Company H went into winter quarters at Fort Slocum. The buildings were constructed of logs stuck in the earth, and chinked with moss. Many of the men became sick. Harris contracted typhoid pneumonia and was taken to the regimental hospital at Fort Massachusetts (later Fort Stevens) . He died there on February 20, 1863. He was buried at the nearby Soldiers Asylum Cemetery, now Soldiers Home National Cemetery, the first national cemetery of the Civil War.

Little evidence of Harris' brief life remains. The National Archives preserves his two wartime letters. There is his tombstone, white and weathered, standing in the long rows, casting even shadows across the soft grass. And there is his photograph, in. uniform, holding the flag, the enduring flag, close beside him.

Original in pension tile at National Archives. Some punctuation (periods) added for clarity.

Original in pension file at National Archives. Some punctuation (periods) added for clarity.


The above is a true record of all that have died in our hospital, as before stated, making in all, ninety-three cases in one year and a half. Perhaps some may think this a pretty large amount of sickness and death in so short a time; but it seems that thus it is. I have been connected with the hospital department all the time, with the exception of a few weeks. We have things very convenient at present, so that the sick are, or can be, well taken care of; and I think that they do have all done for them that can be, for the place.
Yours &c., W. J. Cheney.