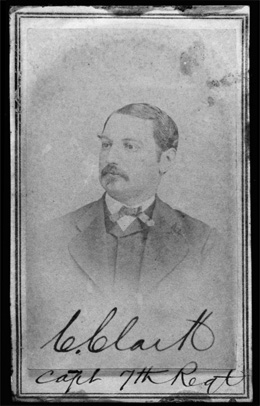 Charles Clark, for many years cashier of the Baxter National bank and for a long time treasurer of the city of Rutland, took his own life sometime Monday night, his body being found yesterday morning about 6 o'clock lying face down in East creek under the railroad bridge in the rear of the gas works. The body was lying in only about two feet of water. A telephone message received at police headquarters was answered by Officer Jesse Young who with John P. Clifford and Health Officer C.F. Ball pulled Mr. Clark out of the stream. He was recognized by P.H. Seaver, a close friend. In his pockets were found about $140 in money and a razor.

Mr. Clark has been in poor health for over a year and because of his condition was forced to resign from his position in the bank July 1, 1910, after over 30 years of service.

Monday night he seemed in good spirits and after sitting on the piazza at his home, No. 63 Grove street, stated he would sleep on the couch for a while. This was the last seen of him alive by Mrs. Clark, who was dressing yesterday morning when informed of his death. Many friends of Capt. Clark think he started out yesterday morning for his usual walk and when crossing the railroad bridge became suddenly weak and fell into the water below. There were no bruises on his body.

Mr. Clark was born in Pawlet 73 years ago and when 23 years of age enlisted in the Seventh Vermont regiment, being mustered out with the rank of captain. He was a son of Mr. And Mrs. Horace Clark. Horace Clark with his brother, Merritt Clark, built the old Rutland and Washington railroad, the line now known as the Rutland and Washington branch of the Delaware and Hudson railroad. At the time the road ran from Castleton to Eagle Bridge, N.Y., connecting Poultney, Granville, Salem with Rutland and Troy, N.Y.

Capt. Clark enlisted in Company I, Seventh Vermont regiment at Poultney and while in the field he was commissioned lieutenant February 1, 1862. On August 28, 1862, he was promoted to the office of captain which office he held at the time of his resignation December 7, 1863. Capt. Clark participated in all the engagements with his regiment during his term of enlistment.

Capt. Clark was the first treasurer of the city under the charter and he served one year, being elected on a democratic ticket in 1893.

Capt. Clark was a prominent member of the Masonic bodies in this city. He was a member of Rutland lodge, No. 79, F. And A.M., Davenport chapter, R.A.M., and Davenport council, R.S.M.; Killington commandery, K.T.; Vermont consistory, S.P.R.S., 32d degree and also a member of Cairo temple of Shriners.

He was a charter member of Vermont lodge, No. 1, Knights of Pythias, which was formed in this city in 1870 and is the last of the charter members to die.

Capt. Clark was a member of Roberts post, No. 14, G.A.R., and for over 25 years he has served as a trustee of the post relief fund.

For over 30 years he served as teller and cashier of the Baxter bank. He held the latter position from 1904 until the time of his retiring in 1910.

Born in Pawlet, Capt. Clark spent his boyhood days in that town and Poultney, being educated in the public schools. He is survived by his wife, who was Mrs. Kittie Lincoln Wardwell, and by one brother, Jonas D. Clark of Poultney. He is also survived by two nephews and two nieces.

The funeral will be held at the Masonic temple Friday afternoon at 2 o'clock, and the services will be in charge of the Killington commandery, Knights Templar. Burial will be in Evergreen cemetery. The prayers at the house will be private.