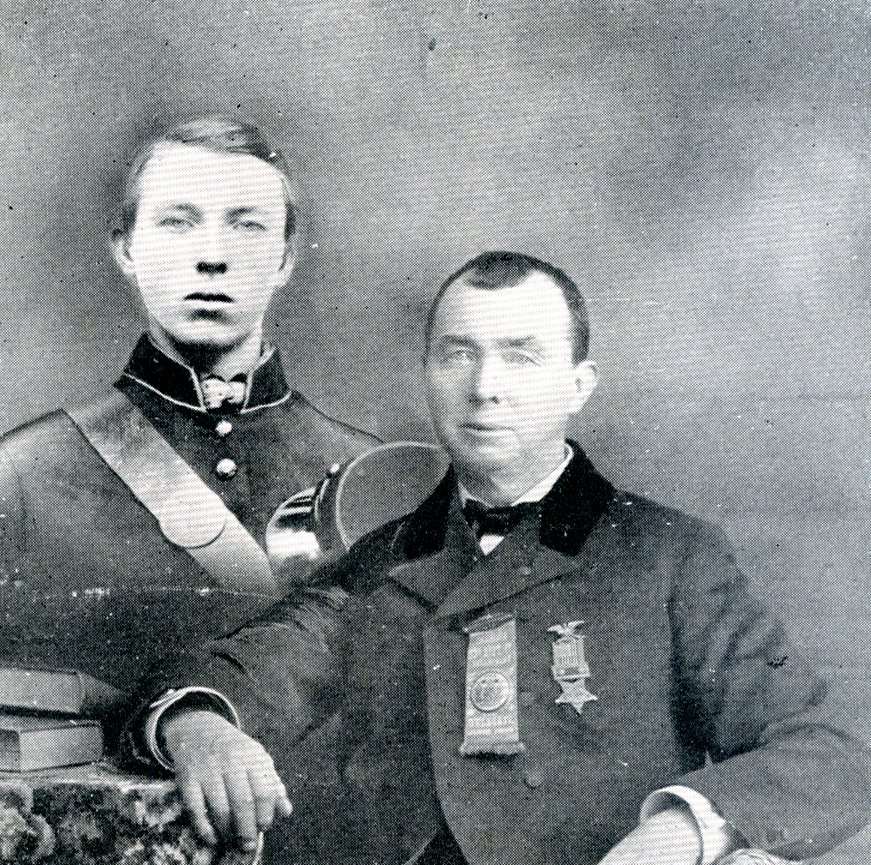 When the Civil War broke out I was very enthusiastic about going to the front, but as I was not of legal age, my father hesitated about giving his consent, however, I enlisted in the Ninth Regiment and drilled under Captain Beebe, but was taken out by my father, just as we were ready to start for the front. My second attempt to enlist was in the First Vermont Cavalry, which also proved a failure, but my parents finding I was so determined to fight for my country that they gave their consent and I, at the age of sixteen, enlisted in the 13th Vermont at Winooski Falls, Vt., drilling in what was known as Weaver's lot, and then went to Brattleboro and was mustered into the United States service and proceeded to Washington to the front - my desire to serve my country at last being realized. We encamped at Wolf Run Shoals, Va., where we did considerable skirmishing and, in the meantime, had an encounter with Mosby's guerillas. From there we went to Occoquan and then proceeded to Gettysburg and engaged in that great battle which you are all so familiar with, I will not describe but will add that I was wounded in the head on the third day by the bursting of a shell. It has been my great pleasure to visit several times of late years, these famous battle grounds where I have met old friends and spent many hours talking over the past and enjoying the present.

My picture in this book, the smaller of which represents me as a boy of sixteen, as I left my home at Burlington, Vermont, Sept. 6, 1862, and enlisted in the United States service as a private under Captain William D. Munson, Co. D, 13th Vermont Regiment. The regiment was mustered into service at Brattleboro, Oct. 10, 1862, after which we were ordered to Washington, D. C. where we camped on East Capitol Hill, and formed part of the Second Vermont Brigade. With my regiment I participated in the following battles: Fairfax Court House, Va., Dec. 28, 1862, Gettysburg, Pa., July 3, 1863. On the evening of July 3rd I received a wound in the head and was taken to the field hospital where I had my wound dressed. Twice I was surrounded by Mosby's cavalry, but escaped each time. I was honorably discharged July 21. 1863.

The latter and larger picture represents me as I am to-day, a plumber, at mv home in Vergennes, Vt., where I have lived ever since my discharge, enjoying good health with the exception of the wound in my head, which causes me a great deal of trouble at times. One of my greatest pleasures is attending the reunions of my regiment, where I meet so many of my comrades, and renew old acquaintances.

An important reunion of my regiment was held in October, 1899, at Gettysburg, where we met and dedicated a monument. This was a particularly important meeting, and a sad one as we bade each other good-bye, as each one realized that perhaps it would be the last time we would all meet together again.

As a soldier boy was a good type, quiet and modest in manner, willing and faithful in the execution of all duties that came to him. He served the full term of the regiment and came home with the respect of his comrades and he has never lost it. He has been a regular attendant at our regimental reunions and at G. A. R. gatherings. He has been located many years at Vergennes, Vt., and I suppose is rich, for his business is that of plumber. At any rate he appears to be well fed and wears good clothes. Long live William.

Dec. 13--Final military tribute was accorded yesterday to Col. William Crosby. last survivor of Ethan Allen post, Grand Army of the Republic, who died at his home on Green street Tuesday after a long illness. The funeral mass was celebrated yesterday morning at 9 o'clock at St. Peter's church, with Rev. L. A. Vezina of Rutland, Vt., former pastor, officiating.

The bearers were Dr. C. H. Cole, Howard W. Adams, Clinton McCormack, Henry Adams, Raymond Slack and John McEvilea, members of the Vergennes post, American Legion. Floral tributes were received from friends and organizations. Col. Crosby was born in Westford (sic), Ireland, May 27, 1848, son of Thomas and Anastasia Powers Crosby. He came to Montreal with his parents when he was two years old. The family later moved to Burlington, Vt. where Crosby entered business as a plumber and tinsmith. Although not legal age when the Civil War broke out he enlisted with the 9th regiment, but when the company left for Washington his father's objections prevented him from accompanying the regiment. He attempted to join the First Vermont cavalry without success. With his parent's consent he enlisted as a private under Capt. Munson in the 13th Vermont regiment, September 6, 1862.

Crosby took active part with the Second Vermont brigade at Wolf Run Shoals, Va., and was wounded in the battle of Gettysburg. After his discharge from the service in July, 1863, he returned to Burlington, Vt. where he married Miss Catherine O' Neill of Keeseville, NY. They moved to Vergennes, Vt. Five of their six children survive: Mrs. Frances Ramsay, Miss Ada Crosby and Mrs. Catherine Garno of Vergennes, Vt., Milo Crosby of Oakdale, Cal., and Charles Crosby of Chicago.

Two years after Mrs. Crosby's death in 1881, Crosby married Miss Catherine Gordon of Vergennes, Vt. They had one daughter, Mrs. Margaret Horsford of Charlotte, Vt. The second Mrs. Crosby died in 1918. Burial was in Prospect cemetey, where full military honors were accorded. Rev. G. E. L'Eeuyer officiated at the grave, after which the legion committal service was conducted by Wesley Smith. Taps were sounded and a volley fired in salute. The flag of Ethan Ellen post, which Col. Crosby carried for several years as standard bearer, was draped upon the casket.