Last Sunday morning Timothy Deblois, as well as usual, went to the pasture and caught his horse to go to Lowell to church. Not coming as soon as expected, Mrs. Deblois went to the barn and found Mr. Deblois dead, from heart failure, before he had harnessed. The funeral was held from St. Ignatius church at Lowell, Wednesday, and was largely attended. Mr. Deblois came to this town 51 years ago and has lived ever since on the farm he first bought, and was about 81 years old.

He saw three years service in the rebellion and was corporal of Co. D, 11th Vt., which took part in the battles of Cedar Creek, Winchester, Spotsylvania, Cold Harbor, Fisher's Hill, etc. He held many of the offices in town, was a good neighbor and thrifty.

He married Adeline Laurett and they had seven children: Mrs. Levi Desautel and Mrs. Henry Roberts of Woodsville, who are dead; Mrs. Frank Sheltra, White River Jct.; Mrs. George Goddard, Julius and Alex Deblois of Lowell, and Nelson Deblois of Woodsville, N.H., who have the sympathy of their many friends in their bereavement. Mr. Deblois was an active member of St. Ignatius' church in Lowell, and often read a service in the absence of the priest and was a consistent christian man. 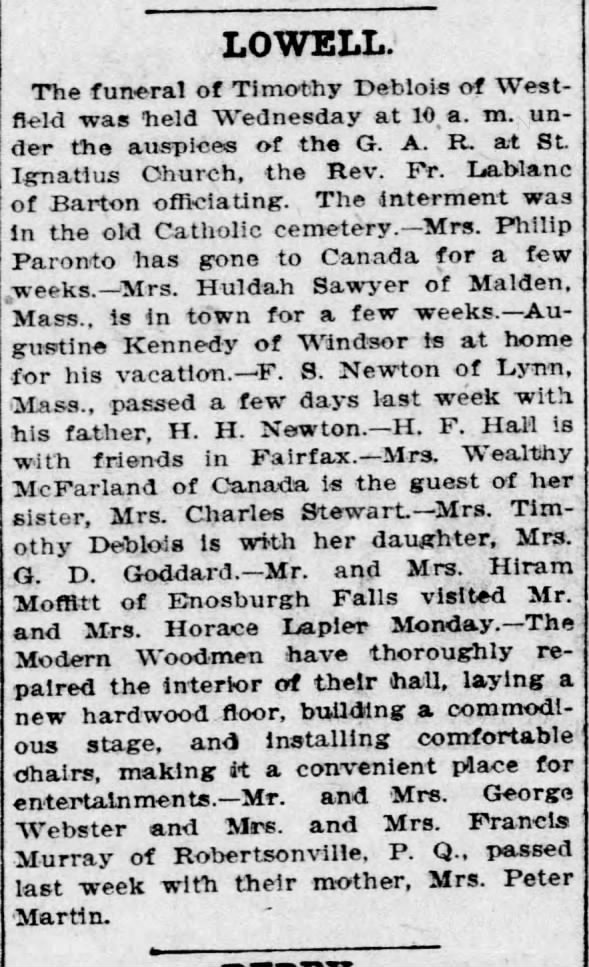