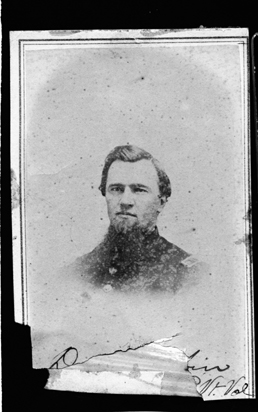 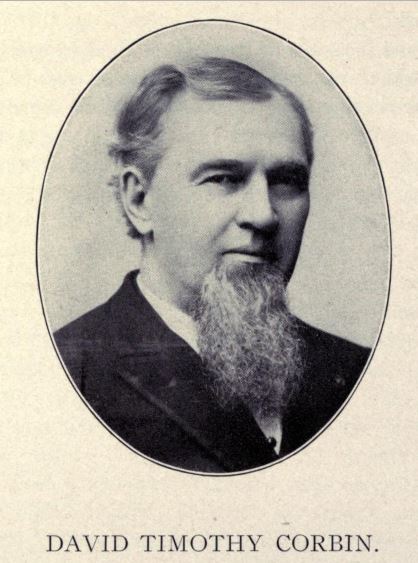 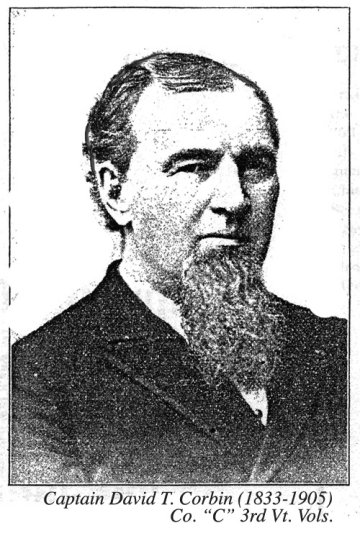 David Timothy Corbin was born in Brasher (St. Lawrence County) New York, 11 Aug., 1833, son of Peter & Eunice (Sawyer) Corbin. His parents removed to the town of Milton in Chittenden County Vermont when he was still an infant. This being the case, throughout his life Corbin considered himself a genuine "Green Mountain Boy" and was thoroughly loyal to his beloved state of Vermont. Although handicapped by poverty, he was determined to obtain a college education. There were no student loans back in the 1800s, but there were many philanthropic community leaders who helped young men like Corbin pursue their higher education. He did not have the funds to adequately prepare for college at an academy, but he managed to pass the entrance exam and entered Dartmouth College in 1853 at the age of twenty.

Because of his personal study habits and dedication to learning, he graduated with the class of 1857 and was a member of Zeta Psi Fraternity. Of his career in college, his classmate was Ex Governor Pingree, who was also the Lieutenant Colonel of his regiment when he served in the Civil War, wrote that Corbin was "not among the first in scholarship, but he was sound in character." In order to make ends meet, Corbin taught school in winter and in summer worked out on local farms. He saved every dollar he could to pay his own way at Dartmouth and he won the respect, sympathy and esteem of his classmates and his instructors.

He m. 2nd at Bath, 7 March, 1858, Sarah A. Davis of Bath. Soon after his graduation, he took up the study of law after reading and working with C. C. Dewey of Wells River. He worked from Oct., 1857 to Jan., 1860, and went into his own practice in February of 1860. Just as he was getting established in his profession, the firing on Fort Sumter summoned him to a more stern duty. He recruited a company at Wells River and enlisted as a private 23 May, 1861 in Co. "C" of the 3rd Vt.

Regiment, and was mustered in as their captain, 23 July, 1861. The company became part of the great Army of the Potomac. On 29 June, 1862 at the Battle of Savage's Station, Virginia, Captain Corbin was badly wounded. He was taken prisoner by the Rebels and confined in Libby Prison Hospital where he received poor medical attention, little of sustenance, and almost died. He had a strong constitution however, and was determined not to give up. He was exchanged in the fall of 1862, and on account of the severity of his wounds, he was given a furlough. He was honorably discharged from his regiment 11 Sept., 1862.

Not satisfied to remain on the sidelines while the war was still raging, he was appointed by the Secretary of War, Special Provost Marshal for the State of Vermont and served in that capacity from 5 Oct., 1862 to 18 March, 1863. He was afterwards appointed by President Lincoln as Captain in the Invalid Corps which was subsequently styled the "Veteran Reserve Corps." He served in this capacity from 3 June, 1863 to the close of the war, Dec., 1865. Most of this time he was on detached duty as Judge Advocate of General Courts-Marshall. He was promoted Brevet Major 13 March, 1865 for gallant conduct at Savage's Station.

About the close of the war, Corbin was ordered to duty at Charleston, South Carolina to work in the Freedman's Bureau. He arrived in that city in the fall of 1865.

He afterwards held Provost Courts for the city of Charleston and the Sea Islands.

He resigned his commission in the Army in March, 1867, and was immediately appointed U. S. Attorney for the state of South Carolina. He held this position for ten years, having been twice re-appointed by President Grant. It was during this period that the notorious Ku Klux Klan carried on operations in South Carolina, and Corbin was instrumental in breaking up their organization while securing the conviction and punishment of about 200 of its members and the indictment of about 1,000 more.

He was elected in 1868, a state senator from Charlestown and held this post for four years. Most of the time he served as president of the State Senate and Chairman of the Judiciary Committee. For six years he was City Attorney for the City of Charleston. In 1869 he was elected by the Legislature, one of the three Commissioners to codify the laws of the state of South Carolina and report also a code of practice.

His statutes were adopted by the Legislature. In 1869 Captain Corbin was elected Judge of the Circuit Court for the First Circuit of South Carolina. In 1876, he was elected United States Senator of South Carolina, but he lost the seat due to political squabbling in which his seat was contested by General Butler who obtained the seat by one vote.

In 1879, Major Corbin was nominated by President Hayes to be Chief Justice of the "Territory of Utah," but he was not confirmed. He was a Republican, and the State Senate of Utah was composed mainly of Democrats. In 1886 Corbin moved to Chicago, Illinois where he opened a law practice. He also taught "Criminal Jurisdiction and Procedure of the U. S. Courts" and "Constitutional Law" at Kent Law School of Chicago. He also taught in the Illinois College of Law and served as Professor of Federal Procedure and Practice and of International Law in the Law Department of Lake Forest University. In 1899, Major Corbin published a work on "The Law of Personal Injuries in the State of Illinois, and the Remedies and Defenses of Litigants."

From his obituary: "He will be remembered as a quiet, unassuming, courteous gentleman, a good citizen and a faithful friend; not always successful in business affairs as men count success, but as one of the rapidly diminishing number who, giving up their home and profession, offered their lives for the saving of the Nation.

The world is better for the lives of such men."

David T. Corbin, who took an active part in the "reconstruction" of South Carolina after the war of the rebellion, died Thursday night at the residence of his nephew, Earl Jackson, Maywood. Mr. Corbin was born in New York state in 1833, and, after being graduated from Dartmouth and begining to practice law, enlisted as a captain of Vermont volunteers. He was confined to Libby prison for a period. After the war he commanded the Charleston, S.C., district, taking a leading part in politics.Later,as district attorney, he prosecuted Ku Klux Klan members. Mr. Corbin returned to the north in 1878, and to Chicago in 1885. He was a law lecturer and writer.