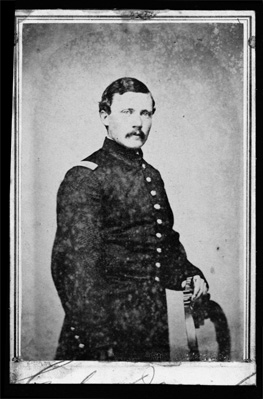 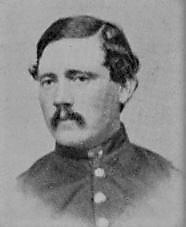 SAMUEL DARRAH was born in Poultney, Vermont, in 1840. Of his boyhood, early education, and personal experience with the world, we know nothing. Some years previous to his entering the service he was chief clerk in Stanford's dry goods house, Burlington, Vermont. This fact is sufficient to warrant the inference that he was a young man of excellent business tact, trusted integrity, and of high moral standing. As a soldier, his military record more than justifies this inference. He became a brave and trusty officer, and well merited the praise bestowed upon him by his commanders. He entered the service in July, 1862, and was commissioned First Lieutenant of Company D, August fifth following. Soon after, upon the resignation of Captain G. F. Appleton, he was promoted Captain of Company D, in which capacity he served God's time, and deserved the awards of highest valor for the great sacrifice he made. Probably no record which could be made would do him exact justice. Indeed it may be said for those who desire such a record, the reminiscences of friendly alliance and companionship, of trials and dangers borne together, of hopes mutually cherished, -- these will abundantly supply it.

Captain Darrah was complimented for bravery and coolness in action, in Colonel Jewett's official report of the battle of Locust Grove, November 27, 1863. In colonel Henry's official report of his death he speaks of him as an "active, intelligent, and exceedingly brave and efficient young officer." Also Lieutenant-colonel Chandler, in an official report to General Washburn of the engagement of the third of June, made of the sixth, speaks of him in terms of brotherly commendation. Quick to learn the duties of a soldier, faithful and energetic in their performance, he was one of our most popular company commanders. No doubt his kind and genial spirit, his generous nature, and his ready adaptation to the customs of more experience soldiers, won for him many warm friends, and made his death, in addition to his loss to the service, the more lamentable.

The following are some of the general engagements in which he participated: Locust Grove, the Wilderness, Spotsylvania, Tolopotomoy Creek, and Cold Harbor on the first and third of June. He was killed on the sixth of June, at Cold Harbor, in front of regimental headquarters, while in command of his company, by a rebel sharpshooter, the ball entering the back part of his head and coming out just above his left eye. it is said that this fatal ball first passed through the butt of a Springfield rifle stock, did its work of death, and then cut off a small sapling beyond. That at least was the opinion of Surgeon Childe, who was present at his death, and sincerely mourned his loss. His remains were immediately conveyed to Vermont, and in his native town rests all that mother earth may claim of Captain Samuel Darrah.

Capt. Samuel Darrah of the 10th regiment, was killed on Monday last and his remains arrived in Washington on Friday. In August Capt. Darrah joined 10th regiment as Lieutenant of Co. D, and was promoted to a Captaincy in January 1863. He was a general favorite wherever he was known.