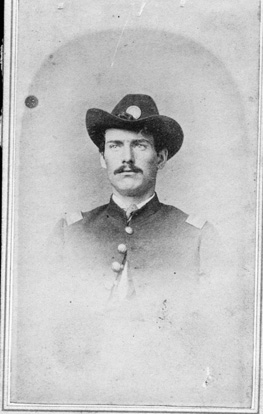 DEAR FRIENDS AT HOME: --- Again it becomes my duty to write you a few lines, in answer to a letter I received from home, not long since.

My health is very good, but my spirits rather gloomy right now. Bad whiskey is all I can get here, but that is very scarce, and finely I feel pretty well myself after all. I have just read a note from Adjt. Gen. Washburn of Vermont informing us that we could stay in Virginia until after the 4th of July, and about the 10th we could make an excursion trip, to visit the Green Mountains of Old Vermont Some of the boys don't fancy the idea of staying here a year to perform 9 months service and I can't exactly see the point myself; but I don't care so much for myself. I would rather stay here for nothing, than to have Rebellion and Slavery triumph over Constitution and Freedom. 30 days will soon pass away if we are well, and if the country needs our help to punish treason, after that date, I can see no reason why it does not belong to them. I go for crushing Rebellion and killing Slavery, and if it is necessary, at the cost of the whole amount of blood and treasure that exists in America. I cannot say that I want this war ended until both are totally exterminated.

Slavery is open rebellion against good nature and God's moral and divine laws, the most corrupt and God-forsaken institution that was ever suffered to exist upon earth, and when I hear of men leaving the army and going home, and talking in the manner in which I am informed that some returned soldiers have talked, since they returned home. I regard the unworthy of the title of soldier, or a birth-right upon American soil, they are neither men at home or soldiers abroad. I very often see men here finding fault with the Government, and if they don't get more to eat, than that which is provided for themselves or families at home, they dam the negroes for causing the war, and wish all abolitionists in hell, and go on with a senseless ramble that would disgrace any half-witted negro to tell, and disgust an intelligent one. I don't know as you need an abolition lecture, but I don't want you to believe all you hear about such things which as I understand are narrated for truth.

You have probably heard that our Brigadier General has been stolen from us, by the rebels; they played a fine game on General Stoughton, while he was asleep; I understand he was 5 miles away from the nearest regiment of his command, and 12 miles from the 12th and 13th Regts. We have received orders tonight, to be prepared to march at a moments notice. The rebels are crossing the Rappahannock in force between here and Rappahannock Station.

I do not imagine they will bother us tonight, if they do they will find us ready for them at any time; we have got to whip them by fighting them. The story that I understand is, is told in Cambridge and thereabouts that the South cannot be whipped by fighting, probably came directly from Jefferson Davis' headquarters, and he would be happy to hire Northern Copperheads to tell the story for him, if there were not plenty that are willing to repeat it after him for nothing. The idea that we cannot settle this thing, fighting, in my opinion is very absurd, and should never be advanced beyond the lines of the Southern Confederacy. It is a very good policy for traitors to talk in that way, but very foolish for loyal persons to repeat it after them.

Andrew J. Davis was born in May, 1840. His chance for an education was limited, --- his father being poor, and living remote from schools, which made it hard for him to get to schools in the winter, but he improved his opportunity. When the rebellion broke out, he wished to enlist, but his father, being infirm, kept him back.

In 1862, when the call for 9 months came (his father had gone to his long home), at town meeting for furnishing men, he arose and said, "I am ready to start and fight, but I want $75 to pay little debts, and not leave anyone to say he lost by my going to the war." John Warner,* then 80 years old, said, "I will give you the money." Whereupon Davis rushed through the crowd and put his name down first, which encouraged others to follow.

He was chosen 1st Lieutenant Sept. 8, 1862, and promoted to Captain, June 4, 1863, and mustered out, after serving 10 months and 18 days; --- married Amelia, daughter of Samuel Dickenson, Sept., 1863, remained at home five months, and then reenlisted, and was mustered in Feb. 23, 1864, in the 17th Regiment. He received a large bounty in the town of Berlin, in which place he last enlisted; was wounded at Cold Harbor Va., June 3,1864, which proved fatal, and he died at Army Square Hospital, June 19, 1864. His remains were brought home to Cambridge and interred. A year and a half later, his little daughter was laid by his side, leaving a young wife bereft of a husband and only child.

* The Hon. Judge Warner, then 80 years old, since deceased.

It was recorded that Captain Davis was buried in South Cambridge Cemetery, but several searches failed to find his headstone. Armed with his lot number after a visit to the town clerk, all that was found was an empty pedestal. But Deanna French isn't one to take no for an answer. She got a couple friends and went out and found it!

FIRST LIEUTENANT ANDREW J. DAVIS of Company E, 13th Vermont Regiment, was the first man to enlist from the town of Cambridge under the call of August 4th, 1862 of President Lincoln for 300,000 nine months' men to volunteer. He served as first lieutenant from date of company organization September 8th, 1862, until May 5th, 1863, when he was promoted to captain of Company E to fill the vacancy caused by promotion of Captain Boynton to Major of the Regiment. He was a good officer, wide-awake, energetic and ambitious to do his duty every time and look out for his men and their welfare. He made the march from Virginia to Gettysburg and commanded Company E upon the march and through the battle with credit to himself and the company in full. He returned to the State with the Regiment and to Brattleboro and was discharged with Company E on the 21st day of July, 1863, and returned home to Cambridge. He was anxious to render still more service to the government, so early in the winter following he went to Burlington and began recruiting Company B of the 17th Vermont when they' organized the company he was elected Captain of the company and in April following, he was ordered with his company to the front and were put into immediate action and was wounded June 3, 1864, and died June 19, from the wounds he received the 3rd of June, 1864. 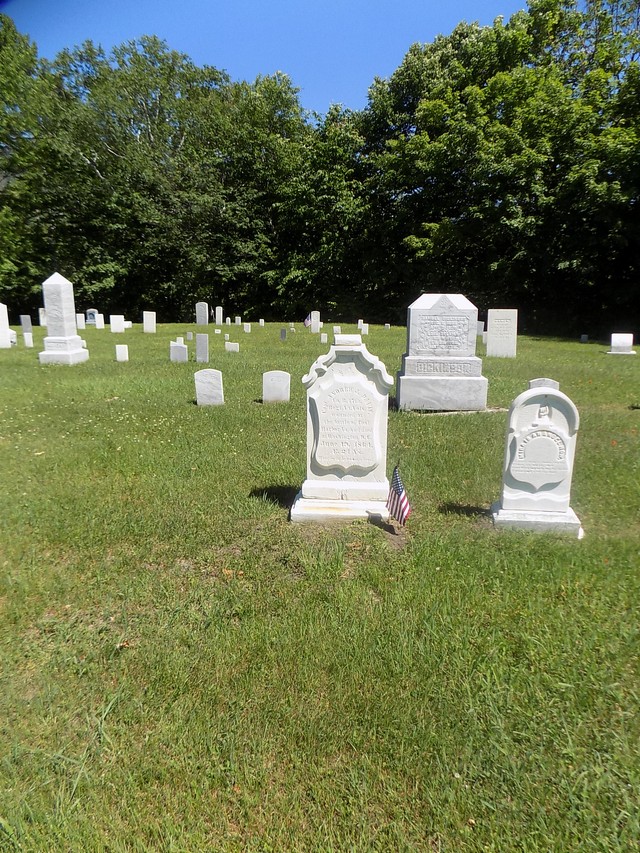 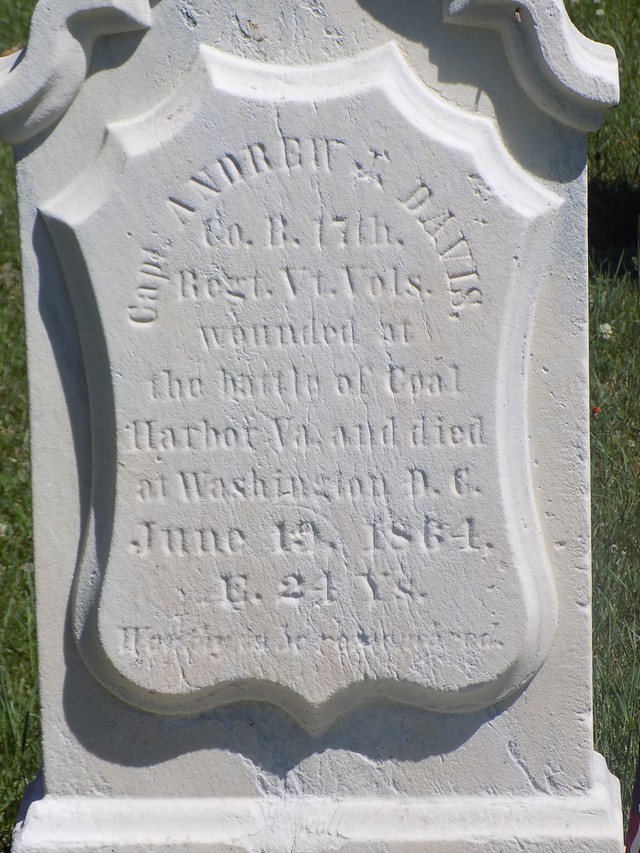 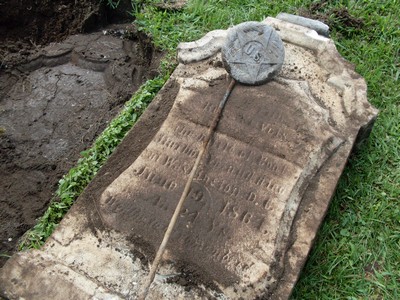 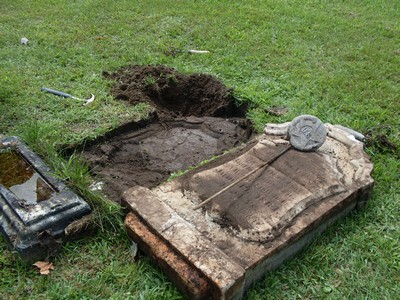 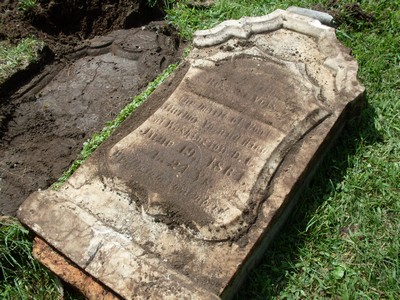 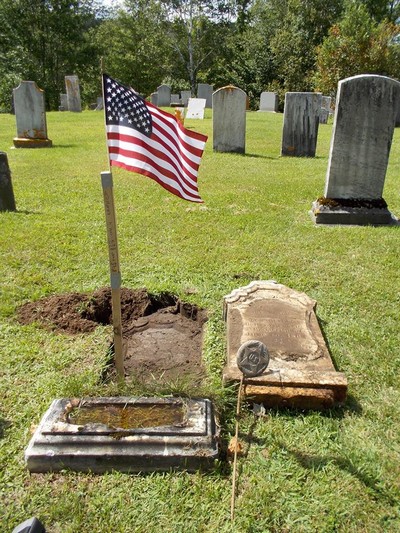 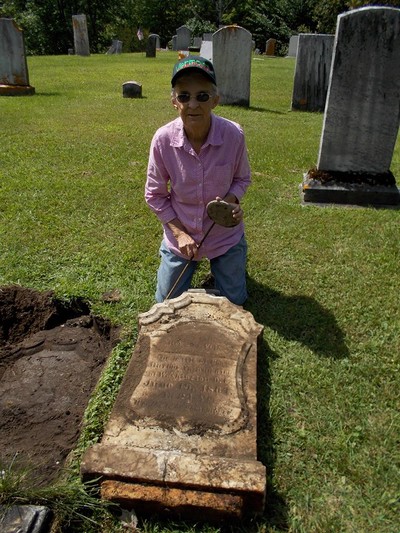 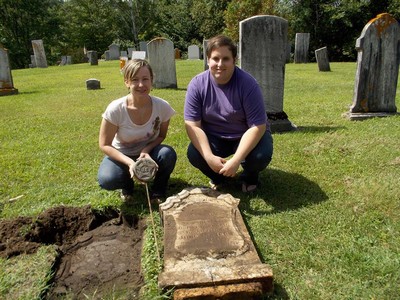