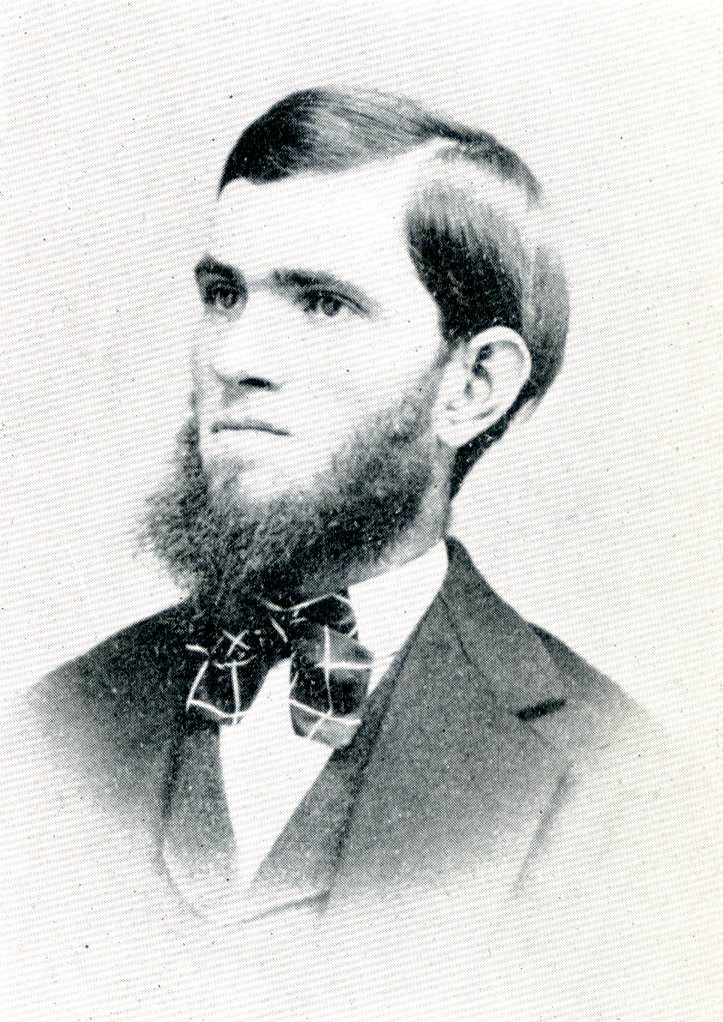 EDWARD A. FISK son of Anson Fisk, was born in Waitsfield, February 1, 1842. My father was of the old Puritan stock, his ancestors coming to this country and settling in Salem, Mass., about 1637, and he traces his lineage back more than 200 years further to one Lord Lymond Fisk of Suffolk County, England. My great-grandfather was one of the early settlers of Waitsfield.

I enlisted August 18, 1862, and helped to organize Company B. I was never sick enough to be in the hospital, or off duty for any length of time.

At Gettysburg I was slightly wounded by a piece of spent shell, which struck my right knee, just as the regiment started on its charge of July 2nd. Though bruised and lamed I did not leave the field and took part in all the movements of the regiment to the last.

I was utterly exhausted by these hardships and was sick at Brattleboro with what proved to be typhoid fever when I reached home. This nearly cost my life but careful nursing brought me through.

I am a farmer and resided in Waitsfield till 1895 when I removed to the neighboring town of Fayston where I lived till 1906 when I returned to Waitsfield. I was selectman six years in Waitsfield, also school director three years. Chairman of school board in Fayston seven years, also auditor. I represented Fayston in legislature in 1902.

You ask for stories and incidents and I send you the following which you can use if you see fit or not as you please and I shall not feel aggrieved. E. A. F.


Notes From A Soldier's Diary

Feb. 20, 1863. I went on picket. Was stationed at what we call "Sally Davis's Ford," about two miles down the Occoquan from our camp.

This is an important post and there are some twenty men to guard it, though there is not much danger of any one crossing the river to-day as the water is nearly bank high owing to heavy rains. It is a pleasant day, but cold--almost like a bright winter day in Vermont.

We have a cavalryman at this post to act as a messenger in case of need and about noon the new details came from down the river. The path led across a little brook or "run," as they call it here, just below our post. Usually there is not much water in it, though near the river it has a sunken channel with rather steep banks, but now the water had set back from the river so that it was quite deep in the center.

At first as the horse stepped into the water the path seemed all right, but the water was roily and as soon as he was beyond the bank horse and rider were in the water all over. After swimming a short distance the feet of the horse caught in some bushes and the man was thrown off but he struck out boldly and soon reached the shore, a distance of several rods, although encumbered with arms and accoutrements. The carbine, cartridge box, belt and revolver, saber, etc., weighed him down so that it made one think of the Roman knight who swam from the River with his armor on. The horse was rescued at length, by means of a long pole with a hook which we managed to catch into his bridle.

It was a bitter day for such a bath, but we had a good fire and got the man to it as soon as possible, where he wrung out his wet clothing and hung by the fire all he could spare, while he dried the remainder by turning first one side and then the other to the fire, but he was one of the sort that could not be kept still long at a time and soon without coat or boots he was riding his horse back and forth to prevent his taking cold .I often wondered what effect this exposure had upon this man but I never heard from him again. It was such hardship and exposures as this that cost us more lives than the bullets of the enemy. E. A. F.

Edward Anson Fisk passed away at his home in Royalton Oct. 12, after a long illness. He was born in Waitsfield Feb. 1, 1842, the eldest child in the family of Anson and Joanna (Barnard) Fisk. Nov. 28, 1876, he was united in marriage to Miss Lillian Ramsey of Waitsfield common, and they were parents of four children, Annie L., wife of Lewis Whitcomb of Waitsfield, Charles F. of Royalton, Anson H., of Waitsfield and Harold H., of North Ware, Mass.

The greater part of Mr. Fisk's life has been passed in Waitsfield. Several years ago, for a few years, they lived in Fayston, but after a time returned to Waitsfield common. About four years ago Mr. and Mrs. Fisk moved to Royalton. He was a Civil war veteran, having served in Co. B, 13th Vermont volunteers. He has held many town offices of trust. When living in Fayston he represented that town in the legislature of 1902. He was one of the charter members of Ainsworth post, G. A. R., and had held the office of commander. He was a member of the Congregational church and was made deacon June 29, 1866, and had always held the office while resided in this town. He was ever active in all church affairs. He was charitable, courteous and considerate of others, The determination with which he held himself to that which he felt to be his duty, his loyalty to his friends and his devotion to his family, his uprightness and scrupulous honesty gave him a large number of friends and the regard and esteem of all who knew him.

The body was brought to Waitsfield Thursday and funeral services were held in the Congregational church at 3 o'clock in the afternoon, Rev. F. M. Sellers officiating. The bearers were his three sons, Anson, Charles and Harold, and three of his former townsmen, G. M. Jones, W. L. Jones and E. H. Jones. Interment was made in the village cemetery.