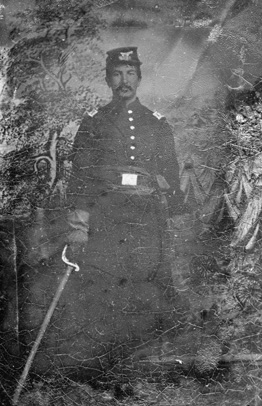 Captain Dix was the son of Justus H. Dix of Wilmington, long a prominent citizen, and a grandson of Ozias Dix, a Revolutionary soldier, from Weathersfield, Conn., who settled in Wilmington at the close of the war for Independence.

Henry F. Dix grew up on his father’s farm. At the age of 21 he went to Illinois, was employed in the dry goods store of his cousin, T. H. Castle, and pursued a partial collegiate course at Lombard University, Galesburg, Illinois. About 1860 he spent a year in Colorado, at the Pike’s Peak Gold Mines, crossing the plains with an ox team, like others of that period.

From Colorado he returned to Vermont and the war of the Rebellion having broken out, he raised in Wilmington, a company for the 16th Vermont Infantry, of which he was elected Captain. His Colonel was Wheelock G. Veazey, afterwards a Judge of the Supreme Court of Vermont, and Commander-in-chief of the G.A.R. His Lieutenant Colonel was Charles Cummings, who was editor of the Vermont Phoenix when he entered the service.

This regiment was attached to Stannard’s Vermont Brigade, which played a gallant and conspicuous part at Gettysburg.

After his Army service, Captain Dix studied law in Wilmington and graduated at the Albany, N. Y., law School in 1866. Shortly afterwards he located in Memphis, Tenn., and began the practice of his profession. That city was then just emerging from the wreck of the Civil war, and afforded a fertile field for legal ability. He became a member of the firm of Pierce, Richards and Dix, which speedily grew into more than local prominence and achieved enduring success.

Captain Dix practiced law in Memphis for about thirty-five years, actively and with high credit. He practically retired about six years ago and for two years before his death had been in failing health.

He was a man of marked ability and of superior professional attainments. He was of cheerful dispositions, with a keen sense of humor, a ready wit and good conversational powers. He had many friends, to whom, and to his family, he was thoroughly devoted. He is sincerely mourned by a wide circle of surviving associates.