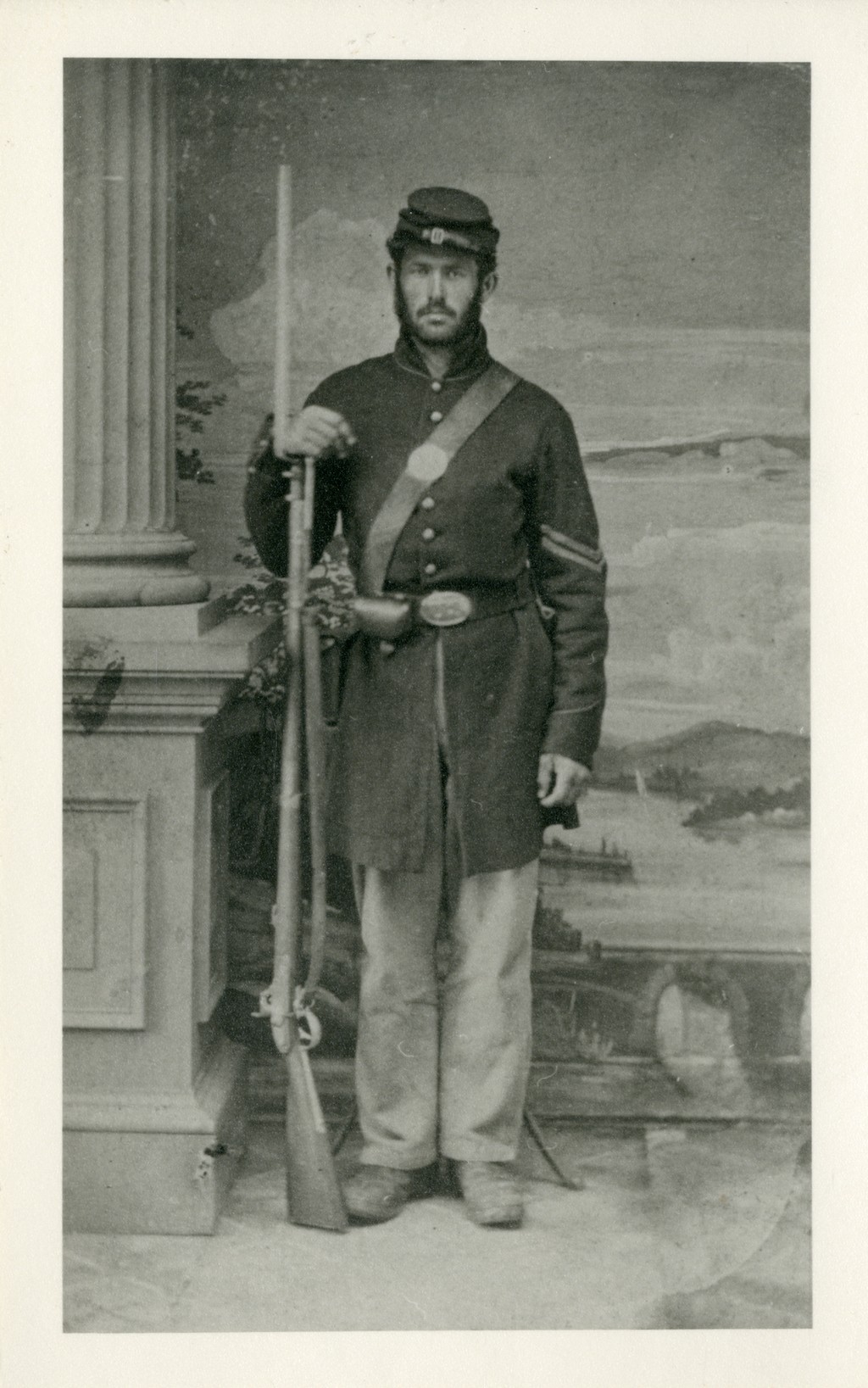 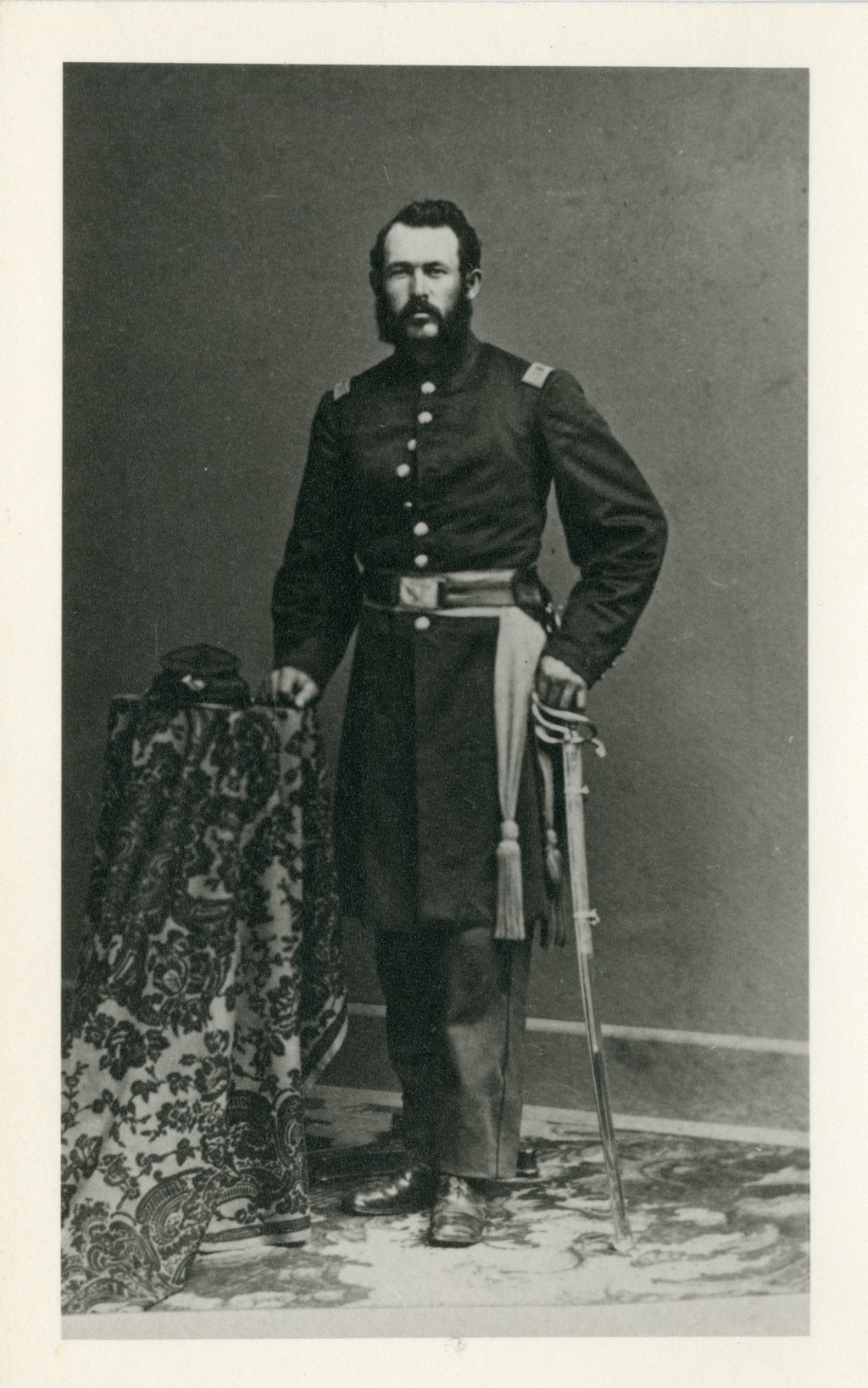 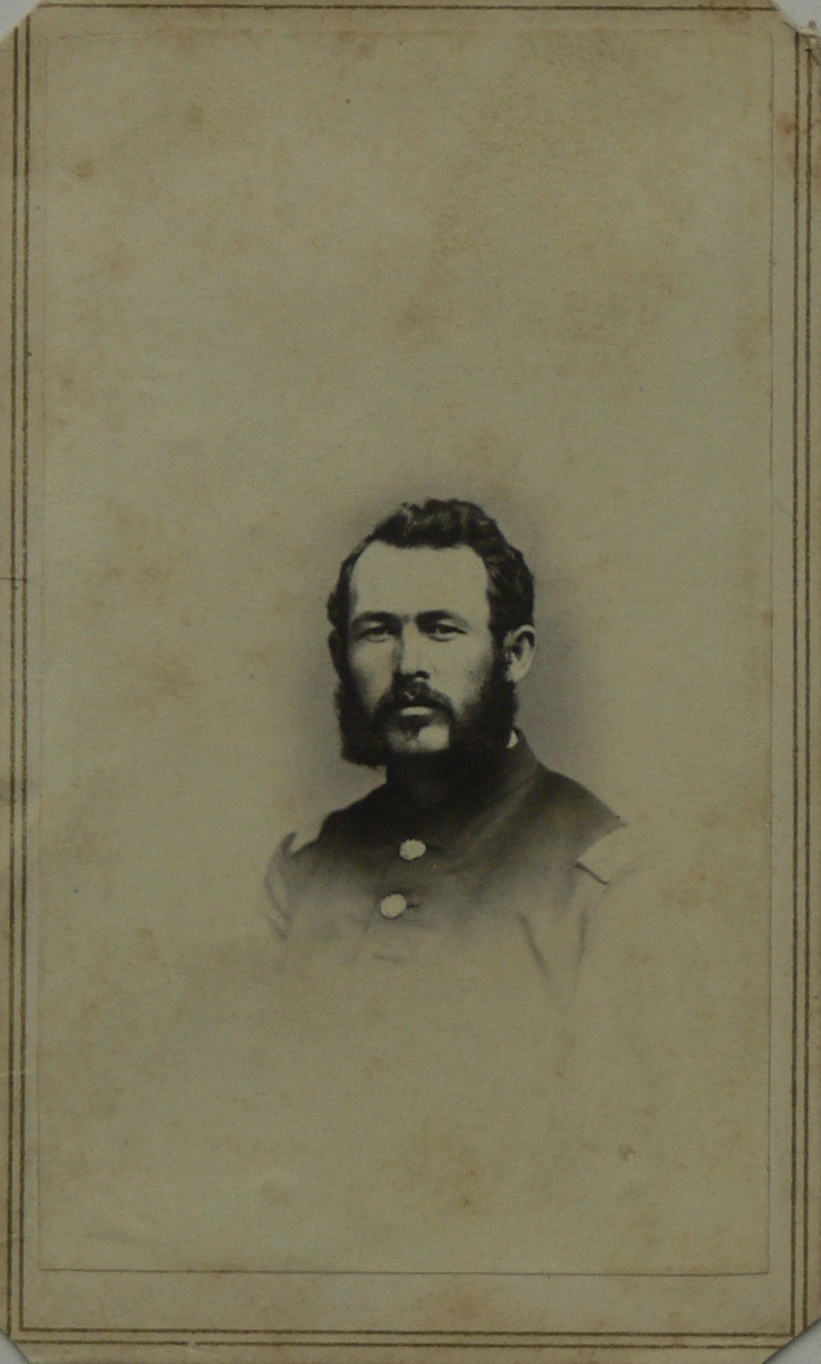 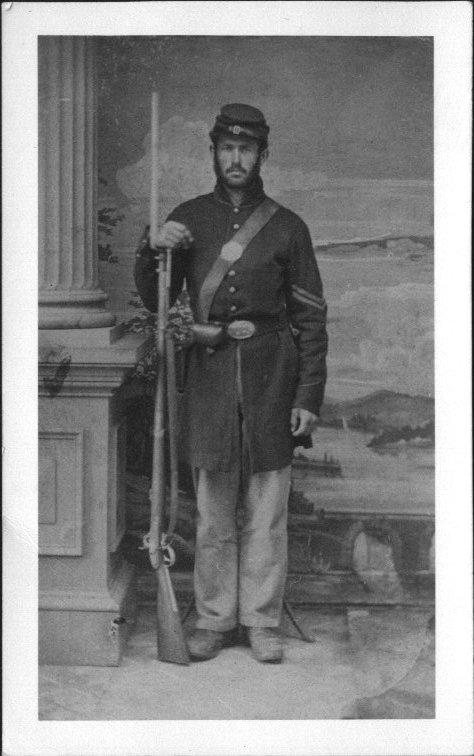 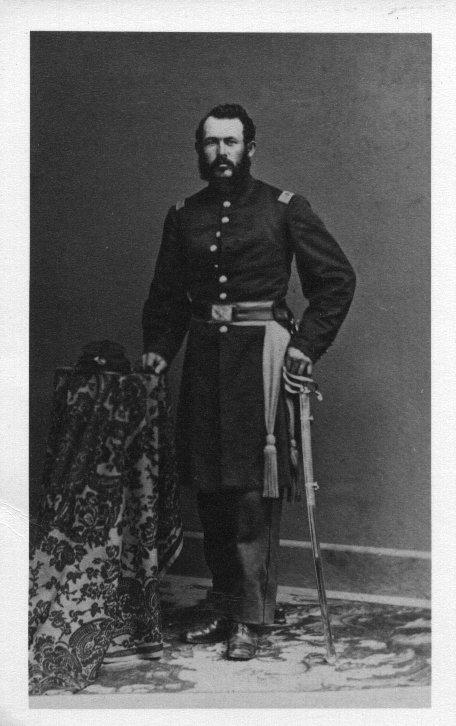 Albert Francis Dodge was born in Barre, Vermont, on 23 September 1838, the son of Oramel and Lucy Dodge. Oramel was a blacksmith. By 1850, the Dodge's were still living in Barre, and Albert, age 11, had a younger sister, Lucy, age 6.

At age 23, he enlisted, credited to Barre, on 28 July 1862, and mustered in 1 September as Corporal in Co. B, 10th Vermont Volunteer Infantry. He was promoted to Sergeant on 17 February 1863, and a year later, on 21 March 1864, was discharged from the regiment to accept a commission as Captain, Company F, 39th U.S. Colored Infantry.

Dodge's new regiment was mustered into service in Baltimore, Maryland at the end of March. It was initially attached to the 9th Corps, Army of the Potomac, and subsequently served with the 25th and Terry's Provisional, and again the 10th Corps, through the end of the war. From August to December 1865, it served in the Department of North Carolina.

The 39th served in the campaign from the Rapidan to the James River in May and June 1864, guarding the supply trains of the Army of the Potomac during the early part of the Overland Campaign. It participated in the siege of Petersburg and Richmond until early December. From 7 December 1864 to 15 January 1865, it participated in two expeditions to Fort Fisher, culminating in the capture of the fort on 15 January. It participated in battles at Sugar Loaf Hill on 19 January, Federal Point on 11 February, Fort Anderson from 18 to 20 February, and the capture of Wilmington on 22 February. From 1 March to 26 April, it participated in the Campaign of the Carolinas, culminating in the occupation of Raleigh on 14 April. It saw its final action at Bennett's House on 26 April. The regiment was present at the surrender of Johnston's army and was on duty in various points in the Department of North Carolina until early December when it was disbanded. Dodge was brevetted Major, U.S. Volunteers, on 15 November 1865, for meritorious service, and was discharged from the service on 4 December 1865, in Wilmington, NC.

After the war, Albert returned to Barre. In 1870, Albert, Laura, and sons Frank and Oramel, were living in Barre. Albert was a house joiner. In 1880, Albert and Laura were living in Barre with Frank and Oramel, and Albert is listed as a carpenter. In 1890, living in Barre, at 21 Silver, his occupation was listed as a carpenter. He applied for a veterans pension in February 1893, and in 1896, he was Officer of the Day in the R. B. Crandall Post #56, Grand Army of the Republic, in Barre. That same year, he lived on 129 Silver, at the intersection with Brook, where he resided until at least 1900. By 1910, Albert and Laura were living by themselves, and he was engaged in building houses. Dodge died 21 November 1914 and is buried in Elmwood Cemetery, Barre. Laura applied for widow's benefits from the government in December 1914.

The top photograph on the left shows Albert as a corporal, while a member of Company B, 10th Vermont Infantry, in November 1862. The bottom photograph shows him as a captain, while in command of Company F, 39th U.S. Colored Infantry, in March 1864.

The Vermont Historical Society has his papers, which include correspondence with his wife while in the service, from 1862 to 1865, and some pension papers, in 1893.

SERVED HIS COUNTRY WITH DISTINCTION
Albert F. Dodge, Who Dies Saturday Evening, Enlisted Early in Civil War and Served Through to the Close – Was Esteemed Citizen of Barre.

A life-long resident of Barre and one of the city's most respected citizens, one of the nation's defenders and brevetted major for gallant and meritorious conduct in the dark days of the Civil war, Albert F. Dodge passed away at his home on North Seminary street Saturday evening at 6 o'clock after less than a week's illness with cerebral hemorrhage. He was stricken in the evening of Sunday, Nov 15, and, although regaining consciousness so that he could recognize the members of his family, at no time was his condition such as to give hope, as his right side was paralyzed and he was unable to talk. Prior to sustaining the shock he was in his usual health excepting for an attack of the grip.

Albert Francis Dodge was born on September 23, 1838, in the house on Elm street now occupied by his son, Oramel J. Dodge, his parents being Oramel B. and Lucy Dunham Dodge. His father's grandfather, Asa Dodge, was one of the town's earliest settlers, having come here in 1791 and settled on what is now known as Beckley hill. When Albert was 12 years of age his father died, the youth being then thrown more or less on his own resources. However, he continued in school for some time, being a student at old Barre academy, and then learned the carpenter and joiner's trade, an occupation which he followed more or less closely all through the remainder of his life.

When 23 years of age he enlisted in the cause of the United States in the Civil war, the date of his enlistment being July 28, 1862, and his company being Co. B of the 10th Vermont volunteers. Before his company left Vermont, or on August 4, 1862, he was promoted to corporal and after less than a year's service, on February 19, 1863, he was advanced to the grade of sergeant, which position he filled until March 21, 1864, when he was discharged from that regiment to become captain of Co. F, 30th U. S. Colored infantry. He served through the remainder of the war and, indeed, three months after Lee's surrender, as his regiment was engaged in police service and in guarding U. S. Property in North Carolina after hostilities ceased. During that long service he was in many engagements, notably at Fort Fisher in North Carolina, and at Petersburg. It is related of his company in the latter battle that every fourth man was put out in that memorable charge either by death or wounds. With the passing of Mr. Dodge only two officers of the 30th U.S.C.I. remain, they being Captains Culver and Hand, with whom Mr. Dodge kept in more or less close correspondence up to within a few weeks. Both of them reside in New York state. Mr. Dodge had five cousins bearing the family name who went into war and one of the five survived, either being killed in battle or dying of wounds or disease contracted while with the army. On March 13, 1865, by act of Congress, Captain Dodge was breveted major for gallant and meritorious conduct.

After receiving his final discharge from the service of his country, Mr. Dodge returned late in 1865 to Barre and to the wife to whom he had been married on Aug. 7, 1862, between the time of his enlistment and his being mustered into service. His wife was Laura Smith Bacon, daughter of John and Hannah Bacon of Barre. The widow survives him as do two sons, Frank Ellsworth Dodge o St. Louis, a chemist with the Barrett manufacturing Co., who arrived home today, and Oramel J. Dodge, a merchant of Barre. Mr. Dodge's only sister, Mrs. Louise L. Boyce, died in this city a year ago last October. There are three grandsons, Malcolm E. And Albert Francis Dodge of St. Louis and Albert Osman of Barre.

Mr. Dodge was for many years one of the best known builders of the community. Latterly he had devoted most of his time to real estate and spring water interests. He was one of the first bailiffs of the old incorporated village of Barre and served some years as a justice of the peace. He was a Republican in politics and he was an attendant at the Universalist church. In fraternal life he was the oldest member in points of years of affiliation, of Granite Lodge, No. 35, F. & A. M., having been initiated on December 24, 1863, when home on furlough from the war. He was a charter member of R. B. Crandall Post, No. 56, G.A.R., and had served several times as post commander. He also was allied with many of the organizations which had to do with the active life of the community through a long period of years and he held the respect and confidence of a large number of people in Barre and vicinity.

The funeral will be held from his late home Tuesday afternoon at 2 o'clock, and interment will be in the family lot in Elmwood cemetery.