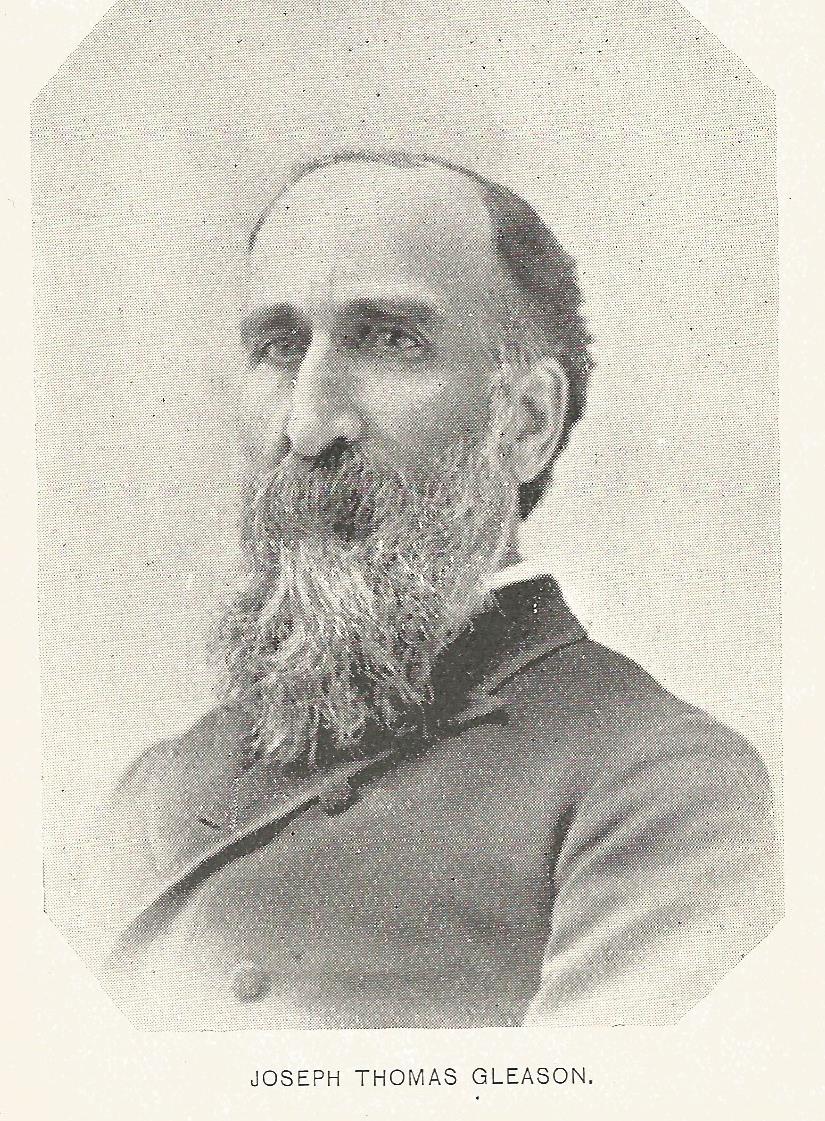 Gleason, Joseph Thomas, of Lyndonville, son of George and Sabrina (Thomas) Gleason, was born in Lunenburg, June 18, 1844. He is the seventh in lineal descent from John Howe of Sudbury, Mass., whose progenitor was John Howe, a Warwickshire squire, and kinsman of Sir Charles Howe of Lancaster in the reign of Charles I. John Howe of Sudbury was one of the petitioners in 1657 for the grant constituting the town of Marlboro, Mass. Both the paternal and maternal grandfathers of J. T. Gleason served in the war of the Revolution, the latter holding a commission as lieutenant in a New Hampshire regiment. His grandfather, Joseph Gleason, came to Lunenburg in 1802 where for half a century he was deacon in the Congregational church. His father, George Gleason, eighty-four years of age, lives in Lunenburg, one of its solid men, a former captain of militia and a deacon of the Baptist church.

After receiving his education in the schools of Lunenburg Mr. J. T. Gleason enlisted in December, 1861, in Co. K, 8th Regt. Vt. Vols., drilled with the regiment for a brief period and was then rejected on account of his extreme youth. Anxious still to serve his country in her hour of peril he re-enlisted in Co. E, 15th Vt. Vols., in August, 1862. When the regiment took up the route for Gettysburg Mr. Gleason, ordered to the hospital by the surgeon on account of illness, refused to obey and marched with his command to Gettysburg, serving with it until it was honorably discharged at the close of its period of enlistment. During the war he contracted disabilities from which he has never fully recovered.

After his return he engaged in agricultural pursuits. In 1874 he began the study of law in the office of Joseph P. Lamson, Esq., of Cabot, and then pursued his professional researches under W. W. Eaton, Esq., of West Concord, until the spring of 1875, when he opened an office for himself. He was admitted to practice at the Vermont bar in 1876 and entered into copartnership with O. F. Harvey, Esq., at West Concord which connection was dissolved in 1877. A year afterward he removed to Lyndonville where he was the first member of his profession to open an office and where he now resides. Well read in the law and trusted by the people of the vicinage he has built up a large general practice embracing the settlement of many estates, while of all the suits he has brought, he has never lost but one. His title of judge he derives from his election to an associate judgeship of the Caledonia county court. Coming to Lyndonville two years before its incorporation Judge Gleason drew up its charter, put it through the Legislature and at once took a prominent part in settlement of the many questions that would naturally arise in the new town and was identified with every step of its progress. His readiness of speech and clearness of statement gave him a prominent place in the deliberative assemblies of Lyndon, where, a staunch Republican, he has been for several years auditor and moderator, also serving since 1886 as chairman of the Republican town committee.

He owns and resides in one of the handsome mansions of Lyndonville, having been married, Sept. 9, 1884, to Mary S., daughter of Roswell and Laodicea (Holbrook) Aldrich. They have one daughter: Louise M.

Judge Gleason is a Congregationalist in his religious belief and has taken a deep and abiding interest in the Masonic order, being a member of Crescent Lodge No. 66, F. & A.M., Lyndonville, and Palestine Commandery K. T., Caledonia Council R. & S. M., Haswell Royal Arch Chapter of St. Johnsbury. He is serving his second term as Grand Patron of the Grand Chapter of the Order Eastern Star of Vermont and is also a member of Farnsworth Post No. 106, G.A.R., of Lyndonville and is its efficient adjutant.

Joseph Thomas Gleason serves as an illustration of a typical New Englander, who, coming out of the war broken in health and without a dollar, commanded success from adverse circumstances.

Judge Joseph T. Gleason died at his home on South street in Lyndonville Wednesday after a few days' illness of angina pectoris. He had been in failing health for some time, but his death came with a suddenness that was a great shock to his friends and the community in which he has long been a prominent and respected citizen.

Judge Gleason was born in Lunenburg June 18m 1844. His paternal great-grandfather served in the Revolutionary war. His father was one of the pioneers of the town of Lunenburg. Mr. Gleason received limited educational advantages in the his youth, but being of a studious disposition and a great reader, he acquired a large fund of practical knowledge which was always of use to him in his long and active life.

In December, 1861, he enlisted in Co. K, 8th Vt. Vols., but was rejected on account of his youth. In August, 1861, he entered the service in Co. E, 15th Vt., and took up his march into Dixie. He served with honor until after Gettysburg and he reached the expiration of his term of enlistment. He has always kept up his interest in military affairs and was a member of the Grand Army and of the 15th Vt. Reunion Society, of which he was the secretary for many years.

On his discharge from the army, he returned to the farm home in Lunenburg where he remained until 1874 when he began to study to the law in the office of J.P. Lamson of Cabot. He was admitted to the bar in 1876 and formed a law partnership with O.F. Harvey in West Concord where he remained until 1878, when he came to Lyndonville as the first resident lawyer in that village. He built up a large and profitable practice.

His integrity and ability was recognized by his fellow citizens in many ways. He was many times moderator in town and village meetings and in1888 was elected assistant judge of Caledonia county court. In the legislature of 1908 he was one of Caledonia county's senators. All these public positions he filled with satisfaction and credit. He as a life-long republican in politics and a member and deacon of the Congregational church, of Crescent lodge, F. And A. M., of Lyndonville, and of Palestine Commandery, Caledonia council and Haswell Royal Arch chapter of St. Johnsbury. He served two years as grand patron of the grand chapter, Order of the Eastern Star and of Farnsworth Post, G.A.R., of Lyndonville.

Judge Gleason was a man of pronounced opinions on all public questions and was well-read and interested in current events. He was a citizen of high ideals and one whose long life of usefulness has helped to lend stability to the best interests of the community. He will be greatly missed in the town in which he has long been a familiar figure and prominent and influential figure.

The funeral will be held Thursday afternoon at the house, with interment in the family lot in the cemetery at Lyndon Center. The deferred date is to accommodate the daughter who is coming from California.