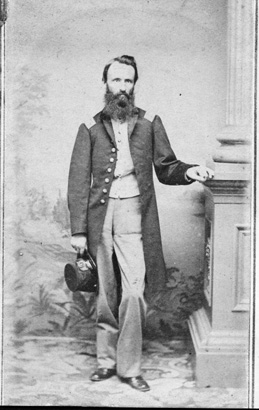 FROM A PRISONER AT CHARLESTON

MY DEAR FRIEND: Your letter of Oct. 3 was received on the 12th, and gave me great pleasure. Though it contained no news of importance, yet the very fact that it came from Vermont made me feel like a new man.

Now that I have nothing to do but think, my mind is always wandering to the green hills of Vermont, and in fancy I sit once more beside the grave of Ethan Allen, and can feel how he must have chafed at being confined to prison, unable to help in the glourious cause of liberty. I never saw my dear little state in so proud of dress as now, and when I think that amid her green hills no traitor dwells, tears of gratitude come swelling up and overflowing my heart

You learned from the papers that we were sent here, but perhaps you don't know that we were selected as the most "insolent and uncomrpromising Yankees in the lot." So said a Virginian; but I think the South Carolinians have found us very well behaved indeed. By the by, speaking of South Carolinians, let me say this: At the north we think them the very firebrands of seccession; the truth is they are the coolest and most courteous men we hve met. They believe is seccession and enter into it with the ardour of patriots. I think they are honest in their opinion, and I would like very well to be exchanged for a South Carolina Captain, that we might fight away just as we think we ought. I may be wrong, but I do think our Government ought to exchange prisoners. We all think so - and feel so - not because we are unwilling to endure the hardships and privations of prison lfe, if it is necessary, or if it will be the means of promoting the cause of freedom, but because we think it is unnecessary, and will do no good. But I find no fault. While sick and discouraged I may have done so, but now I am inclined to wait patiently for the "coming morn."

Yesterday the Lords Supper was commemorated. Some twenty of us were present - it was a solemn, sacred time.

I wish you would write me and give me information of the health of my company. I often think of them, and long to be back with them.

You must remember me to all my friends and rest assured that whetever fortune befalls me I shall not forget that I was born among the green hills of Vermont and have breathed her free, pure mountain air.

FROM A SOUTHERN PRISON-- Captain Drew writes to the Free Press as follows:

Well here I am in another prison, tho' one better than the last in some respects the best yet. We have the privilege of walking about in a large yard by giving our parole that we will not use the privilege to escape. The last line I sent you was written when I was suffering with an attack of fever. At such times I feel as tho' I could not stand this imprisonment long, but when I get better I trust I show more a more soldierly endurance. It is a severe trial to be shut out from all knowledge of and participation in the struggle now so fiercely going on. But I trust all will be for the best. I must write only to tell you of my welfare and good spirits.

John Theophilus Drew, UVM Class of 1863 was bom in Danville, Vt., 8 June 1834, the son of Gilman L. and Cynthia (Ward) Drew. The family removed to Barton in 1841. At the age of fourteen a severe illness left him with lung troubles and unable to do farm work for two or three years. At the age of seventeen John T. went to Barton to attempt work in a clothing store. The confinement and hard work were more than he could endure. He was advised that his lungs must have fresh air, and he tried selling jewelry from trunks strapped over his shoulders. Ere long he found he had not strength for this, and in September 1851, on being told that he must soon die, he dropped his trunks, took the cars for New Bedford and presented himself at the recruiting office of a whale ship and that night slept upon the deck of the ship. In April 1855 he returned home in the same ship after compassing most of the seas of the earth, in better health than he had had for many years.

With some encouragement from President Pease and Rev. Mr. Ferrin of Hinesburgh he went to the latter place in the fall of 1856, studied at the academy under A.E. Leavenworth [1856], and entered the University in 1857.

On the breaking out of the rebellion in April 1861, at the first public call in Burlington for volunteers, he enlisted, threw his whole energies into the work of enlisting others, was chosen and commissioned as captain of Company G, Second regiment. The regiment arrived in Washington and was ordered across the Potomac just in season to take part in the first battle of Bull Run. Capt. Drew was suffering from illness but could not be kept in camp. In endeavoring to follow the retreating rabble of the Union army he was taken prisoner, carried to Richmond, Libby Prison, Salisbury, Columbia and Charleston, whence he was exchanged in the summer of 1862 after fourteen months imprisonment. As soon as sufficiently recruited he resumed his studies as best he could, brought up the deficient topics, took the examinations at the University and received his degree of A. B. in 1863. He soon after enlisted in the reserve corps and was assigned to command at the hospital in Montpelier, which post he held till the hospital was broken up after the close of the war.

About the time of going to Montpelier he married Lucy Lovell of Burlington. Afterwards he engaged in mercantile business at Montpelier and at Rutland, did some work as an editor, traveled in Canada, the United States, through Central Europe, and down the Danube, writing very interesting letters for the New York Times. Then he studied law and did business mainly in Washington, D. C, successfully prosecuting claims for patents, pensions and war damages. For a few years previous to his death he resided in Burlington, carrying on his business chiefly in the larger cities of the country. He was attacked in the city of New York 8 October 1879 with inflammation of the brain, and judging from the first that it would end his life, he hastened home, anxious chiefly to reach his house before consciousness was gone. He arrived as he had hoped, and died 16 October 1879.

His activity of body and brain and his facility of various work have seldom been equaled. The incidents and varied fortunes and adventures of his life, if they could be told, would make a marvellous story. His flashing impulses often landed him in error or danger, and then back into the straight way and upon safe ground as suddenly. His many quick and changeful courses often threw him across the paths of others and made him enemies everywhere. His quick sense of justice and his generosity in time satisfied most of those that were worthy of his friendship. These impulses were often a source of danger to his habits, social relations, and Christian spirit. But many friends trusted the essential integrity of his purpose and made allowance for his impulsive nature. His wife and two daughters survived him.

AN INCIDENT OF THE REBELLION

A young man by the name of Grey left Dorset, Vt. a few years ago and took up his residence in Salisbury, N.C. The rebellion broke out, and when the conscription in North Carolina took place he was forced into the ranks of the rebels He was on duty at the prison where the Union men were confined. There he became acquainted with Capt. Drew of the 2d Vermont, and laid open his plans to him. He informed the Capt. That he was a strong Union man and a true Vermonter, and proved it by many an act of kindness and true courtesy. He also assisted citizen prisoners ( held for being Union men) to escape. After the campaign against Fredericksburg he was promoted to 1st Lieutenant, and this last fall was captured with the whole regiment on the Rapahanock. He is now confined as a prisoner on Johnston's Island. He is anxious to take the oath of allegiance and become once more a genuine Vermonter. The case is before the President. Grey said he had no chance to desert, and claims this as his first opportunity to be openly a Union man. His assurances to Union officers, who were prisoners in the south, , that he should improve the first opportunity to leave the rebel army, and his kindness and sympathy to them while in rebel hands, are strongly in his favor.-----Waltons Daily