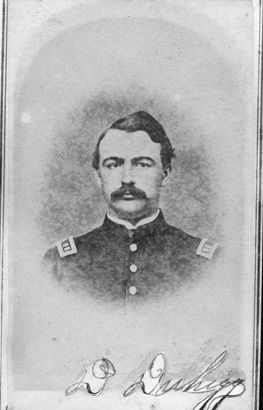 Killed at Berryville, near Winchester, Va., on the 19th day of Sept., 1864, 1st Lieutenant Dennis Duhigg of Lyndon, acting captain of Co. M, 11th Vt. Regiment, aged 24 years. One corps of Union troops broke and pushed back the sixth corps, for some distance, the enemy advancing with demon like yells. The sixth corps formed in line of battle to give the enemy a warm reception, and the order was sent along the lines to charge bayonet; young Duhigg then stepped in front of his company swinging his saber over his head, said "Come on boys, victory or death, " and in the midst of the charge, nobly facing the foe, was shot through the heart. When asked if he had any word to send to his friends, he replied " My last prayer is offered, " and expired without a murmur. Though born in a foreign land he was brought by his father in infancy to this country. He was "rocked in the cradle of liberty." His adopted country was as dear to him as to any other son to the manor born. - When our government called he was ready to go and fight for that same liberty England once conceded as a boon and America claimed as her birthright. He was chiefly instrumental in recruiting the Lyndon company of the 15th regiment, nine month's men, and was subsequently appointed sergeant major in that regiment. - About the time of his discharge authority was given the state to increase the 11th regiment to 2000 strong. Immediately young Duhigg set about recruiting a company and was elected 1st lieutenant of Co. M. when active campaigning commenced, upon the resignation of the captain, he was placed in command of the company, passing through many hair-breadth escapes without an injury until the day of his death. That he was brave and always at his post, his companions in arms all bear witness. In his death his family have lost an affectionate son and brother; The church a worthy member; the community a young man of sterling worth, and one who bid fait to enrole his name high on the escutcheon of fame; but his name will ever be held in high remembrance by his many friends in Lyndon and elsewhere, and he and the many others whose names are inscribed on the roll of honor, nobly dying for the country, will be ranked with the long line of worthies, who have heretofore toiled and in their country's cause bled nobly, each of whom

" Judge - by no more than what you know, Ingeniously, and by the right laid one Of truth, he truly will all styles deserve Of wise, good, just, a man both soul and nerve."