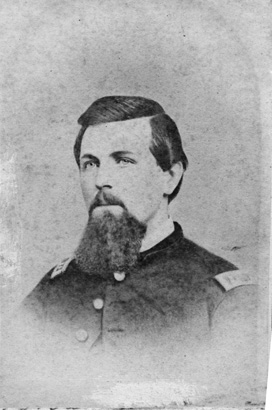 DWINELL - In Baltimore Aug. 24th, from wounds received in an engagement with the enemy near Charleston, Va., Aug. 21st, Major C. W. Dwinell of the 6th Vt. Vols.

Maj. Dwinell was a brave and gallant officer; he never shrank from duty; he never turned his back upon the enemy; he never faltered a single moment in that cause to which he at last gave his life in a noble sacrifice; yes to his country's cause he sealed his devotion with his life. Never in the darkest hour of our country's cause when other soldiers and other officers would murmur and complain, was he known to murmur or be desponding in the least, but he was always cheerful and hopeful, bearing the trials., sufferings and hardships of a soldier's life without a murmur or complaint, believing that in the end all would come out right.

Maj. Dwinell entered the service early in the war as 2d Lieutenant, and for meritorious conduct rose through the different degrees of promotion to that of Major, he having received more commissions than any other officer of his regiment, numbering five, including that of Adjutant, and been commissioned by three different Governors of the State. In the battle of the Wilderness he received a severe wound, the ball lodging in his side, which he wore to his death, and at the earliest possible moment of recovery he hastened back to rejoin his comrades in battle only to die.

He was very popular in the regiment, and had the respect and esteem of every officer and man, and his death will cause great lamentation and sorrow, not only among his near relatives and friends who suffer an irreparable loss but in his old regiment and among all who knew him, for he was but known to be respected. And now to mourning and weeping brother, sister, widow, widowed mother, and especially to the young and devoted wife who is left alone to brave the cold and dark future, I would extend in behalf of the officers and soldiers of the old 6th Vt. Regiment, our deepest and most profound sympathy; and we can truly feel to mourn and weep with you in this sad and almost insupportable bereavement, yet may we feel to exclaim "thy will O God not mine be done."

The deceased, who's obituary I can but feebly give at best, has left a proud record; he has shared in the glory of many a hard fought battle and of the imperishable renown won by the Old Vermont Brigade; his name shall live in its records and be borne down the ------ of time.

In the list of wounded at the battle near Charleston, Va., 21 August, appeared the name of Maj. C.W. Dwinell, of the 5th Vermont Regiment. His wound was not at first supposed to be dangerous, but merely a flesh wound below the knee, but unfavorable symptoms soon appeared, and he died on Wednesday, August 24. His remains were conveyed to Glover, where his funeral services were attended, August 30, by a very large assembly.

Carlos William Dwinell was a son of Ira and Corcas (Ford) Dwinell, was born in Calais, September 8, 1838. In his boyhood his parents removed to Glover, and that was his residence 'till he entered the army. Both at Calais and Glover his father was an inn-keeper, and thus being brought in constant contact with men, he acquired an affability and knowledge of human nature which were of good service to him when he became a soldier. His academical studies were pursued at the Orleans Liberal Institute, where he had a respectable standing as a scholar.

He entered the service of the country in October 1861 as a member of Company D, of the 6th Vermont Regiment, recruited at Barton. Upon the organization of the company he was elected 2d Lieutenant, January 11, 1862, became Adjutant November 1, 1862, was promoted Captain of Company C January 12,1863, and Major a few days before his death. In all these positions he acquitted himself a worthy son of Vermont. He was a soldier with-out fear, and with-out reproach. He had a good deal of manly beauty by which he made favorable impression at first sight, and this prepossession was confirmed by his easy address and the real kindness of his heart. To an unusual degree he was careful of his soldiers, never exposing them to any dangers which he was not ready to share. They were ardently attached to him. They admired him for his bravery, and loved him for his kindness and promptly went wherever he bade, or followed him, wherever he led.

He shared all the hard fortunes of the 6th regiment, and participated in nearly every battle in which it was engaged, but escaped without a scratch 'till the battle of the Wilderness on May 5, 1864, when he received a severe wound near the spine, which disabled him for six or eight weeks. The bullet was not extracted from the wound, and it is probable that the enfeebling effects that prevented him from rallying against his final wound as he might otherwise had done.

Respectfully inscribed to the memory of Major Carl W. Dwinell, who was wounded Aug. 21st, in the engagement near Charleston, Va., from the effects of which he died Aug. 24th, in hospital, Baltimore, Md.

A sorrowing group was standing
Around the dying bed
Of one,who oft in battle
His comrades bravely led,
When it heard the booming cannon
And the shrieking of the shell;
Yet he feared not death's dark angel
For he had done his duty well.

By the bedside stood his comrades,
And his chief beside him,knelt,
None can tell the weight of sorrow
Which; the noble hearts there felt;
Tears were in the eyes of veterans
Who ne'er quailed to meet the foe,
Who ne'er shunned death when battling.
And when duty bade them go.

Then the dying hero mummered,
Could I meet my wife again
Ere I enter deaths dark valley,
It would soothe my throbbing pain
Which I feel at thoughts of parting
From my friends here on life's shore,
Where, above, I hope to meet her,
Where, when met, we part no more.

Tell her when death hovered o're me,
And its chill was on my brow,
Tell her that I n'er forgot her,
Not the morn I took that voe:
That henceforth, I love and cherish,
Until summoned home by death.
Tell her that I truly kept it,
With my latest dying breath.

That the bright hopes which we cherished,
Hope of happy, future years,
Are erased by thoughts of sadness
And the eyes made dim with tears,
Tell her that though I have fallen,
For the banner that we love,
Tell her that I did my duty,
And that we shall meet above.

Then a change o'er his features,
For death's angel hovered nigh,
Then he wispered,"dear Amanda,
Could I meet you, ere I die".
He shall no more lead his comrades
Where is heard the cannons roar,
For his earthly strife is ended,
He has crossed deaths river o'er.

oh: The fearful weight of anguish
Which that widowed heart doth w?lg,
Now that he, her all , has fallen,
Death will have for her no sting:
But for he who doeth justly,
Comfort her with Father's love,
And when with her, life is o'er,
May she meet him there above.

Written for the Newsdealer by: Ben D. House