The Hatch Brothers of Hardwick

Charles Pinckney Hatch, Jr. was born 7 January 1835 in Hardwick, Caledonia, VT. He married 15 July 1860 Ella D. Harris in Danville, VT. She was granted a divorce from him at Grafton, NH on the 4th Tuesday of March 1875, but she re-married him on 5 June 1876 at Danville, VT. Ella D. Harris was born 22 September 1841 at Waterville, ME. She was the daughter of William E. Harris and Caroline S. Packer. They lived for a while in NH, and a son, James W., was born in 1872 in Canaan, NH. Charles Pinckney Hatch, Jr. served in the Civil War. He enlisted in Co. H, 4th Regiment, Vermont Infantry Volunteers at Danville, VT on 21 August 1861, for three years. He was 5 feet 10 inches tall with light hair and complexion and blue eyes. On about 10 March 1862, he became sick with the mumps while camped at Flint Hill near Fairfax Courthouse, VA, and he was sent to a hospital in the barracks at Newport News, VA on about 19 April 1862. At this time, his Regiment was moving from Camp Griffen, VA to Alexandria, VA on its way to the Peninsula. While in the hospital, he contracted a bilious fever and chronic diarrhea. He remained hospitalized for nearly 6 weeks. On 16 May 1862, he was sent by hospital ship to another hospital in Philadelphia where he remained until May or June of 1862. When he was released from that hospital he was given a 30 day furlough because of ill health. At the end of his furlough, he reported to a Marine hospital in Burlington, VT on 8 August 1862. He was returned to active duty on 20 September 1862, but was unable to rejoin his regiment. He was sent to General Headquarters and assigned light duty as a wagoner and as a forage master. He held the ranks of Private and Corporal. He remained in poor health but served his full term in the Army. He was discharged at Brattleboro, VT on 30 September 1864. Charles P. Hatch, Jr. died on 14 Nov 1896 of chronic diarrhea and associated conditions, the same disease he contracted in the Army.

Marshall T. Hatch was born 25 June 1839, in Hardwick, VT. He married 20 December 1865, Alma Nancy Clark in Hardwick, VT. He died 3 April 1913, in Lena Valley, Gridley, Kansas. Marshall Hatch served in the Civil War. He enrolled as a Corporal in Company B, 3rd Vermont Regiment of Infantry Volunteers, 1 June 1861, and mustered in on 16 July 1861. He was 6' 0" tall with a light complexion, red hair, and blue eyes. He re-enlisted as a Sergeant on 21 December 1863. He received wounds described as slight to the neck and right knee on 19 September 1864, at the Battle of Winchester when he was hit by "minnie" shot. He was recommended for promotion to 2nd Lieutenant on 18 October 1864, but on the next day, 19 October 1864, he again was wounded in action at the Battle of Cedar Creek, Winchester, Virginia. He was again hit in the right leg, this time with grape shot. The ball shattered the bone in his leg and necessitated the immediate amputation of his right leg in the lower third of the thigh. According to one account, he lay wounded by the side of the road and watched as Maj. Gen. Philip Sheridan rode past near the end of his famous ride. Some men, one of whom was named Gage, finally carried Marshall T. away from the edge of the road in a blanket to avoid the riders. This story cannot be verified and should be considered a family legend. He was discharged from service 25 July 1865, as a 1st Sergeant. After the war, he published the Hardwick Reporter out of East Hardwick for about two years, then moved the operation to North Troy, VT. In 1881, he sold the North Troy Palladium to his nephew, Mr. A. H. Butterfield. On 4 July 82, Marshall moved west and settled his family on the relinquished claim of Jack Banta 7 miles southwest of Pierce, Nebraska, where he and his family lived in a sod house for 4 months. He auctioned his belongings on 4 Feb 1896 and left this homestead for Gridley, Kansas on 27 Feb 1896. The sign advertising the auction offered "free lunch for man and beast". 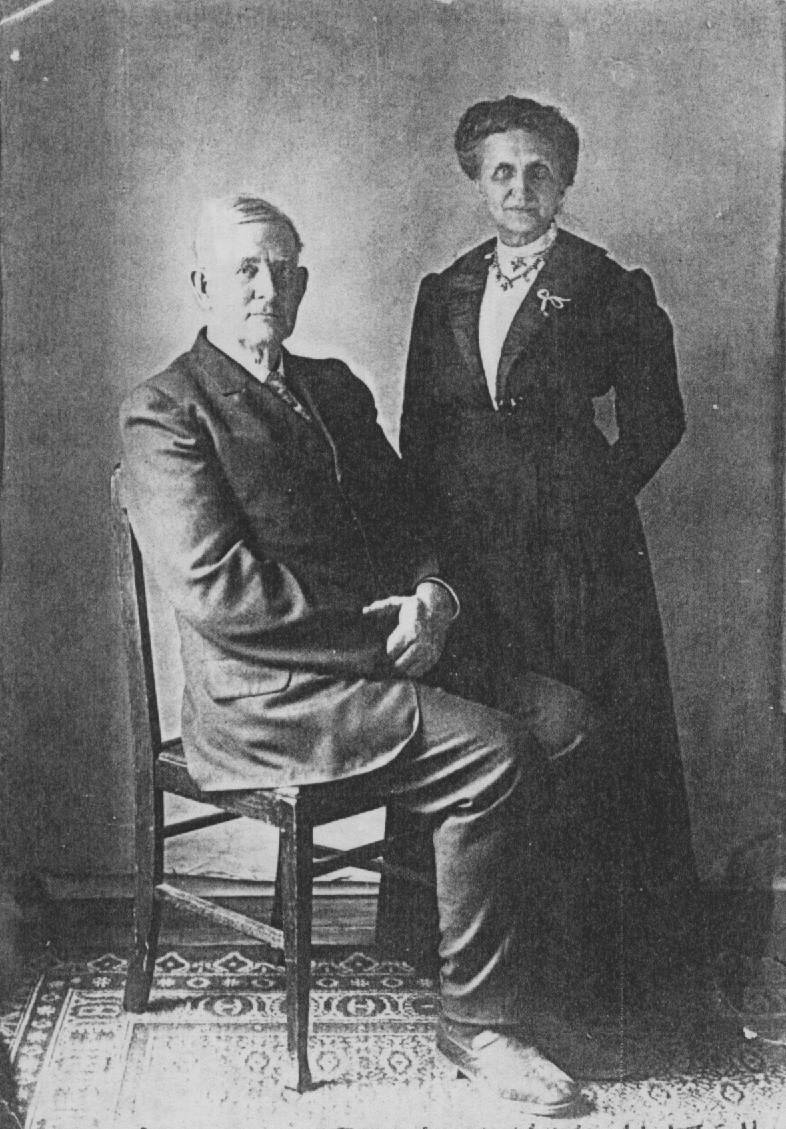 Clarence Augustine Hatch was born 6 March 1847 in Hardwick, VT. He married 5 December 1871 Anna Eldora Davison in Hardwick, VT. He died 30 May 1920, in Brightlook Hospital, St. Johnsbury, VT and was buried in Danville, VT. Clarence served in the Union Army during the Civil War. At the age of 18, he enlisted at Hardwick on 25 August 1864, and was mustered in 3 September 1864, as a Private in Company C, 1st Regiment, Vermont Cavalry. His physical description showed him as 5' 9˝" tall with a sandy complexion, red hair, and blue eyes. He joined his regiment at Bridge Water, Virginia, on 1 October 1864 and was captured during an engagement at Mt. Jackson, Virginia six days later. He was held at Libby Prison for about four months and became very ill while there. He was admitted to Hospital 21 at Richmond, Virginia, on 4 January 1865. He was paroled at Cox's Wharf, Virginia, 5 February 1865, and furloughed from 17 February 1865 to 19 March 1865. He received an honorable discharge at Burlington, Vermont on 21 June 1865. When he returned home to Hardwick, he was in very bad shape. William D, Bronson, a former neighbor, filed an affidavit in support of his pension application stating that at his return home from war Clarence was, "very poor in flesh and so weak that he could scarcely walk across the floor. I did not think he could ever recover and for a few months or more could not see any change." Clarence's ailments included heart trouble, chronic diarrhea, scurvy, herpes, disease of the gums and lower extremities, lung disease, and malarial poison causing general disability. In 1899, after being denied an increase in his pension, he filed an appeal to the Secretary of the Interior, stating, "I am pensioned at the rate of seventeen dollars per month which is not commensurate to the degree of my disability from pensioned causes. I consider one dollar per month increase an insult to any soldier who suffered the tortures of Libby Prison for four months." Clarence somehow lost his right hand and wore a hook; it was not a war injury.

Clarence A. Hatch of Danville passed away May 30 after a long illness. His heart at the last failing of a disease from which he has suffered since his army life.

Mr. Hatch was born in Hardwick March 5,1817, in the "Stone House" on the farm where his father and grandfather had lived before him. He was the son of Charles and Lydia (Taylor) Hatch, one of a family of 14 children, 12 of whom lived to have families of their own. Aug. 18, 1864, Mr. Hatch enlisted in Company C, 1st Reg. Vt. Cavalry Volunteers. He was taken prisoner Oct. 7, at Sheridan's raid in the Shenandoah Valley, Va., and carried to Libbey prison from where was paroled Feb. 5, 1865, and discharged from service June 23, 1865.

On Dec. 5, 1871 he married Anna F. Davison of Hardwick. To them were born one daughter and seven sons, of whom three sons are living.

Mr. Hatch was a member of the G. A. R., and on March 17, 1864, was appointed Aid-de-Camp on the staff of Commander C. F. Branch, where he served four years. The G. A. R. Was represented by delegations from Peacham, St. Johnsbury and Danville.

The funeral service was held at the Methodist church, June 2, the Rev. David Highland officiating, who honored Mr. Hatch as a man he had learned to respect during his three years' acquaintance.

The many beautiful flowers and large attendance spoke eloquently of the respect of the people of Danville for the deceased. Interment was at Danville.