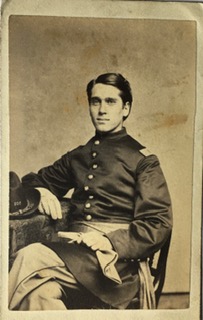 Morning Oregonian
VOL. LII-NO. 16,125 PORTLAND, OREGON, TUESDAY, JULY 30, 1912.
RETIRED SOLDIER DIES
GENERAL FORREST H. HATHAWAY EXPIRES SUDDENLY Held Position of Quartermaster at Vancouver Baracks at Time of Retirement.
Brigadier-General Forrest H. Hathaway, United States Army, retired, veteran of the Civil War and succeeding Indian wars and one time quartermaster of the Department of the Columbia at Vancouver Barracks, died suddenly yesterday morning at 10:30 o'clock at his in the Whitehall. Death is thought to been caused by hardening of the arteries.
Following his return from a customary morning walk his wife heard him call from the bottom of the stairs and went down to assist him. In their apartment he stood by a table for a moment to drink, then fell to the floor, dying before Mrs. Hathaway could summon help.
General Hathaway was born in Vermont, October 7, 1844. September 4, 1862, he entered the Union Army as a private in Company G, Sixteenth Vermont Infantry. He was commissioned captain in the One Hundred and Seventh United States Infantry Jun 30, 1864; was brevetted Major in July, 1866, and honorably mustered out in February, 1867, having served through most of the Civil War. In March, 1867, General Hathaway was appointed Second Lieutenant of the Forty-first United States Infantry, promoted to a First Lieutenancy of the Fifth United States Infantry in 1878, and appointed Captain in the quartermaster's department in 1882.
He remained in this department, passing through the successive grades of Major, Lieutenant-Colonel and Colonel, until January, 1904, when he was made a Brigadier-General, and, upon his own application, after 40 years' service, immediately retired.
General Hathaway served for 13 years through the Indian wars in which General Miles was the commanding officer. At the time of his retirement he was quartermaster of the Department of the Columbia, with headquarters at Vancouver Barracks. Since then he had made his home in Portland. He is survived by his widow, a daughter-Mis Lulu Hathaway-and a son-Paul, a sergeant in the First United States Infantry, who is now at Fort Leavenworth taking an examination for a commission.
Contributed by Bob Hackett.