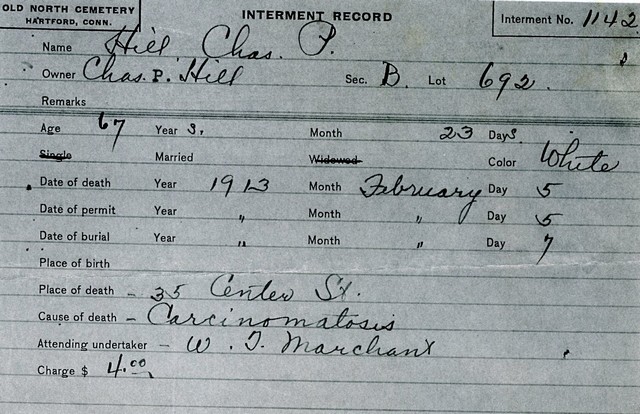 Charles Parson Hill, 69 years old, a Civil War veteran, died at his home, No. 35 Center street, early yesterday morning after a long illness. He was born January 12, 1844, at Quechee, Vt., the son of Henry J. And Laura J. Hill. He learned his trade as a printer when a boy in Clinton, Vt., and had worked at it during the rest of his life, with the exception of the four years from 1861 to 1865, when he fought in the Civil War. When he enlisted in the First Regiment, Vermont Volunteers, he was 18 years old. He participated in many important battles, principal among them being the Battle of Antietam and the Battle of the Wilderness. For his bravery he was made a corporal and later was promoted to sergeant. At the close of the war he was given a handsomely inscribed testimonial by the governor of Vermont. After the war, Mr. Hill returned to his native town, and came to Hartford in March, 1865. He secured employment at the Case, Lockwood & Brainard printing establishment. Five years later he entered the employ of the "Times," where he remained until last May when he was forced to retire on account of ill health. Mr. Hill married Katherine J. Evans of this city November 26 1967. One son survives of the four children born, George E. Hill, a member of the Hartford Fire Department. Mr. Hill was a member of Crescent Lodge, Knights of Pythias, and the Typographical Union.