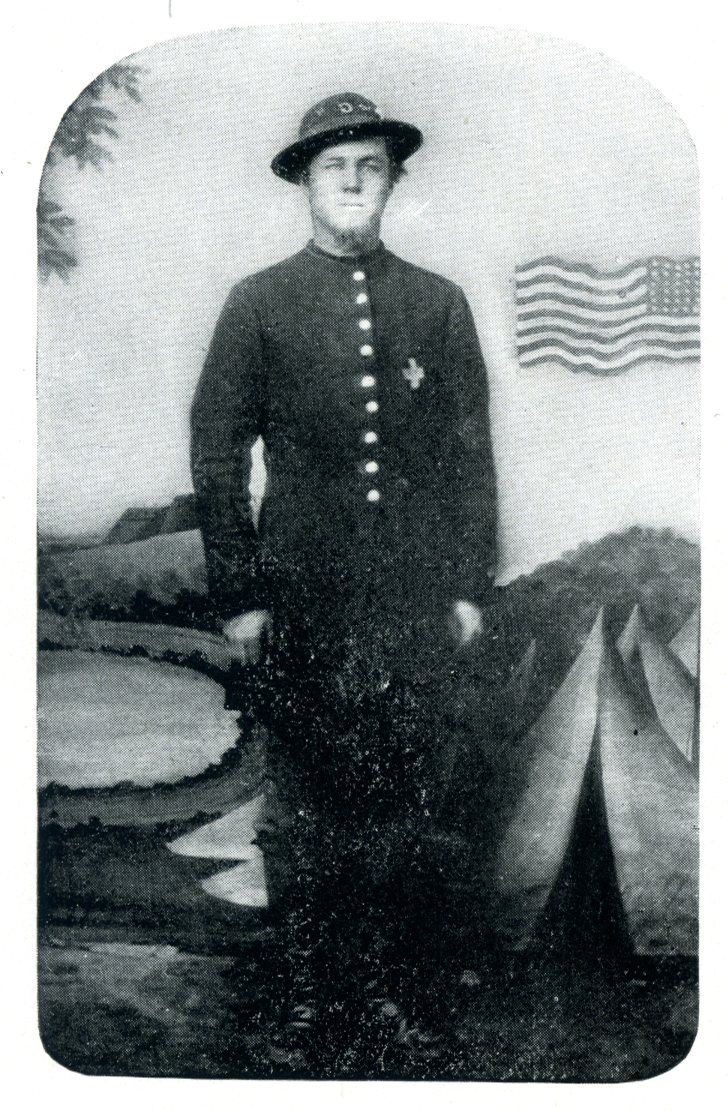 STEPHEN JOHNSON was born In Fayston, April 15th, 1841, enlisted from Fayston. He was 5 ft. 10 in. in height and well proportioned. He was among the number who had the measles at Wolf Run Shoals but soon recovered except that he lost his voice entirely for about two months, but during that time he had charge of the cook's stand and got along very well. Before our march to Gettysburg he was all right and was with the company doing good service to the last. He re-enlisted August 26, 1864 in Co. G, 6th Vt. He enlisted for Waitsfield but by arrangement between the towns he was sent to the town of Weybridge, Vt. He was with the regiment in all engagements till it mustered out. Since the war he has followed the carpenter's trade and has lived in North Fayston. He has enjoyed the confidence of his fellow townsmen as shown by the fact that he has held some town office almost constantly. He has been lister for over 25 years. Also school director, justice of the peace, road commissioner and town grand juror for varying terms. He represented the town of Fayston in 1882. He married Jennette Boyce, of North Fayston, who died in 1906. He has three sons, James M., Herbert and Martin L. Comrade Johnson is commander of Ainsworth Post, G.A.R., at Waitsfield, which office he has held for several years and he is seldom absent from a meeting although he lives five or six miles away.

News of the death of Stephen Johnson at his home in Moretown yesterday morning was soon received here. Mr. Johnson had a shock the first of last week and had been in a serious condition since, having been unconscious since Friday. He was born in Fayston 77 years ago, the son of Ebenezer and Martha (Fischer) Johnson. He married Miss Jeannette Boyce, who has been dead many years. Mr. Johnson was a veteran of the Civil war, having enlisted in Co. C, 5th Vermont, and attended here for many years, until feeble health prevented, all gatherings of Dillingham post, G.A. R. He is survived by three sons, Walter Johnson and Herbert Johnson of this town and Merton Johnson of Duxbury, and four grandchildren, also three sisters and one brother, Frank Johnson of Moretown, Mrs. Lillian Sterling and Mrs. Martha Hutchins of Duxbury and Mrs. Emma Babcock of this town. Arrangements for the funeral have not yet been made.