John Kennedy of No. 64 East street was found dead about 7 o'clock yesterday morning in a lot in the rear of his house. He left home at 5:30 o'clock on the previous evening in apparently good health, but when he did not return home at the usual hour the family surmised that something must be wrong. No search was instituted until daylight yesterday morning. As Mr. Kennedy's body was frozen stiff it was quite evident he had been dead several hours. His death is attributed to heart disease, with which he had been afflicted for some time.

Mr. Kennedy was born in county Kerry, Ireland, about 75 years ago and came to this country and to Rutland about 50 years ago. He served one year in the 7th Vermont regiment and nine months in the 14th Vermont during the civil war. Mr. Kennedy is survived by his wife, to whom he was married in 1860; two daughters, Mrs. John Kelly of Bellows Falls and Miss Josie Kennedy of this city, and two sons, Thomas F. Kennedy of this city and Charles R. Kennedy of Denver, Col.

The funeral of John Kennedy of East street, who died suddenly last Friday, was held at St. Peter's church yesterday morning at 9 o'clock, Rev. J.B. McGarry officiating. A large delegation from Roberts post, No. 14, Grand Army of the Republic, was present. The floral gifts included a Maltese cross presented by Roberts Relief Corps. The casket was draped in an American flag. The bearers were Joseph Rice, A.P. Waite, J.B. Needham, E.H. Webster, J. P. Crowley and Frank Perkins, all members of Roberts post. Among those present from out of town were Mr. And Mrs. John Kelly and Thomas Kennedy of Bellows Falls. 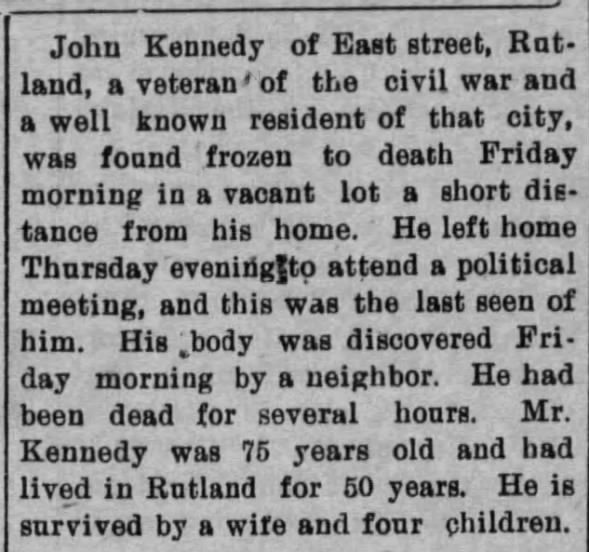