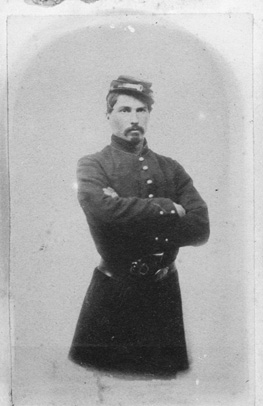 To the great drain from the young, the noble and the enterprising of Vermont's population, occasioned by emigration to the West, t`here is now to be added a frightful loss to the State, from this same call of her population in her many true and gallant sons whose lives are yielded up in this grand but terrible struggle for national life and national honor.

Among this class, of those too rich in positive virtue, too strong in manly characteristics, and too high in nobility of purposes, to well be spared from the State, may have been safely ranked the late Lt. Hiram Bailey, of the 2d Regiment, who was killed in battle at Coal Harbor, Va., June 3d, 1864, by a piece of a bursting shell thrown from a rebel Battery.

Lt. Bailey was the 2d son of Hiram and Rebecca (Weir) Bailey, and was born in Hubbardton, Rutland County, Vermont, August 24th, 1835. His parents were both natives of Rutland Co. - the father of Rutland and the mother of Hubbardton.

After receiving a good common school education Hiram learned and followed the trade of his father, that of a carpenter, up to the period of the breaking out of the present rebellion, and at which he was an expert.

In 1847 the family removed from Hubbardton to Brandon Village and in 1852 the father died, after which Hiram had the main care of the family and discharged with signal kindness and fidelity every duty thus devolving upon him.

Upon the breaking out of the rebellion, his naturally brave and loyal heart throbbed with an earnest patriotism, and he longed to participate actively in the maintenance of our country's laws and unity. He was among the fist from Brandon to enlist for three years service, Brandon having furnished one company of three months; men, enlistments for the 2d Regiment were slower in this than some towns that had furnished fewer or no three months' men, and young Bailey's impatience to reach the scene of conflict led him, against the wished of many in Brandon, to go out of town to enlist. He enlisted in the Castleton Company, under Captain Hope, (afterwards Co. B of the 2d Regiment) after the company had been mainly organized, and was given the place of Corporal. Commencing with the first battle of Bull Run, he was a participant in every fight of the Regiment, passing safely through the long list of engagements up to and including the bloody battle of the Wilderness, soon after to taste a soldiers' death in the fight at Coal Harbor, only 17 days before his term of service would have expired.

Lt. Bailey's mother and three brothers survive him, the mother, the younger brother and W. H. H. Bailey, the 3d son, residing in this village, the latter being employed in Howe's Scale Manufactory, as was also formerly, Lt. Bailey. Samuel W., the oldest brother was a member of Co. I of the same Regiment as Hiram and still remains in the service, being one of the re-enlisted veterans of the 2d. He was a young man of more than ordinary intelligence and natural abilities, of irreproachable character, beloved wherever known, and a soldier of a tall and commanding appearance and cool and conspicuous bravery. His death, thus early in life and while the bow of promise bent smilingly over his future, is a public loss, a material sacrifice for freedom, honor and country.