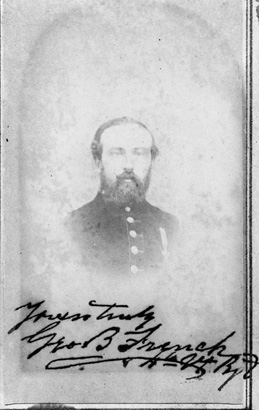 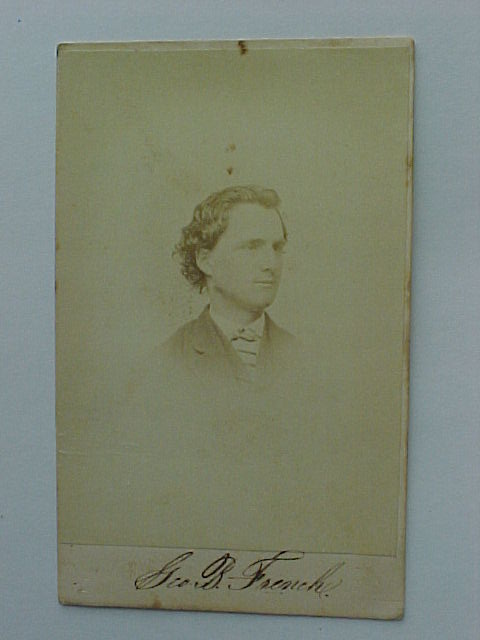 George B. French, son of Calvin and Valeria (Blood) French, was born in Cavendish (Proctorsville) Vt. He prepared for college in the schools of his town and entered the University in 1852, remaining two years. He engaged in business in Davenport, la., 1853-56; St. Paul, Minn., 1856-59. In September, 1859, he returned to Cavendish, and engaged in business until 1861, when he entered the army.

He enlisted as a private in Co E, 1st Vermont Volunteers, May 2, 1861; was promoted 1st sergeant; served at Fortress Monroe, Va., for some time; was mustered out of service August 15, 1861. He was commissioned 1st lieutenant Co. C, 4th Vermont Infantry, September 3, 1861; was promoted adjutant, July 17, 1862. At the battle of Lee's Mills, Va., April 16, 1862, he was distinguished for his gallantry in carrying orders from Colonel Stoughton to General Smith under the heavy fire of Mott's and Ayres' batteries and for assisting in carrying the wounded from the field. He commanded his company through the Peninsula campaign and on the retreat before Richmond. He was again conspicuous for bravery at the battle of Fredericksburg, May 5, 1863, his horse being shot under him during the engagement. He served with his regiment in August, 1863, in suppressing the draft riots in New York city; took part in the battle of the Wilderness, being severely wounded, May 5, 1864; was confined in the United States Naval Hospital at Annapolis Md., several weeks. He rejoined his regiment in the Shenandoah Valley, taking part in the battle of Winchester; was mustered out of service with his regiment at Brattleboro, Vt., September 30, 1864. He then served as deputy provost marshal of the 2d Congressional district of Vermont, October, 1864 until January, 1865. He was commissioned captain Company F, 26th New York Cavalry (Frontier Cavalry) January 10, 1865, and served with his company at Burlington and St. Albans, Vt., until the close of the war; was mustered out of service June 26, 1865.

He is a Republican in politics and has held several positions; was county clerk of Windsor County, Vt., and clerk of the Supreme Court and the court of chancery for his county Jun 20, 1867, until his resignation, March 1, 1885; represented Woodstock in the House of Representatives, 1884-85, serving on several important committees. In September, 1885, he removed to Fremont, Neb., where he has engaged in farming to date.