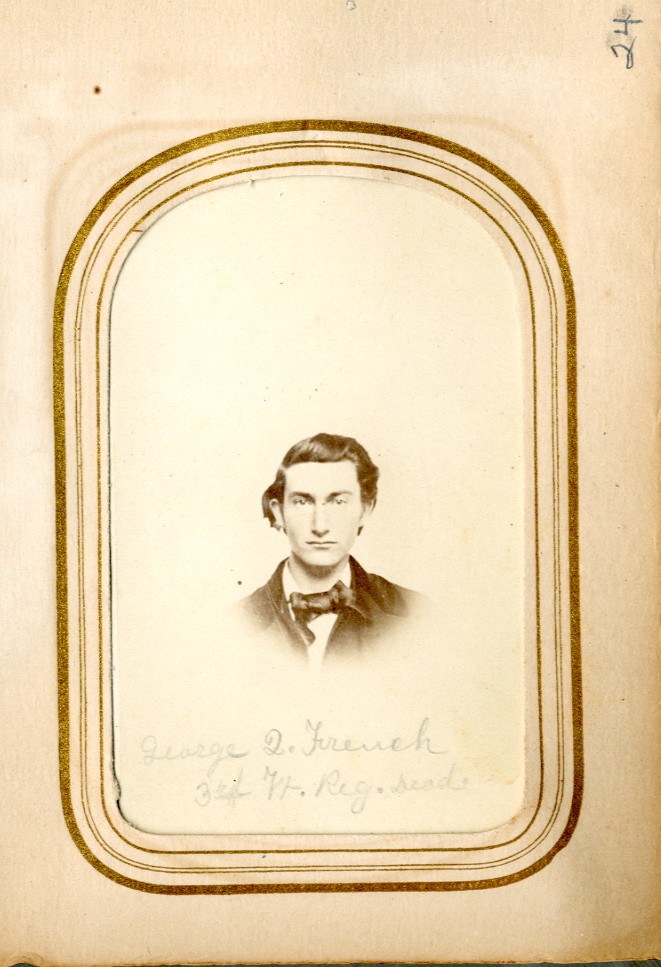 LETTER FROM THE SEAT OF WAR

We publish the following in place of any other account of the dreadful blunder made by our troops on the night of Saturday last.

Mr. Editor: Anticipating that the country will be flooded with telegraphic dispatches, containing exaggerated reports of the catastrophe near Falls Church, Saturday night, and knowing that among the readers of your paper are many who will be looking with painful anxiety for a detailed account, I venture to write you a brief statement of facts, as they have transpired within my knowledge. I can not write particulars, as I was not with the regiment.

It appears that about 8 or 9 o'clock Saturday evening, orders were issued for the men to provide themselves with two days ration, and prepare to march.

At what hour they left camp, I am not informed, probably not far from midnight. Our force had been increased by the arrival of seven regiments since 4 o'clock on Friday, including the Vermont 4th & 5th; also a regiment of Pennsylvania cavalry, which figured conspicuously in the disaster.

Having arrived near the enemy, the troops being scattered about on different roads, and advancing as to make a combined attack, two divisions came unexpectedly in contact,----the 1st California regiment, Baxter's Philadelphia Fire Zouaves, and Mott's Artillery, on one side, and the Pennsylvania cavalry on the other. The cavalry being totally ignorant of the country, and knowing that they were near the enemy's camp, very naturally supposed the other party an enemy, and at once opened a galling fire upon them, which was promptly returned by the infantry. The artillery was hurried into position, and was just ready to open with canister and grape shot, upon the supposed enemy, when Gen. Smith's aid galloped up and ordered them not to fire, for they were our own men.

The Vermont 2nd was fired into by our own pickets and returned fire. Several were wounded, but I think none were killed. Our regiment, the 3d, was not fired upon, but one man that got astray was fired at, four balls passing through his clothes, and one through his hand. This was, I think. is about all the shooting which was done. I cannot learn as a rebel gun was fired. The extent of our loss I have not been able to learn definitely. Yesterday it was reported here at the bridge, to be five or six hundred; but it is now reduced to about seven or eight killed, and about the same number carried to Georgetown Hospital wounded. The number of wounded in camp I cannot learn.

The enemy took alarm at the firing and evacuated Fall's Church and Munson's Hill; leaving their prisoners and spiking their guns. Both their positions are now occupied by Federal troops. The statements I submit, supposing them to be plain, undisguised facts. Being stationed at Chain Bridge, I have heard and sifted all the vague floating rumors from the first, and these may be relied upon as facts. Although there were no engagements with the enemy, there was a decided advantage gained, which once gained, you may rest assured will be maintained.

Hoping that ere long you will receive news of still greater importance than this, I remain Sir, very respectfully,

P.S.----- There is heavy firing up the river this morning in the direction of Gen. Bank's division.

Mr. M. French, of Johnson has handed us a letter from his son George dated at Camp Griffin, Feb. 11th (1862), from which we extract as follows:

I had finished a hard day's work and been away for a while in the evening, so I only had time to read your letter, between roll call and the bugle blast for extinguishing lights.

That day the boys had got their guns and accouterments, and I had to help them prepare for inspection, on the morrow. There were straps to be put together, belts to be fitted, boxes, belts, and straps to be blacked, and brasses to be scoured and polished, guns to be cleaned and polished, ramrods and bayonets to be brightened and a general and important preparation to be made for coming out for the first time all "bright and shinning" And I must see to it all; they knew nothing about it. "Corporal, is this right?, Corporal, help me., Corporal, will this do?" and such like expressions saluted my ears from 1 o'clock 'till dark, almost without cessation. But I lived through it, and had the satisfaction of seeing the boys come out in good time the next morning. It seemed a little tough at first to be put in with a whole crew of "greenies," but as they become accustomed to the ways and duties of camp, and as they shake off their homesickness, they are a very fine lot of fellows.

Yesterday morning we had orders to "strike tents" immediately.

The boys heart's began to beat to a lively tune at the prospect of moving; and perhaps some nerves trembled slightly that they thought that ere the setting sun, they might be marching through fields of bloody gore. But it was soon transpired that we were not yet on the move. We had had a month of storm and mud, and now was a pleasant day --- a chance to air the tents and our clothes So we pulled down our white houses and laid out our beds and blankets. This opened a way for the sun to shine in upon the ground which has not been dry for months. I spent two or three evenings with the ladies' while they were here, one evening, staid 'till after the roll call, and got reported, and had to go on picket before my turn, to pay for it. I think they got a very good idea of camp life, "indoors" but we never have had so muddy a time before, and probably never will again, as it was, during the time they were here. But they seemed to enjoy themselves very well, nevertheless. It seemed real home-like to have them here --- I wish they might have staid all winter.

You wish to know how we spend the Sabbath, really, if it wasn't for the weekly "inspection" we would hardly know when Sunday had come.

The first thing in the morning we set about cleaning our tent, and arranging things in shape. We do what we can Saturday, but have to put off the finishing touches in the morning. The same with our guns and other articles.

At eight o'clock we all have to go out on the parade ground and be examined by the Colonel, or other commanding officer. This occupies from half an hour to two hours; after that we go into our tens and seat ourselves around our beds, and wait 'till the Colonel comes around to inspect the tents. After this we busy ourselves as we can 'till noon, after which we saunter off to other regiments or where-ever we please, 'till dress parade, at four o'clock.

To speak plainly and truly, we do not, have not, had any Sabbath day. No public service, no prayer meetings, no nothing that looks like a Christian Sabbath. While Mr. Parmelee staid, there used to be some kind of show kept up, but it was 'only a show". But since he left there has been no show of at all of Sabbath exercises. However we have got a new Chaplain, and I hope we will have different times. I heard him last Sunday week, and I liked him very much; he seems to be a man of intelligence, energy and amiability: the very essentials points of a Chaplain. I wish I could just step into church at Johnson some Sabbath; it would seem so good. I have not forgotten that promise Mr. Dougherty made to the soldiers, and I well know that he does not forget it either, and I often think of, of a Sunday, of the quiet congregation gathered to listen to the gray-haired old man and wish myself with them. No, mother, though the Sabbath is sometimes, yes often, spent in carelessness, those Sabbath's of the past, and of the present, far away in Johnson, are by no means forgotten.

Poor William Merriam! He has met with a sad misfortune.' is a sad, sad fate, indeed, thus early in life to receive such a crippling blow. Poor fellow! How I pity him. And yet, he may be proud of the crippled arm, as he would be of the glittering stars on his shoulder. The struggle in which he was wounded, was probably the most desperate engagement which has taken place during the war, and a wound received in that action, will ever a sufficient guaranty of heroism, bravery, and honor. Joseph Gilman was here some two months ago. I've not heard of him since. George Dunton, I think, is all right. George Garvin was sick for a long time in the fall, but is well now, though he has not yet been returned to duty.

(The writer here says that the order of Gen. Brooks in relation to wearing boots, has been countermanded. As we understand him, Col. Veasey was put under arrest, on account of some action in some way connected with the "boot order" He also states that Col. Hyde has for several days under arrest, but not say for what. We infer, though, that his offense is similar to that of Col. Veasey, Editor)

The following is an extract from the sermon preached in this place on Sabbath the 23rd ult., occasioned by the death of the soldier hereafter named:

GEORGE Q. FRENCH died in the hospital at Fort McHenry, Nov. 4th, 1862. This young man was the second son of Mr. Mark French, of this town. He was born June 1, 1838, and consequently at his death was a few months over 24 years of age. We, who knew him, remember him with affection. He was a young person of very excellent moral habits; with a great sense of reverence for God and for good men. He was very filial, never seeming to fail in love for his parents and duty towards them. Their honor he cherished to an extent rarely excellent in young men. The happiness it would give them in his absence to be informed of his faultless conduct did much to secure such faultlessness. But as he was of a reflecting turn and reasoned much to himself as an accountable person before God, he consequently acted in the development of his conduct from a deeply settled self-respect. He was independent but not insolent. He loved study, as it tended to mould character; just as he loved good men and the Bible, because they inclined him to moral excellence. He was not free from defects, but he was free from faults as any young man I ever knew. To satisfy me that he died trusting, penitently, in the adorable Saviour, I need no testimony from the hospital, though I doubt not that such testimony will come from thence.

Of the many young men whom I have known at this Academy, who were an honor to it, and who the trustees affectionately remember, I can recall the name of none other more deserving than that of George Q. French.

He entered the service of his country June 1st, 1861, on his 23rd birthday. His army life, as his previous life, was characterized by a very faultless morality and obedience. We who have lost no near relative in this war can but poorly appreciate the sacrifice over which our beloved brother and sister French today mourn. Johnson, Vt. Dec. 11, 1862