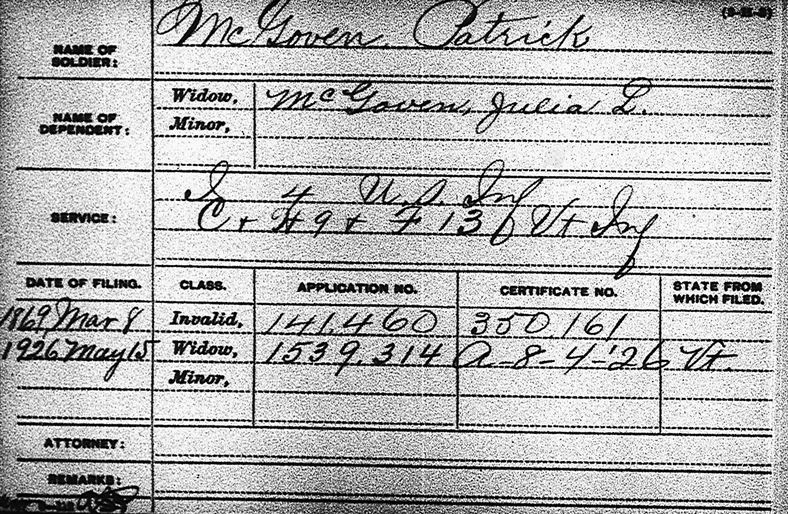 Patrick McGovern passed away at his late home in Richmond Wednesday afternoon, March 17, after one week's illness with heart disease. The deceased was born in Newport, County Mayo, Ireland, May 10, 1845, coming to the United States at the age of ten years. Mr. McGovern served in the army during the period of the Civil War, enlisting from Jericho December 4, 1862, in Company H, Ninth Regiment, Vermont Infantry Volunteers. At the close of the Civil War he reinlisted in the Fourth United States Infantry, Company I, and served one year therein. The deceased was twice married and is survived by his wife and six children. Lawrence, Bernard, Thomas, Martin, Charles, and Leo, and seven children by the first union, John, William, Frank, Anna, Kathryn, May, and Agnes; also eight grandchildren and one great-grandchild. The deceased had been a resident of the town of Richmond for the past 62 years. The funeral will be held Saturday at 9 o'clock at Richmond.

The funeral of Patrick McGovern who died at his late home March 17 was held Saturday morning in the Church of the Holy Rosary at 9 o'clock, the Rev. Francis Welch officiating. Burial was in the Catholic cemetery. The bearers were his six sons, John, Frank, Thomas, Martin, Levi, and Charles. Among those from out of town to attend the funeral were John McGovern of New York city, Mr. And Mrs. Henry Wiley of Boston, Frank McGovern of Craftsbury, Mary and Agnes of Burlington, Mr. And Mrs. Thomas McGovern of Cambridge, Mr. And Mrs. Charles McGovern of Roxbury, Mrs. Payton Bradley of Morrison, Ill., Mrs. Patrick Free, Mrs. Peter McGrath and Mrs. McMahon of St. Albans, Mrs. Elizabeth Crosby, Mrs. John Glynn and son Robert, Mrs. John McKenzie, Burlington, William McGovern and Stephen Craig of Attleboro, Mass., Arthur O'Brien, Charlotte, Mrs. Mary Fraser and son, Robert of Montpelier, Mr. And Mrs. Charles Gibbs, Essex Junction, Miss Elizabeth Noonan, Proctor. The floral offerings were many and beautiful also a number of spiritual bouquets. Mr. McGovern was one of the three surviving members of the Civil War veterans of this town and a highly respected citizen for the past 62 years which had been spent on the home farm.