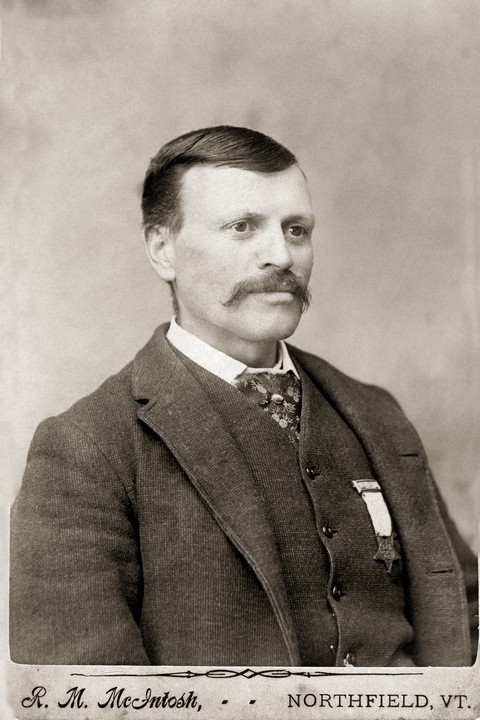 Northfield Nov. 12 --- Charles C. Gokey, one of Northfield's old residents passed away early Sunday morning at Heaton hospital, Montpelier. The remains, accompanied by his youngest son, Charles Gokey, were brought to Northfield and taken to the home of his daughter, Mrs. George E. Davis, on Vine street.

Mr. Gokey was injured on Oct. 5, when he was struck by a team in Montpelier and knocked to the street, receiving a broken hip and other injuries. Since that time Mr. Gokey has been a great sufferer but showed utmost patience and up until about a week ago his mind was very keen and he was most appreciative for all the kindnesses done for him and pleased with his many cards and words of sympathy sent to him by his many friends.

On Feb. 2, 1868, Mr. Gokey was married to Ellen E. Johnson in Barre. To this union were born seven children; one died in infancy and six survive their father. Mrs. George E. Davis of Northfield, Mrs. L.G. Derick of Montpelier, Frank Gokey of Everett, Mass., W. O. Gokey of Boston, Dr. Harry Gokey of Bridgeport, Conn., and Charles N. Gokey of Montpelier, a family which has been very closely associated and most devoted children to their father and mother during their lives. Mrs. Gokey died just six months ago from the effects of a broken hip which she sustained some months before her death. A very peculiar coincident and very sad one was that both Mr. and Mrs. Gokey should be afflicted in the same way during their last days.

Mr. Gokey had been a resident of Northfield for forty years and was a man held in the highest esteem; his always pleasant and kindly manner made him a friend to everyone. It may well be said of him that his whole life was one of service not only to his family but to the community in which he lived. He was the happiest when able to do something for those around him. In the passing of Mr. Gokey, Northfield has lost not only a good friend but a loyal citizen and the community joins in extending sympathy to the family.

The deceased was a member, adjutant and commander of Johnson post G.A.R., until its disbandment and at the time of his death was a member of Brooks post G.A.R. of Montpelier. He was a member of DeWitt Clinton lodge F. & A. M. of Northfield and Royal Arch chapter of Masons of Randolph; a member of the Universalist church for many years and a regular attendant as long as health permitted and was very much interested in the church and its welfare up to the last.

Funeral services will be held Tuesday afternoon from the Universalist church at 2 o'clock. Rev. H. G. Mann, pastor of the church, and Rev C. C. Creegan, pastor of the Congregational church, will officiate. The members of DeWitt Clinton lodge and the members of the Sons of Veterans will attend the services in a body and the Masonic burial service will be conducted at the grave. Burial will be in Elmwood cemetery.