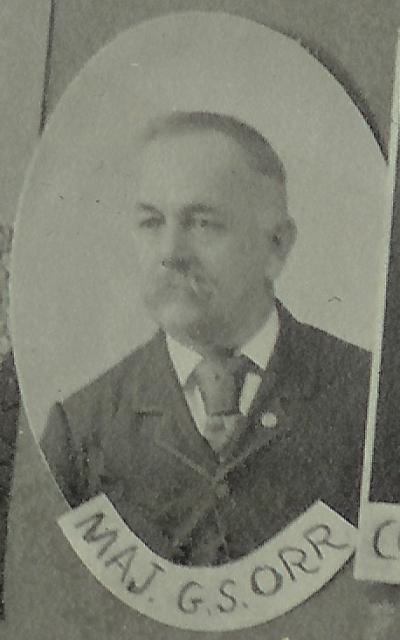 ORR, MAJ. GEORGE S., m. Henrietta dau. Of Ervin Pratt; entered as private in the first Vt. Reg, was at the Battle of Great Bethel. Soon after his discharge he re-enlisted as private in the 77th N.Y. regiment; rose step by step to the rank of Major; was in the disastrous campaign of Gen. McClellan; engaged with the enemy at Yorktown from April 6th to May 4, 1862; at Williamsburg May5, at Chickahominy from May 20 to 26, at Hanover C.H. May 27, Fair Oaks June1, Golden Farms June 20, Savage Station June 27, White Oak Swamp June 28, Charles City cross roads June 30, Malvern Hill July 1, ; the second Bull Run; at Fredericksburg Dec. 13 and may 3, '63, ; and at Franklin's Crossing June 5; at Gettysburg July 2 and 3; at Fairfield July 5; Rappahannock Station Nov.7, and at Mine Run Nov.24; In '64 under General Grant, in the terrible Battle of the Wilderness May 5 and 6, at Spotsylvania May 8 and 10, , at Anderson House May 20, at Cold Harbor June 1 to 13, t Petersburg June 16 to July 10, at Fort Stevens July 12, at Winchester Sept.15, at Fisher's Hill Sept 22, and at Cedar Creek Oct.19. Here Major Orr being on the staff of General Bidwell had his left arm shattered by the explosion of a shell which instantly killed General Bidwell. This was the first wound he had received in all the battles we have here enumerated which ended his campaigns. The brigade continued in the field and was in most of the hard fought battles around Richmond until it was taken April 3, 1865.

We have been more particular in giving in brief detail the military career of Maj. Orr, inasmuch as he was in the same division with the "Old Vermont Brigade" composed of the 2d, 3d, 4th, 5th 6th, and part of the 11th regiments of Vermont volunteers. Hence, his record is their record!. This brigade, in which there were 43 representatives from this town though the army with which it was connected met with many and terrible reverrses, never dodged the post of danger, and never flinched in the face of the enemy, only retreating when ordered by the commanding General. Their banners never trailed in the dust, nor were captured by the enemy. They were the balance wheel of the army of the Potomac, and nobly they fulfilled their mission.

ORR. CAPT. MOSES E., enlisted with his brother, George S., in the first Vt., and next in the 96th N.Y. He served longer than any other man from this town, and though engaged in but comparatively few battles was ever prompt to fill the position assigned him. He was never wounded in the service.

Poultney, May 29. - George S. Orr, aged 69 years, a veteran of the civil war, and an old resident of this town, died suddenly about 9 o'clock this morning of apoplexy. Mr. Orr had gone to the barn to attend to the morning work and was standing in the barn door when he was stricken down. He fell into the hen yard, and was dead before his wife, who saw him fall, could reach him.

Mr. Orr, who lost an arm during the civil war, was a member of Joyce post, Grand Army of the Republic, of this place. He was to speak in one of the local schools today in connection with the Memorial day exercises.

Besides his wife he leaves two sons, Edwin R., of this town and Harry R. Orr of New York city.

The funeral of George S. Orr, who died Tuesday morning was held at his late home yesterday morning at 11 o’clock, Revs. D. H. Corkran and I. E. Usher officiating. A quartet, consisting of William Griffith, Jennie Hans, Mary Jones and Ralph Corkran furnished music. The bearers were six members of the Grand Army of the Republic. A number of friends and relatives from out of town attended.