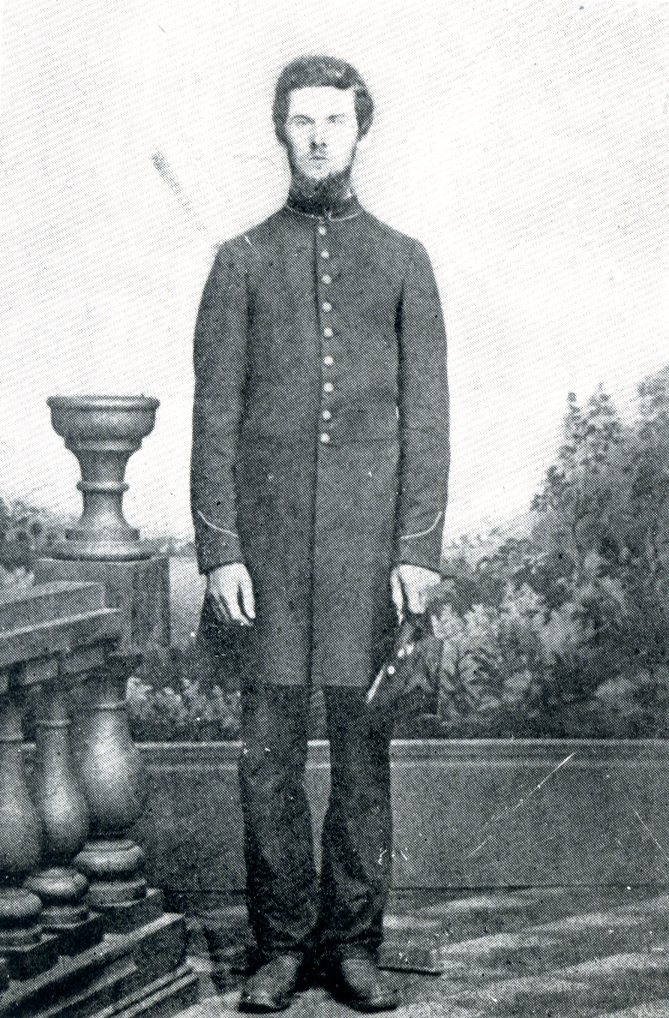 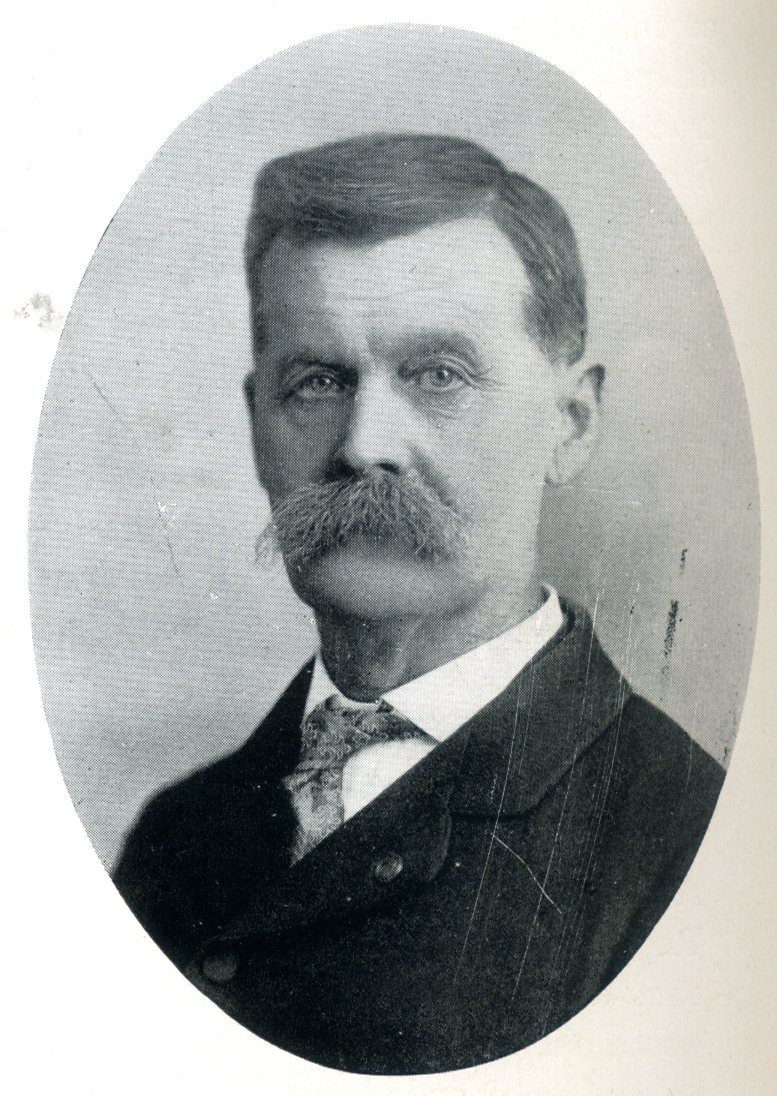 In the death of Ward G. Piper we lament one of the noblest of the noble band of men in Company G. After a brief illness from .gastric ulcer he died October 19th, 1905, in his home at West Rutland. For details of his life 1 refer to his personal sketch. Something should be added, for his modesty prevented him from saying much we would like to know. I knew him well as a boy in Bakersfield. His father, an able and godly man, was my pastor during my childhood. Ward was a playful, mischievous boy, but guileless as country boys ought to be. At the beginning of the war he was but a lad of 18, but during that first year of conflict boys developed into men very rapidly. At 19 he was zealous to serve his country and enlisted into the ranks as a soldier. He was faithful, dutiful, brave and loyal - a Christian soldier. As a comrade he was kind and generous, ready to lend a hand, full of sympathy and help for the sick, a good talker and the best of company. He added much to the social life of the company. At Gettysburg he acquitted himself nobly. After his honorable discharge we separated and did not meet again for thirty years. At the grand encampment in Boston we met. Thanks to the thoughtful generosity of our self-appointed committee of arrangements, we had long talks together during our excursion to Nantucket and the home of Comrade Clark. I noted quickly his manly bearing, his growth of character, his worthy life - and his reasons for pride in his devoted wife and worthy and able children. He had no political ambitions, he did not aspire to be rich; he was content to live his life out worthily, to do his work faithfully, be all in all to his family, and to do society what good he could.

Since his death I have received letters from his widow and personal friends In. West Rutland. From them I learn that Ward united with the Congregational church at 17 years of age. In 1875 he joined by letter the same church in West Rutland of which he remained a loyal and constant member until his death. He held several offices in the church and made a special point in welcoming and caring for strangers. He was a member of the Free Masons and of the Grand Army, in both of which he had held important offices. At his funeral the Grand Army post had charge of the services at the house and the Free Masons at the grave. He was highly prized by his employers for efficiency and faithfulness. He was public spirited to a marked degree. His love of flowers was a marked characteristic, and they responded to his skilful and loving care. He was generous in using them as mementoes of sympathy and affection. His last sickness was a noble witness to the reality of his faith. His widow writes me, "Ward was only sick a week. At times we talked together. He made arrangements for his funeral and planned everything out for me in the way of our affairs and when the end came, told me he was so happy and all was well with him. He was a good father, a loyal husband and a faithful Christian. Home was all in all to him." Again this sorrow stricken woman is bereaved. Five months to a day after the death of her husband her eldest born, William H. Piper, followed his father to the land of the blessed. He was an architect, a young man of great promise. She has remaining, to cheer her in her age, one daughter, Sara, a teacher of marked ability. and Charles, a worthy son residing In West Rutland. May the peace that passeth understanding abide with her in her shadowed home.

I was born at Weathersfield. Windsor county, Vt., December 18th, 182, was oldest son of Rev. Caleb W. and Sarah M. (Tucker) Piper. My grandfather, Waldo Tucker, served as ensign in the War of 1812-14. My uncle. Major Simeon W. Tucker, served in the Mexican War. I moved with my parents to Bakersfield, Vt., when eleven years old, was educated at the schools there and at Underhill Academy, enlisted at Underhill August 19th, 1862, and joined Company G at Bakersfield September 10th as private. February 5th, 1863, was detailed as flfer in place of Homer Fletcher, deceased, and served in that capacity the remainder of my term of service; participated with the regiment in the skirmish at Fairfax Court House with Stuart's Cavalry and with the regiment in all its various marches and countermarches, including the battle of Gettysburg, and was mustered out at Brattleboro at expiration of my term of service. The first death in Company G was that of Homer Fletcher. I remember well the morning when Company G fell in, without arms, and escorted by the drum corps with muffled drums, marched to the hospital tent where religious services were held. Our hearts were very sad for Comrade Fletcher was loved by all and we also felt some of those left might have a similar fate. For me it was particularly sad from the fact that of my own tentmates Fletcher was dead and the others, .John B. Fassett and Henry Stevens, were sick in the hospital. I collected all the little keepsakes and other articles belonging to Fletcher to send to his dear ones at home and went to Washington with Captain White to arrange to send his remains to Vermont. A few weeks later when the regiment left Camp Vermont I remained behind with Captain White, who was sick in the hospital, and who died a few days later. In justice to Captain White let me say that, while he might not have been all that was to be desired as a company commander, he impressed me as a man who had a very kind heart.

Of the many little incidents of our regimental experiences I would like to mention one that occurred at Wolf Run Shoals. One beautiful morning we were alarmed by the beating of the long roll. After we had fallen into line Colonel Randall rode over in the direction of the 14th Vermont Regiment to learn the cause of the alarm.

After a short time he came back saying that it was caused by a _____ _____fool belonging to the 14th who was born just outside of the State of Vermont.

The first gun of the battle was fired before we got there. I have been most of the time engaged in mechanical pursuits. Was married June 18th, 1874, to Cornelia L. Howe. Had three children; Sara E., a teacher in the graded school at West Rutland; William H., an architect in San Francisco; and Charles A., residing in West Rutland. Am a pensioner at the rate of $8.00 per month. My physical health is fairly good with the exception of a slight lameness caused by a dislocation of my left knee in February, 1903. In fact, I have had much to be thankful for in my life of 62 years and sincerely wish that all my comrades of the 13th Vermont may be equally favored. See page 308 for pictures.

Ward G. Piper of West Rutland, died suddenly at 2 o'clock yesterday morning of gastric ulcer of the stomach. Mr. Piper was 62 years old, and was a veteran of the civil war, having enlisted on September 20, 1862. He was 19 years old when he enlisted, and he served until the close of the war with Company G, 13th Vermont infantry. He was an ardent Grand Army man, and was an enthusiastic attendant of the meetings of Roberts post, No. 14, of which he was a member. He was also a member of Hiram lodge, F. and A.M., No. 101, of West Rutland. Mr. Piper had enjoyed good health until about a week ago. He is survived by a widow and two sons, William and Charles of West Rutland, and one daughter, Miss Sarah Piper of Ralston, Mass. The funeral will be held Sunday afternoon at 2 o'clock. Roberts post will have charge of the service at the house and Hiram lodge of Masons will conduct the service at the grave. Burial will be in Evergreen cemetery.