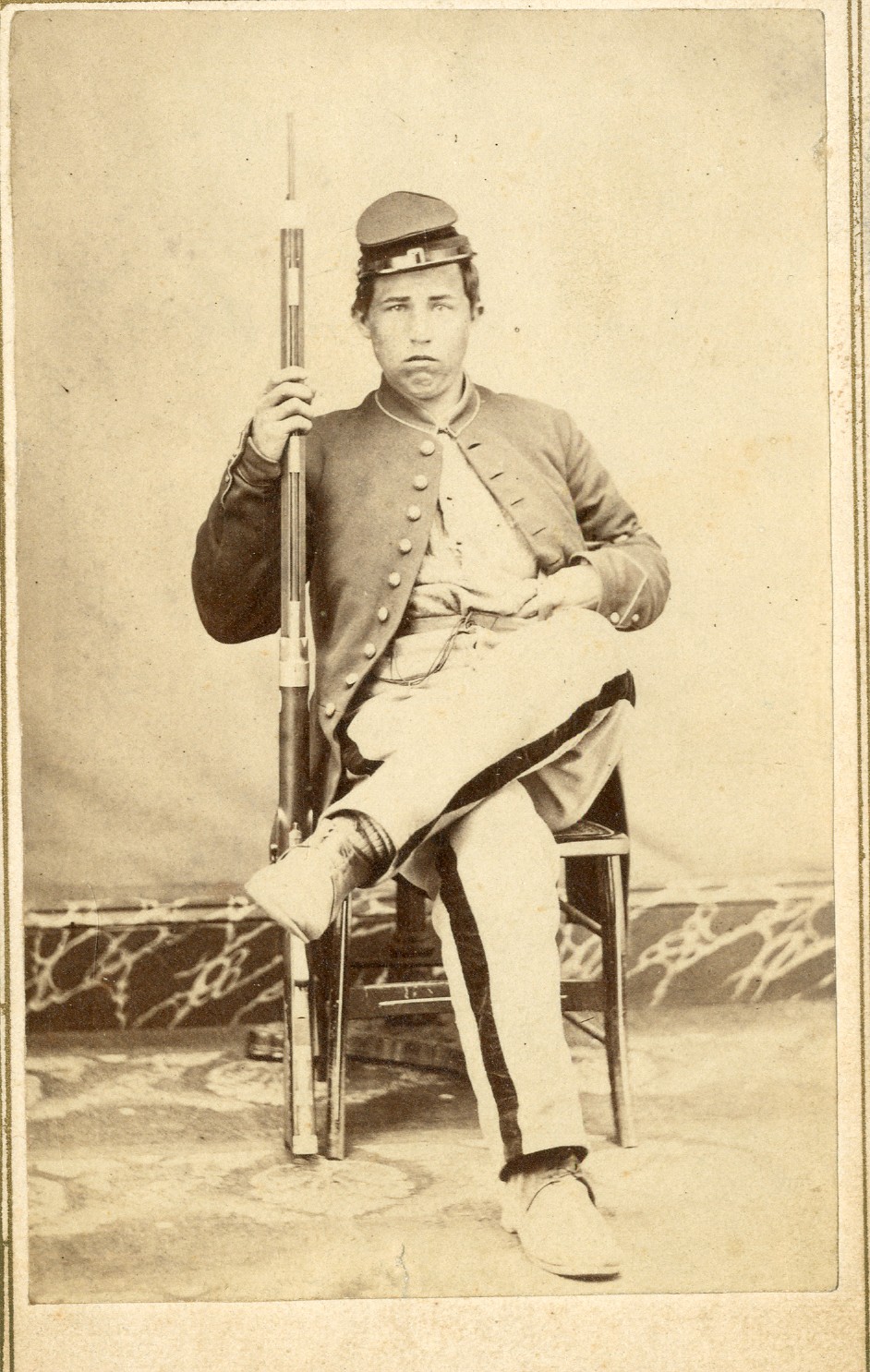 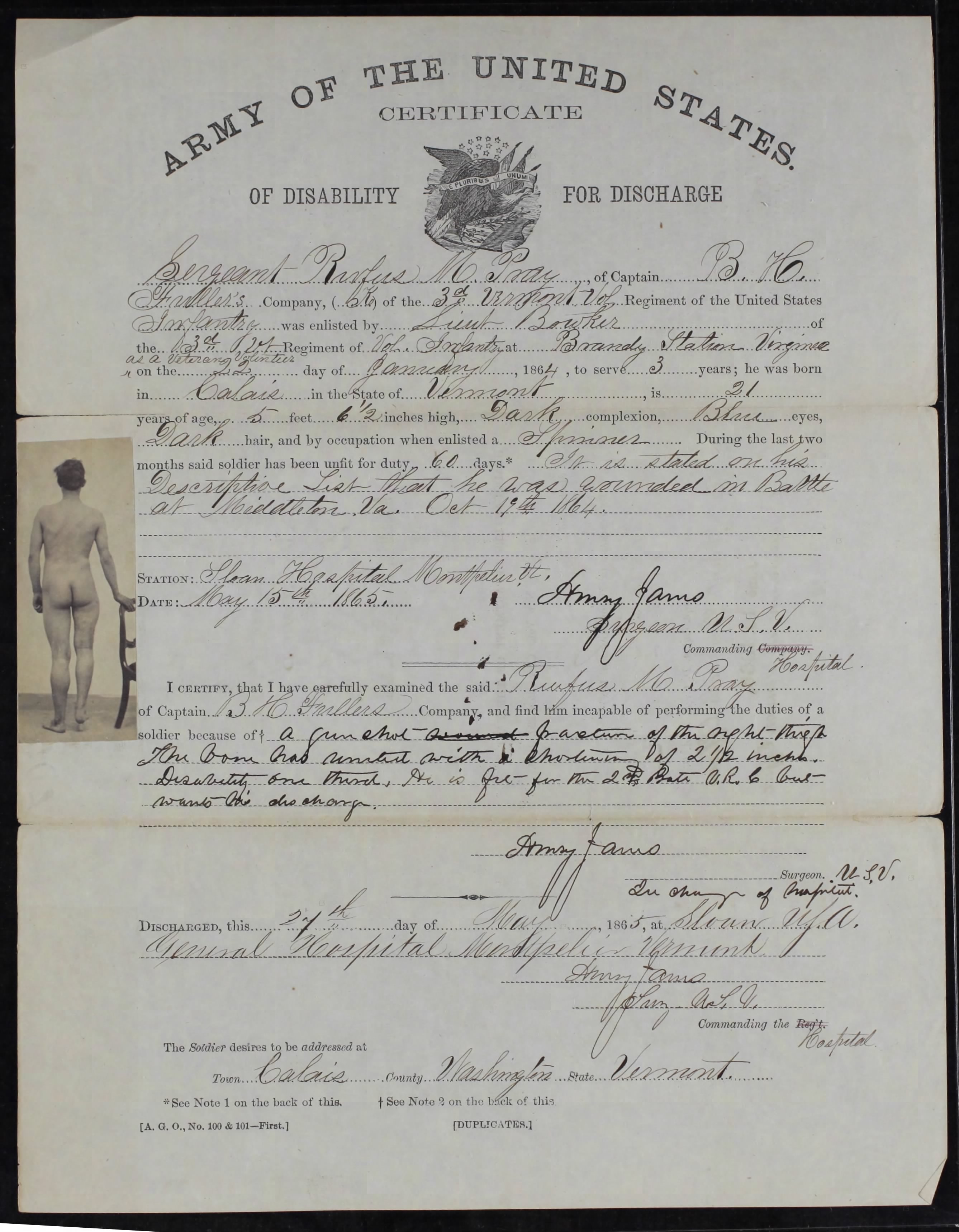 
See other discharges signed by Dr. Henry Janes at Montpelier with photographs.

His father's calling was that of a carpenter and joiner, who was a long time resident of the town, in the schools of which Rufus received his education. The latter, a mere lad of seventeen, did not resist the patriotic impulse that moved him to enter the ranks of the Union army, and enlisted in the 2d N. H. Regiment, which for three months garrisoned at old Fort Constitution on the seacoast of that state. On his journey homewards, he stopped at St. Johnsbury, where Co. K, of Calais, 3d Regt. Vt. Vols. were engaged in their daily drill, and such was the enthusiasm of the young volunteer, that he at once re-enlisted without even bidding farewell to the loved ones at home or crossing the paternal threshold. Mr. Pray shared the fortunes of the gallant third in all its numerous engagements from Lewinsville and Lee's Mills, to the bloody battles of the Wilderness, where he was wounded in foot and forehead, and was sent to the S. A. Douglas hospital at Washington, from thence transferred to the U. S. General Hospital at Montpelier, from which he boldly returned to active duty before his wounds were wholly healed. He then experienced the vicissitudes of Sheridan's Shenandoah campaign, and at Cedar Creek, while on the skirmish line, received a dangerous wound in his hip, which was traversed by a minie-ball. He was carried twelve miles in an army wagon to Sheridan Hospital, then sent to Frederick, Md., and later to Montpelier, where he received an honorable discharge after a gallant service of four years, one month and twenty-six days, during which time he was not excused from duty a single hour, except when wounded.

Since his return from the army, though for more than a year a cripple, he has been able to labor a little at his trade of carpenter and joiner, and to cultivate with effort a small farm.

Mr. Pray was married August 8, 1864, to Nellie A., daughter of David and Sabrina (Chase) Whitham of Woodbury. One child has been the fruit of this wedlock: Lillian M. (Mrs. Robert B. Tassie of Montpelier).

Mr. Pray is still a member of that party for whose political principles he fought and bled. He was appointed postmaster at South Woodbury, July 12, 1889, under President Harrison, and held that position till his resignation on being elected to the Legislature of 1892 by an unusual majority. He was town treasurer in 1891-'92. 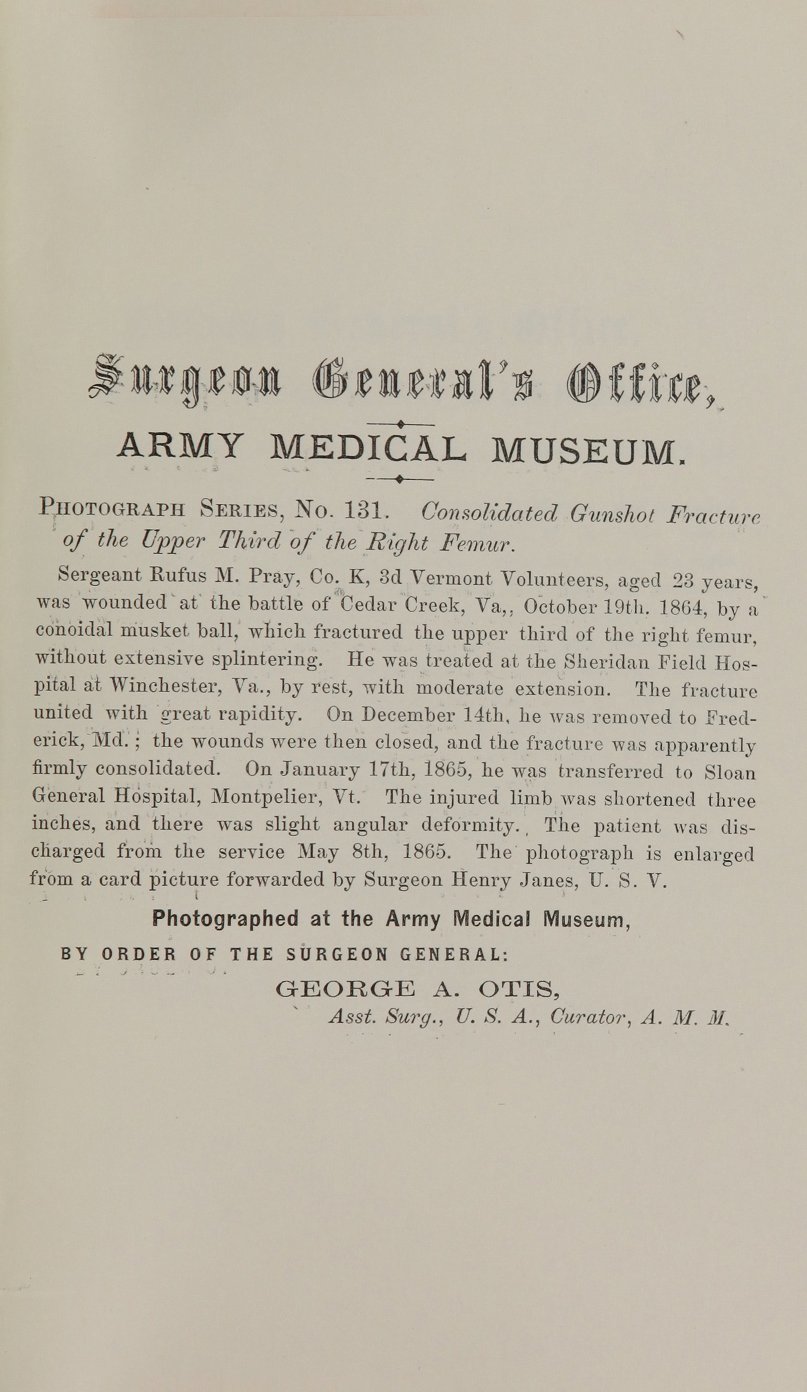 Rufus M. Pray died Sunday afternoon at the home of his daughter, Mrs. R. D. Tassie. He was 74 year4s of age and was born in Calais, although the greater part of his life was spend in Woodbury. He leaves, besides his daughter, three grandchildren and several sisters. He was a member of the G. A. R. and of Green Mountain lodge, No. 68, F. and A. M. The funeral will be held at the home of Mrs. Tassie Wednesday afternoon at 2 o'clock, Mrs. Ewen of Barre officiating.