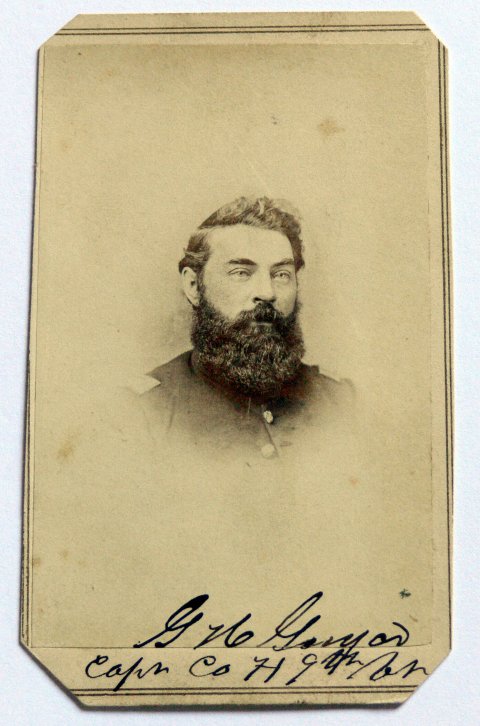 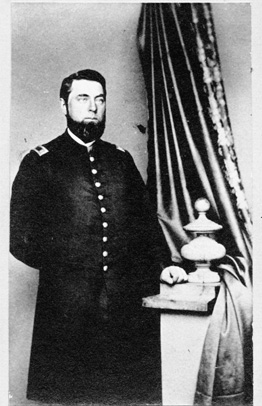 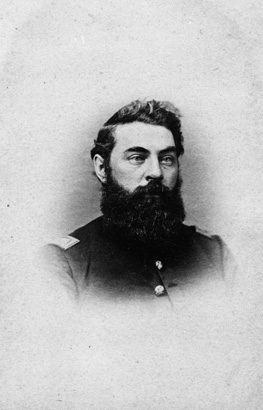 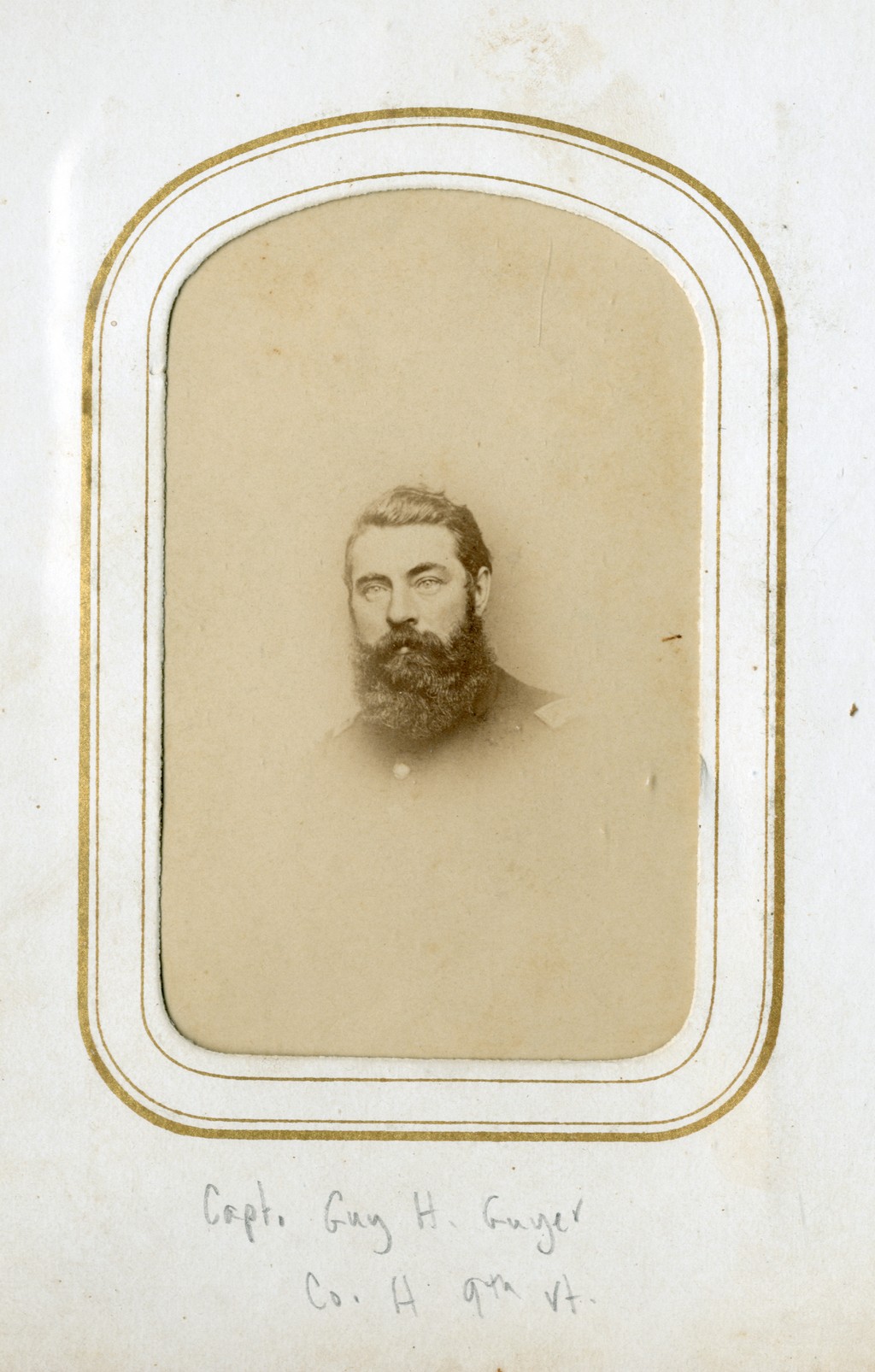 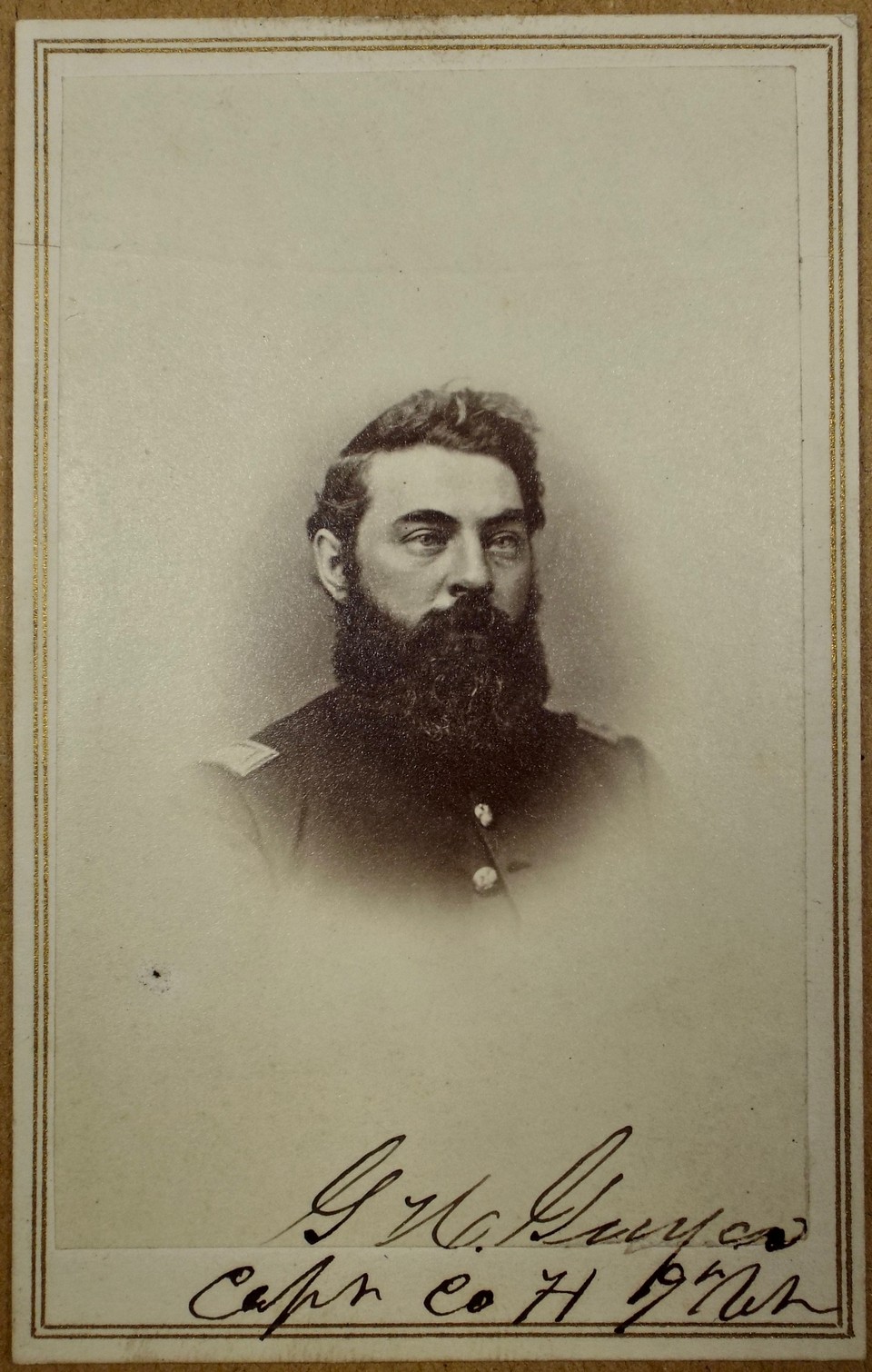 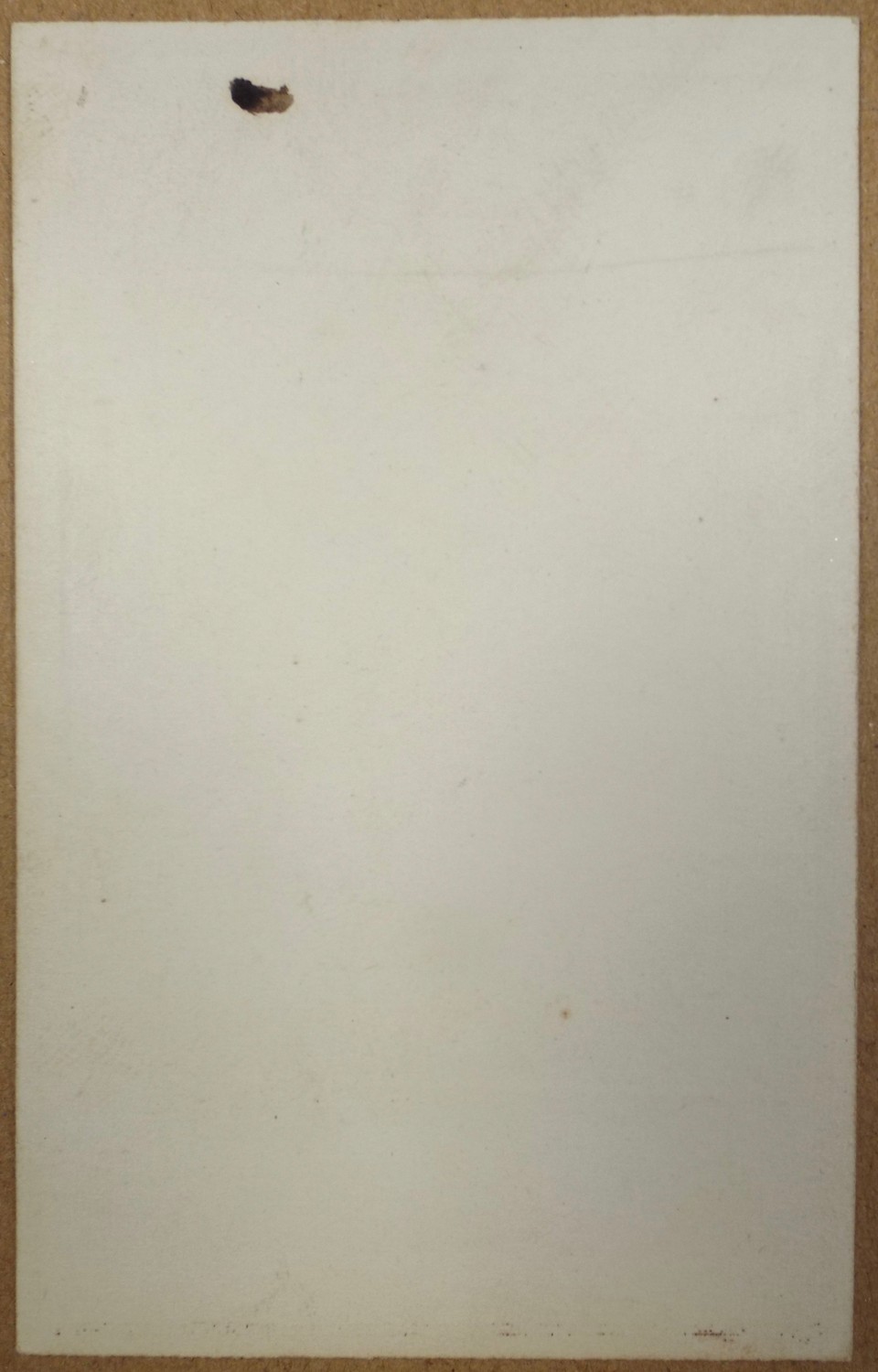 LAMOILLE NEWSDEALER: JULY 6, 1864
OBITUARY
The life of another brave volunteer has suddenly and heroically gushed forth in blood, in the very front of red battle's sternest array; another offering, far too precious and costly to be given to almost any other cause, has been cheerfully laid at the feet of the Republic.
On the morning of the seventeenth of June, First Lieutenant G. H. Guyer, commanding Co. C, 17th Vt. Regt., was shot thro' the left breast and instantly killed, at the head of his company in a charge on a rebel battery in front of Petersburgh. He was buried by his companion- in-arns, in the shade of a walnut tree in a gentleman's garden.
Shot, at the head of his company, in a charge upon the enemy's battery,, and buried by his war-worn comrades beneath a walnut tree in the garden of a Virginia gentleman! A glorious death! A sublime burial!


We'll not disturb them now!"

One week from the next Sabbath, the sad intelligence reached his home in Vermont. True, he died gallantly fighting for our common country, and his life went out in a blaze of glory, yet he was a tender husband and an affectionate son, and the blow to his relatives was terrible to bear. True, thousands in our afflicted land had borne the same, but this was their cup of sorrow, and it could not pass them by. The event, sad indeed to us at home, but of daily occurrence in the terrible ordeal through which we are passing, seemed to cast a gloom over the entire community.
We thought of him as ever obliging and kind, a ready and willing help in sickness and sorrow, and cheerful and pleasing companion in health and prosperity; we thought of him as ever liberal in all public enterprises, and generous to the poor and needy; we thought of his constant gifts to ministers of the Gospel, regardless of party or sect, of the genuine kindness and frankness that made him an ever welcome companion, and of the earnest devotion to his country that led him to enlist as a veteran, after having once been and felt the perils of army life.
And as we thus thought of him and his character, and recollected how recently he moved among us, inducing others to follow him to the field, and how cheerfully he left our peaceful Green Mountain home, the weight of our sorrow grew heavier and heavier, old and young alike turned aside to drop the unbidden tear.
In his last letter to his friends, he seemed to be impressed with the premonition that he should never return, yet he had no desire to turn back--- "Our hardships are great, but it is all right, and I am thankful I am permitted to bear a part in this great struggle." "I am willing to fight so long as there remains a rebel to be fought" 'I would like to see you all, but rather see the inside of Richmond than anybody" "I shall do my duty."
The tender regard of his friends at home, accompanied by a full determination not to leave his post until the campaign should end, coming from one who had just passed through the awful battles of the Wilderness and Spotsylvania, and had seen his men fall in scores about him, at the same time feeling that he held his own life by slender tenure, indicating the character of a brave and intelligent citizen soldier, and so long as the Union is defended by such men, nothing but the ignorances or imbecility of our leaders can defeat our arms.
He was so highly esteemed and beloved by his men whom he had so often led, not sent, to battle, that his burial beneath the walnut tree, must have been a sad, solemn and most impressive scene, over which the sternest warrior could not refrain from tears.
Col. Cummings, in his official report, tells us, that to "the 17th" was entrusted the dangerous and important duty of capturing the battery, and how gallantly it was done, is known to all; but Lieut. Guyer was not permitted to enjoy the victory. In the same report, we are assured that "he was one of the most faithful and gallant officers in the whole regiment." Thus has he fallen, in the prime of manhood, beloved by a wide circle of friends at home, idolized by his companions in arms, and honored and esteemed by his commanding officer.
While we deeply mourn his loss, and tender our trust and kindest sympathies to his bereaved friends, we trust, that, as we closed his eyes to the early sun of the 17th of June, his kind and gentle spirit took its flight to the shining shores of light, where the shock of battle is never felt.
The soil of the "Old Dominion" is dearer to us than ever before, for there, in the shade, they laid him to rest.

"But the night dew that falls, though in silence it weeps,
Shall brighten with verdure the grave where he sleeps.
And the tear that we shed though in secret it rolls,
Shall long keep his memory green in our souls."
COM.