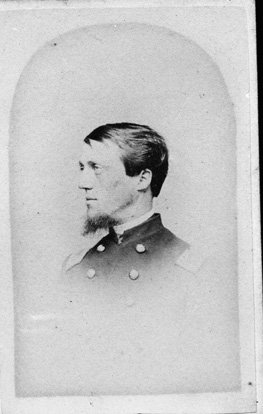 Oscar Adrian Hale was born in Troy (Orleans County) Vermont, 21 July, 1837, son of Raymond & Sarah F. (Currier) Hale. When the 1850 census was taken, Raymond Hale was the owner of the hotel in Troy. His 1st wife Sarah, Oscar's mother, died before 1843. Ray's second wife, Dorothy (Ware) "Dolly" Grant was living with him in 1850 with her three children, Mariah, William Cutting, and George Grant. At this time, Oscar was 12 years old and attending district school.

Oscar was proud of his New England heritage. His grandfather was Nathan Hale Jr. who was a native of Rindge, NH, son of Colonel Nathan Hale of Revolutionary War fame. Nathan Jr. lived in Rindge until about 1797, when he removed to Windsor, Vermont. He was early engaged in the local Windsor militia and was elected its captain. His brother Harry afterward succeeded him in the rank. The neighbors knew them as "Captain Nathan" and "Captain Harry". Captain Nathan engaged in business as a merchant at the "Street" so-called - the Main Street of Windsor, Vt. About the year 1800, he was joined in business by his brother, Harry who became his partner. The business firm's name was N. & H. Hale. They opened a second store in West Windsor after a year or two, which Harry took charge. Nathan remained on Main Street in Windsor, but the partnership covered both stores. Nathan Hale was a man always of most decided political opinions. He was an early Federalist and afterwards a Whig. He was an active Mason. He never sought prominence in public affairs, his deafness disqualifying him. He was a man of sound judgment, of the finest an1837-1868d most scrupulous integrity, and greatly respected in all the communities in which he lived. Nathan removed to Chelsea, Vt. in 1806/ His brother Harry followed him in 1807, and they renewed their association as merchants and millers under their own firm name of N/ & H. Hale. This firm was dissolved by mutual decision when Nathan retired. Nathan had learned the trade of clock making, and after going out of partnership with his brother, pursued that trade for the remainder of his life. He also kept an inn in Chelsea, Vt. for many years in which his son Raymond assumed control and ownership. Nathan Hale Jr. suffered for much of his life from deafness which became very marked in middle-age. This disqualified him from active business.

Oscar was twelve years old when his grandfather died in Chelsea in 1849. He inherited a goodly sum of money from the estate. Oscar used some of it to pursue higher education. He entered Thetford Hill Academy with a letter of recommendation from Hon. William B. Hebard of Chelsea, Vermont. He excelled and went on and graduated from Dartmouth College in 1860 where he was a member of the Psi Upsilon Fraternity.

Subsequent to Dartmouth, Oscar went south and taught school at Ellicott's Mills, Maryland, a prosperous farming and manufacturing town with gristmills, ironworks, and cloth factories. When the Civil War began in 1861, Ellicott's Mills had a population of 2,000 people -many of them in support of the Union cause. Oscar remained in Ellicott's Mills until April, 1861 when he took a position in the Post Office Department at Washington DC in May of the same year. In September, 1861, determined to do his part for the Union, Oscar moved back to Vermont. He recruited a company of men and was chosen their Captain. It was Company "D" of the 6th Vermont Regiment. Oscar was promoted Major on 12 Jan., 1863. On 18 March, 1863, Oscar was appointed Lieutenant Colonel of the Regiment. He went through all the battles from Yorktown to the Virginia Valley in 1864, unharmed, but his luck ran out. He was wounded by a bullet in the right thigh at the Battle of Charles Town, 21 Aug., 1864. He mustered out with his company, 28 Oct., 1864.

Oscar left America in December of 1864 with the goal of permanently settling in Rosario, Buenos Ayers, South America. He engaged himself in the raising of sheep, hoping to regain his health. This was not to be. Oscar died in South America from pulmonary afflictions, 13 Jan., 1868 (age 31). He was buried in South America.