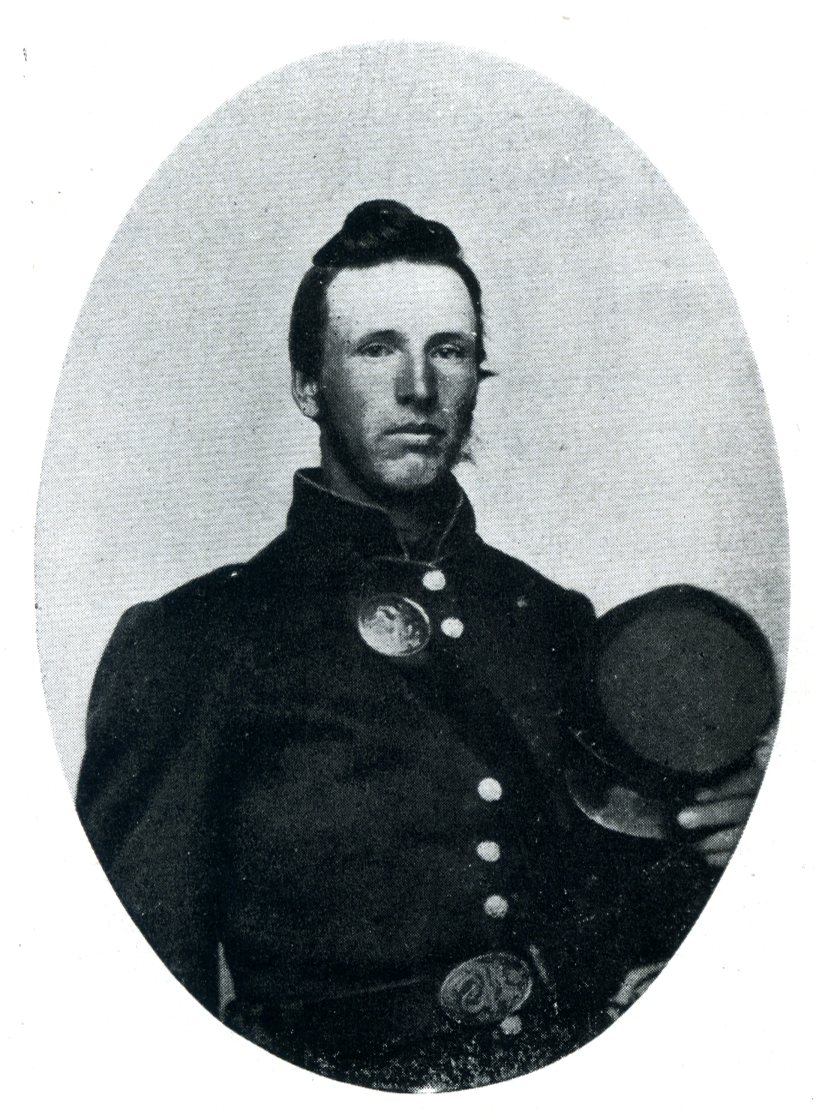 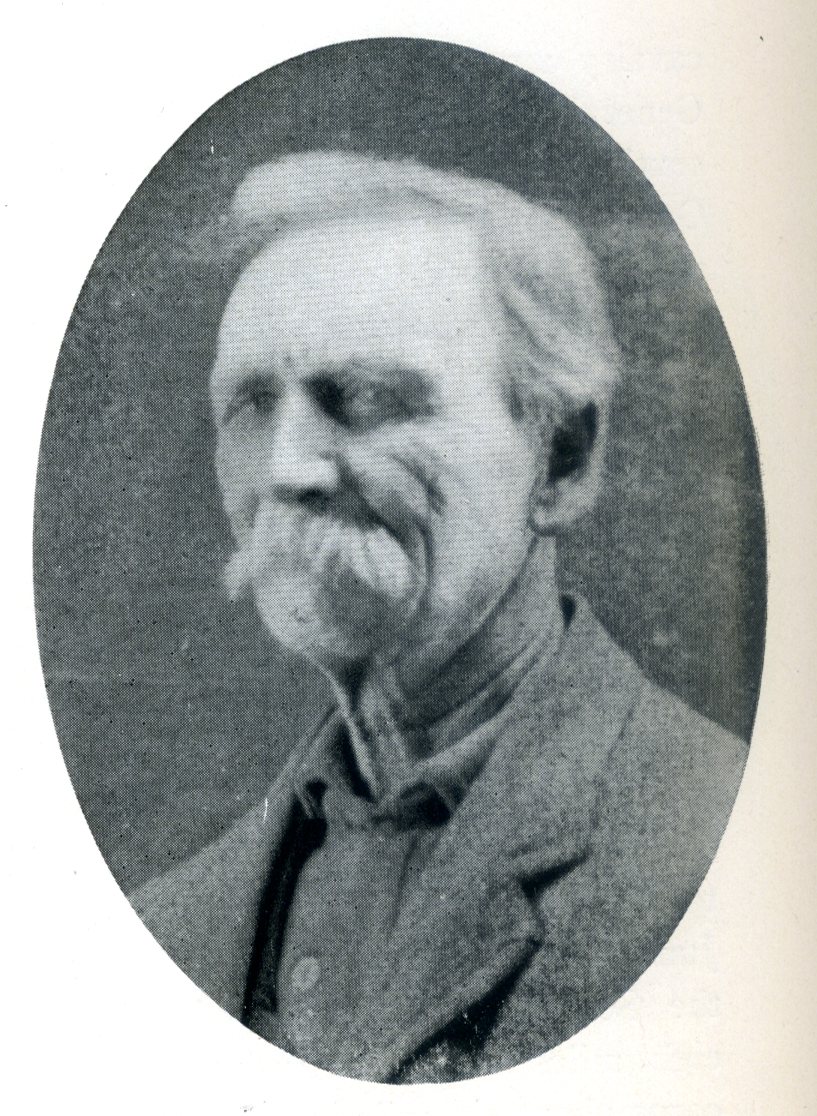 I was born in the town of Vershire, Vermont on the 12th day of March, 1842. My father's name was John, and grandfather was one of the first settlers. Was brought up on a farm but did not like the business - required too much hard work to get a poor living. As a small boy attended school summer and winter and could read and write and cipher as far as the rule of three. As I grew up I rather go to school than work on the farm. My father said, "Work in the summer and go to school in the winter," so I did. I enlisted August 24, 1862, in Worcester, Vermont, at the age of 20 years and 5 months, and joined Company C. We elected Lewis L. Coburn captain and he was a good one. We commenced drilling after the company was organized and was at it most every day till we started for Brattleboro, Vermont, to be mustered into the United States army. We reached Brattleboro on the last day of September and was mustered in on the 10th of October and started for Washington on the 11th. I was a high private in the rear rank and carried a knapsack and gun. We camped down on East Capitol Hill, Washington, D. C, a few days and were organized into a brigade called the Second Vermont Brigade, composed of the 12th, 13th, 14th, 15th and 16th regiments. We had a few brigade drills and a grand review and then on the last day of October crossed the Potomac on Long Bridge into old Virginia to do duty on the front picket line. We passed a place on a hill called Arlington Heights and some of the boys who were up in history said it was General Lee's old home. It was a fine looking mansion and in plain sight of Washington. We marched this first day some ten miles and stopped for the night and named the place Camp Seward. Remained here a day or two and then turned to the left and marched through Alexandria just at night and little beyond camped down for the night on the low banks of a little creek. The day was hot and the roads dusty and our guns and knapsacks grew heavy long before night and we all were tired and hungry and glad of a chance to stop and rest for the night. The most important event of life happened just after I enlisted, namely: I was married September 13, just two weeks and one day after I enlisted. And on this occasion I enrolled for life, and promised to love and protect as long as I lived. The result of this happy marriage was five children, 3 boys and two girls. I made no mistake when I volunteered to defend my country nor when I enlisted for life in the holy bonds of matrimony.

In the spring of 1863, while in that lovely camp on the banks of the Occoquan there was every indication of a battle between General Hooker and General Lee and rumor said that we should have orders to join General Hooker's Army of the Potomac now on the north bank of the Rappahannock on his way to capture Richmond. Many doubted this because our time of service was near the end and besides we had had no experience in fighting and General Hooker would not accept any raw troops when about to lock horns with General Lee. We then thought General Hooker was the best man and we had the largest and best equipped army and many of our boys were anxious to go, and it was only some 30 miles to Fredericksburg and we could make the march in a single day if necessary. I wanted to have one genuine fight before I returned home. Was not satisfied with the fight we had at Fairfax Court House when General J. E. B. Stuart attempted to capture us on that December night when Colonel Randall was down at Alexandria. We heard the cannonading at Fredericksburg and Chancellorsville when General Hooker started for Richmond but no orders came for us to go. We heard in a day or two that General Hooker and his mighty army had been badly whipped by General Lee and our army was obliged to retreat back to the north bank of the Rappahannock. In a few days the whole Potomac army was on the way north to overtake General Lee and his army, who had gone down the valley of the Shenandoah into Maryland on their way to capture Washington, Then we were sure that a great battle was at hand and our brigade would likely have part and share in it, and so we did. General Stannard was now our brigadier General and we were willing to fight wherever he might lead. It turned out that the boys of Company C that reached Gettysburg had a good chance to fight to their full satisfaction. I know I did. The long march day after day in the rain and through mud and water was pretty hard for me and had it not been for Captain Coburn giving me a ride on his horse now and then could never have reached the battlefield of Gettys- burg, I had been sick in camp with the mumps and was in bad shape when I started. My old army shoes got filled with mud and gravel and my feet were sore and blistered long before we reached Edward's Ferry, where we crossed on a pontoon bridge Into Mary- land. The captain let his boys ride his horse and he went afoot, and in this way quite a number of us reached Gettysburg that otherwise would have been left behind. The fighting was terrible and I was a little scared at first. It was new business and the cannon balls came all about us bursting in the air and the pieces flying in all directions. Samuel Pratt who was close to me was hit in the leg. I thought it was a hot place and mighty dangerous. I soon became a little used to the noise and exploding shells, so when down in Plum Run Valley using guns and bayonets and capturing General Pickett's brave boys I forgot all about the danger - must have been excited. The boys we captured seemed very willing to be taken out of that slaughter pen to the rear. Company C carried the flags and was near them and the two big boys that carried them never flinched or wavered on that charge. Old Glory was to the front fluttering in the breeze and never was in the hands of braver boys than on this occasion. It was a glorious fight and I am glad I was in it. See page 212 for pictures.

Calvin W. Richardson, an 88 year old veteran of the Civil war, who lived for many years in Worcester, died on Wednesday night at the home of a niece, Mrs. Ida Clark, at 417 Elm street, this city, where he had been for about a year, being in gradually failing health during that time. He was born in Vershire March 12, 1842, the son of John and Alida (Smith) Richardson, and served in Co. C of the 13th Vermont regiment in the Civil war, taking part in the battle of Gettysburg and other important contests. He is one of the few surviving members of Brooks post, G. A. R., of this city. His wife died several years ago. He is survived by one son, Charles Richardson of Marshfield, a brother Joel Richardson of Worcester a step-son, Milo Chandler of Oregon, several grandchildren and several nephews and nieces. The funeral will be held at the church in Worcester at 2 o’clock Sunday afternoon.