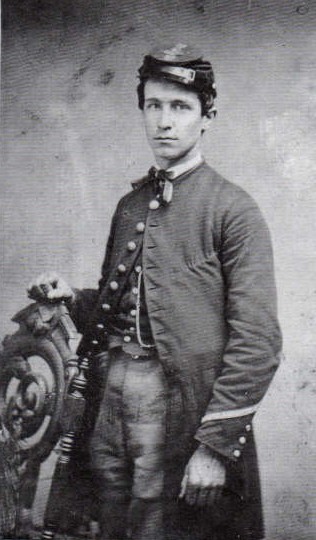 I have the honor to inform you that I (a private of Co E. 5th Regiment Vermont volunteers) was separated from my Regiment near Alexandria, VA on the 29th day of August 1862 on account of sickness and was ordered by Capt Charles Dudley Commanding Co E. 5th Vt. Vols, to Report in Person to our Regimental Surgeon. On arriving at the Surgeon Tent I found him with everything packed up and ready to leave as the Regiment(s) were then under marching orders, but I was told by him to stay there until further provisions were made for us. About 4 o=clock P.M. that day there was a surgeon came with a train of Ambulances and ordered all of us that were sick to get into the Ambulances and were taken to Alexandria and were placed on board the boat where we remained until the next morning when we were taken to Washington and from there to the U.S. Army Generals Hospital at Annapolis Md. On arriving at Annapolis we was admitted into Ward 3 Section 5, and for a part of the time was under the treatment of Doctor Miles.

Original copy of above letter (warning, its fairly large) 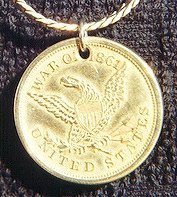 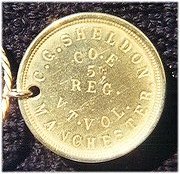 "Sorry, but the government did not issue dog tags during the Civil War!" Rose Sheldon Newton was told by antique dealers when she tried to get an assessment of her great-grandfather's gold-colored disk. After logging many miles and many hours searching, she finally found a dealer near Atlanta, Georgia who recognized it, an article by Wendall Lang, Jr., in "North-South Trader's Civil War Magazine," Volume XV, No. 6, Sept-Oct 1988 describing the disk of another Vermonter, (J. F. Cook, Co. I, 3rd Vermont, Saxony, Germany), and a pretty detailed history of her great-grandfather's military career in his service and pension records from the National Archives. All from a little gold-colored disk that didn't exist!