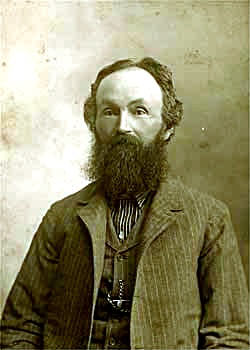 He is buried in St. Johns cemetery, Northfield.

Louis Shontell passed away at 11:30 on Saturday at the home of his daughter, Mrs. George Clement, where he has been since last January. He was then taken to the home of William Shontell on Randall Street, where his body remained until the hour of the funeral.

The deceased was the son of Mr. and Mrs. Augustus Shontell and he was born October 10, 1845, in Middlesex. He attended the public schools and when he was 20 years of age he enlisted in the army when he and six brothers, he being the youngest, became members of the Union Army. Mr. Shontell was a member of Co. G, 6th regiment of Vermont, and was honorably discharged after three years of service. He was by trade a blacksmith, and was one of the employees that did work for the Hoosic tunnel many years ago.

Mr. Shontell was a much respected citizen and he was known by all children in his vicinity. He was especially fond of little children and when he called on any of his grandchildren and also great-grandchildren for the first time he always brought to them a bank book with a deposit. He has made his home with his daughter, Mrs. John Jackman of Stowe, since the death of Mrs. Shontell about forty-two years ago, and as his health failed and he was unable to be about, he came here to be with Mrs. Clement.

Besides these two daughters, he is survived by three other daughters, Mrs. Lillian Smith of Barre, Mrs. Lydia Machia of Orange and Mrs. Peter Berno of Montpelier, and two sons, William Shontell of Waterbury and Fred Shontell of Moretown. The late Mrs. Fred Jewett was another daughter. There are seventeen grandchildren and twenty great-grandchildren. The funeral was held at 4 o'clock Sunday afternoon from the Catholic Church in Northfield, Rev. Fr. Lynch officiating.

There was a large gathering of friends and relatives. The flowers were many and beautiful, coming from neighbors and close associates. Employees of the O'Clair granite works were represented as well as the American Legion. Bearers were the four sons-in-laws, George Clement, F.A. Jewett, Frank Machia and John Jackman. The silk flag, which covered the casket at the home, was presented by the Relief Corps of Stowe. The United States Veterans bureau also presented a large flag, it being used during the service on the casket.

Following the prayer of Father Lynch at the grave, the Grand Army ritual was read by Harold Harvey. Burial was made in the family lot in Northfield. The funeral mass will be said Wednesday morning at 9 o'clock from St. Andrews Church here in Waterbury. The Knights of Columbus went to the home of Mr. and Mrs. Shontell to offer prayer for the deceased.

Mrs. Esther Shontell, of this town, sent seven sons to the army in this war. William, who measured 6 feet, 8 inches in height; Benjamin, 6 feet, 4 inches; Frederick, 6 feet, 3 inches; Leander 5 feet 9 inches; Louis 6 feet 1 inch; Joseph, 6 feet, 7 inches; Augustus, 6 feet. Two of the brothers were killed; and the mother draws a pension for one of them. Another left a widow, and two are pensioned on account of wounds.

"O, the strong Middlesex boys
Were mad for this war!
And the name of each hero
To the ages afar
Shall leave a track like a comet---
Each shine as a star.