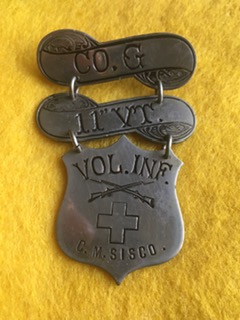 Charles Marcellus, son of Rev. Marvin Sisco, was born in Bangor, Franklin county, New York, April 19, 1845. He received his education in the public schools and during his boyhood worked on the farm and helped to clear timber land. During the civil war he enlisted in the Ninety-eighth New York Regiment of Volunteer Infantry, but he was under age and his father refused his consent, but afterward he ran away from home and at Essex, Vermont, enlisted in Company G, Eleventh Vermont Regiment, and went to the front. He was wounded at the battle of Cedar Creek and taken prisoner, but on the second day was retaken by the federal forces. At the hospital where he was taken, it was found necessary to amputate his leg. He continued in the service until 1865 when he was mustered out. He went to Malone, New York, and learned the trade of harness maker. From 1868 to 1871 he worked at his trade in Canandaigua, New York, and for two years at Victor, New York. In 1873 he started in business on his own account with a harness shop at Manchester Village, Ontario county. From 1880 to 1884 he worked again at his trade in Victor and then opened a shop at Shortsville, New York, where he has since lived. He has been successful in business and prominent in public life. In politics he is a Republican. In 1897 he was elected overseer of the poor and held that office for eight years. For several years he was a trustee of the incorporated village and president two years. In 1906 he was appointed postmaster of Shortsville and has held that position to the present tine. He is a member of Post 107, Grand Army of the Republic, and was its commander for three years; member of the Maccabees, of which he was record keeper for four years and commander five; member of Parlor Village Lodge, No. 88, Independent Order of Odd Fellows, of Shortsville, New York. In religion he is liberal. He married. December 10. 1883. Lottie A. Matherson Hulbert. They have one daughter, Maude M., married Charles A. Fiero and they have two sons. Charles Marcellus and John Alonzo Fiero.