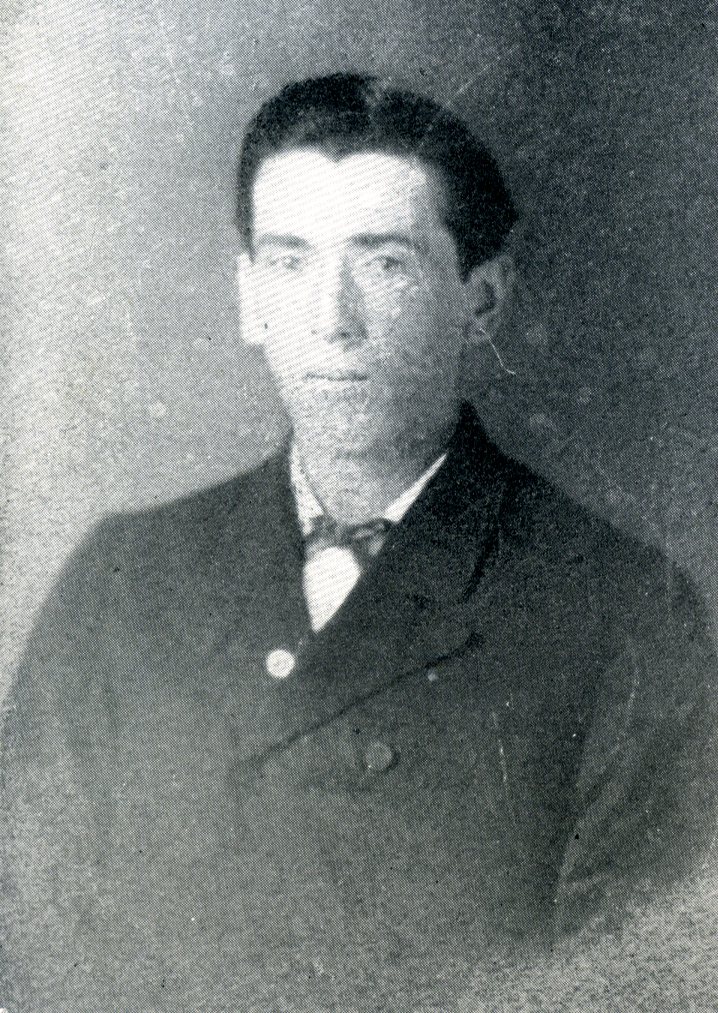 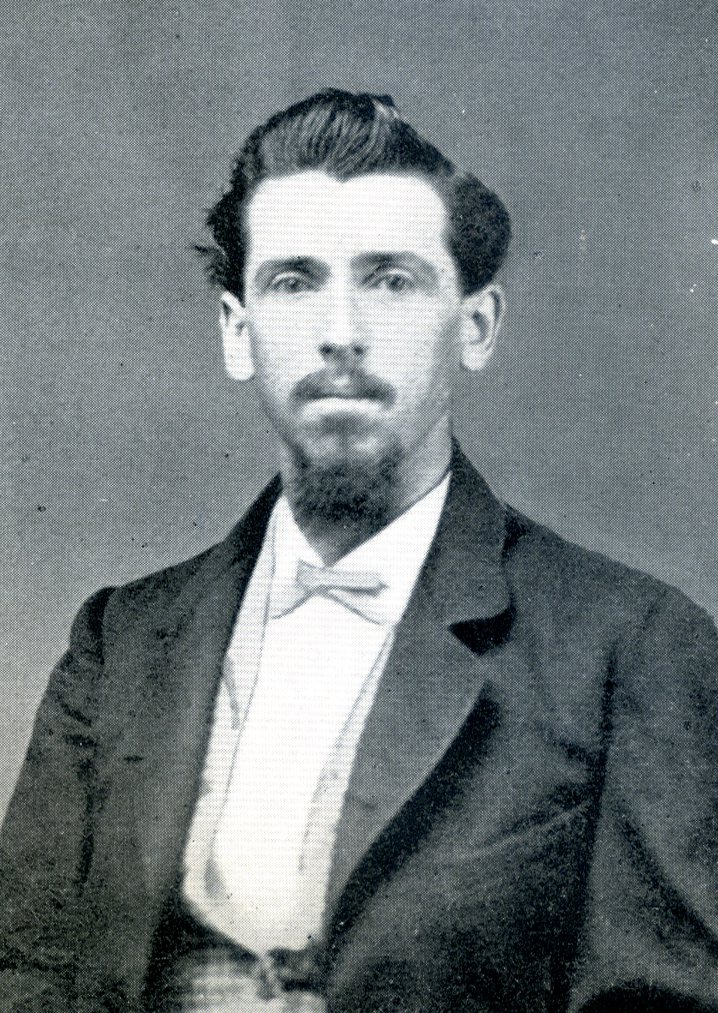 RALPH ORSON STURTEVANT volunteered and counted on the quota of the town of Swanton, August 20th, 1862. Was present and took part in the election of company officers of Highgate company, September 11th, 1862. Was born in Weybridge, Vt., September 3rd, 1838. My parents moved to Fairfield, Vt., in March, 1860. I entered Bakersfield Academy September 1st, 1860, attending school from term to term and teaching until volunteering August 20th, 1862. Was educated in the common schools (district and select) of my native town and Bakersfield Academy. At the time of enlistment I called myself a teacher, though brought up to the occupation of a farmer, and by trade a painter. My height was five feet ten inches, fairly well proportioned, straight and active, healthy and vigorous, light complexion, brown eyes and black hair, fairly well fitted for any reasonable amount of endurance. From the day of enlistment took an active interest in all matters connected with Highgate company, subsequently called Company K, and was with the company and regiment from date of enrollment until mustered out July 21st, 1863. In camp studious and somewhat reserved. I was easily engaged in argument and was quite earnest and tenacious, and was called by the boys of Company K as its lawyer, though at that time had no thought of following that profession.

Military drill, squad, company and regimental, brigade inspection, dress parade, picket duty and marching I enjoyed, but guard duty in and about camp I abhorred, and generally escaped it; was quite willing to do most anything else. I was often given a furlough to visit Washington, Alexandria, Mount Vernon, nearby battlefields, camps of other Vermont regiments, and other places of interest. Was with the company and regiment on the seven days' march to Pennsylvania, and participated in the great battle of Gettysburg. I came out all right, though considerably frightened many times during the battle. I was in it and happy when the battle was over. Have wondered many times since why I was able to remain in the ranks until the battle was over. I had enlisted understanding fully the consequences, and realized that in a fight the rank and file were expected to stand up, face the danger and do their best. I have never claimed only ordinary courage, and I am thankful it was sufficient for the crisis of battle.

My parents, Jeremiah Sturtevant and Sarah Sturtevant, were born in Vermont; father in Weybridge and mother in Fairfield. They were married in 1833, April 12th. Father was born in 1812 and died October 29, 1888. Mother born in 1813, June 7, and died November 10, 1893, and both are buried in the South Main St. Cemetery, old ground, St. Albans, Vt. Grandparents born in Vermont. Great-grandparents born in Fairfield, Conn., and were among the first settlers of Vermont, about 1773, on the banks of Otter Creek, within the limits of what is now Weybridge. My father's family consisted of four girls and four boys, Orissa, Abbie, Ralph O., Mary Ann, John H., Rosaltha, Ryland and Jed A.; all dead except Orissa, Ralph O., and Jed A. John H. died from a mortal wound at Spotsylvania Court House, May 12, 1864, and is buried In the South Main Street cemetery in the family lot.

I was mustered out with the regiment July 21st, 1863, and returned home to Fairfield, Vt., and in the fall resumed study at Bakersfield Academy. The Gettysburg campaign disqualified me for further service. I commenced the study of law in the fall of 1865, and was in the office with Judge Wilson and M. R. Tyler of Bakers- field, and Edward A. Sowles of St. Albans, and was admitted to the EYanklin County Bar in July, 1867. Opened an office in Swanton, November 11th, 1869, at this date, January, 1909, am still engaged in the practice of law. My sketch of personal experiences will be found on pages . . . and .... See Roster. My pictures taken In 1861 and 1864 are on page 420 and one of 1908, see Roster for page.

I was a private in Company K, carried a gun and used it at Gettysburg as well as I could. I have never fired a gun since the battle, and have had no desire to do so. I was a soldier, not for money or office, glory or renown, nor because I expected to enjoy the fighting or the horrid sights and scenes of battle. I was young, single, physically able, and my country was assailed, and I felt it a personal duty to respond and therefore volunteered. Hundreds of thousands did the same; I commend them for it. It was a duty. I joined the Masonic Order after enlistment and before being mustered into the United States service, and have since the war attained many degrees including the 32nd degree of Scottish Rights. I also joined early in life, 1865, the Independent Order of Good Templars, held some of its offices, and was for two years Grand Worthy Chief Templar of the Grand Lodge of Vermont. I represented Vermont Good Templars at the Right Worthy Grand Lodge of the world at its session held at London, England, July, 1873. I am also a member of the Independent Order of Odd Fellows. Am still an active member in all of these organizations, to which I have given much time and hearty support thus far. I am also a member of the Thirteenth Vermont Regimental Association, and for one year was its duly elected President, which position I considered honorable and complimentary. At the annual reunion of the Thirteenth Vermont Regimental Association, held at Burlington, Vt., was elected historian of the regiment and authorized to write the history of the regiment and cause the same to be published for distribution. A brief genealogical sketch will be found on page .... See Roster.

Ralph O. Sturtevant, a well known member of the Franklin county bar, died early Saturday morning of valvular affection of the heart. He had been in poor health for some time, but his death came as a surprise as he was about the streets the day before and took part in the pre-memorial exercises at the Methodist church, addressing, with other speakers, the school children. He complained in the evening of not feeling well, but retired as usual.
Mr. Sturtevant was born in Weybridge, September 3, 1839, was educated in the public schools and completed his education at Brigham academy, subsequently teaching school in various places. He enlisted in Co. K., 13th Vermont and took part in the battle of Gettysburg. He studied law with Judge Wilson and E.A. Sowles, in St. Albans, was admitted to the bar in 1867 and located in Swanton in 1869.
Mr. Sturtevant was a prominent Mason and Odd Fellow, well known as a Grand Army man, and active as a Good Templar. He attended the Good Templar Grand lodge of the world as a delegate from Vermont, at London, England, in 1869. He was always active in politics and at the time of his death was secretary of the first Republic district. Mr. Sturtevant has been engaged for several years preparing the history of the 13th Vermont, and the work, it is understood, is at press. He leaves a wife, who was Miss Mary Burgess of St. Albans.