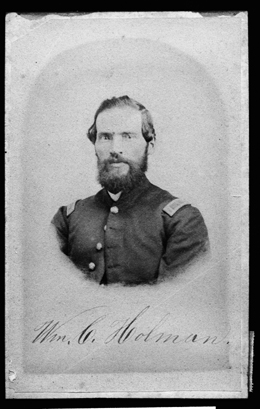 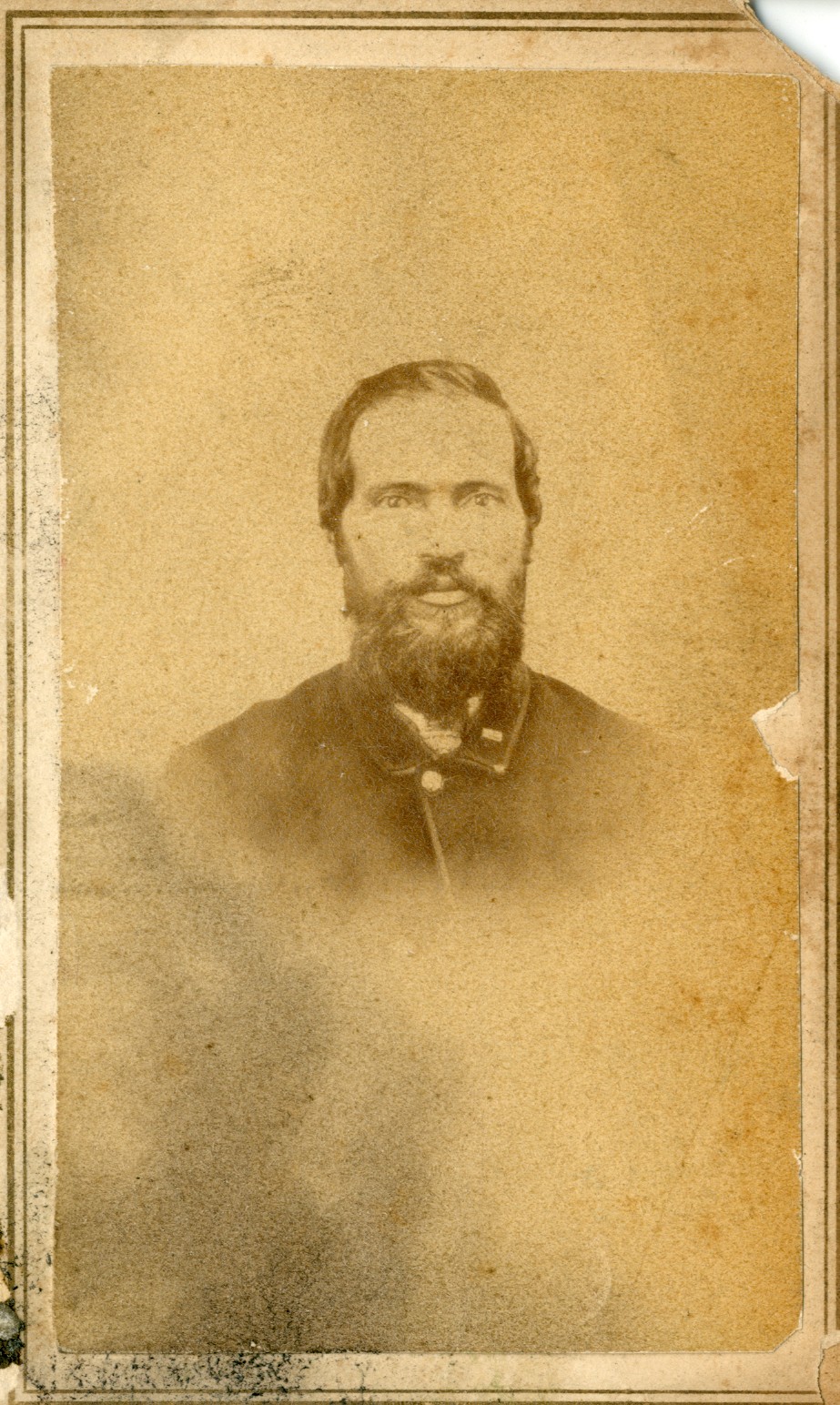 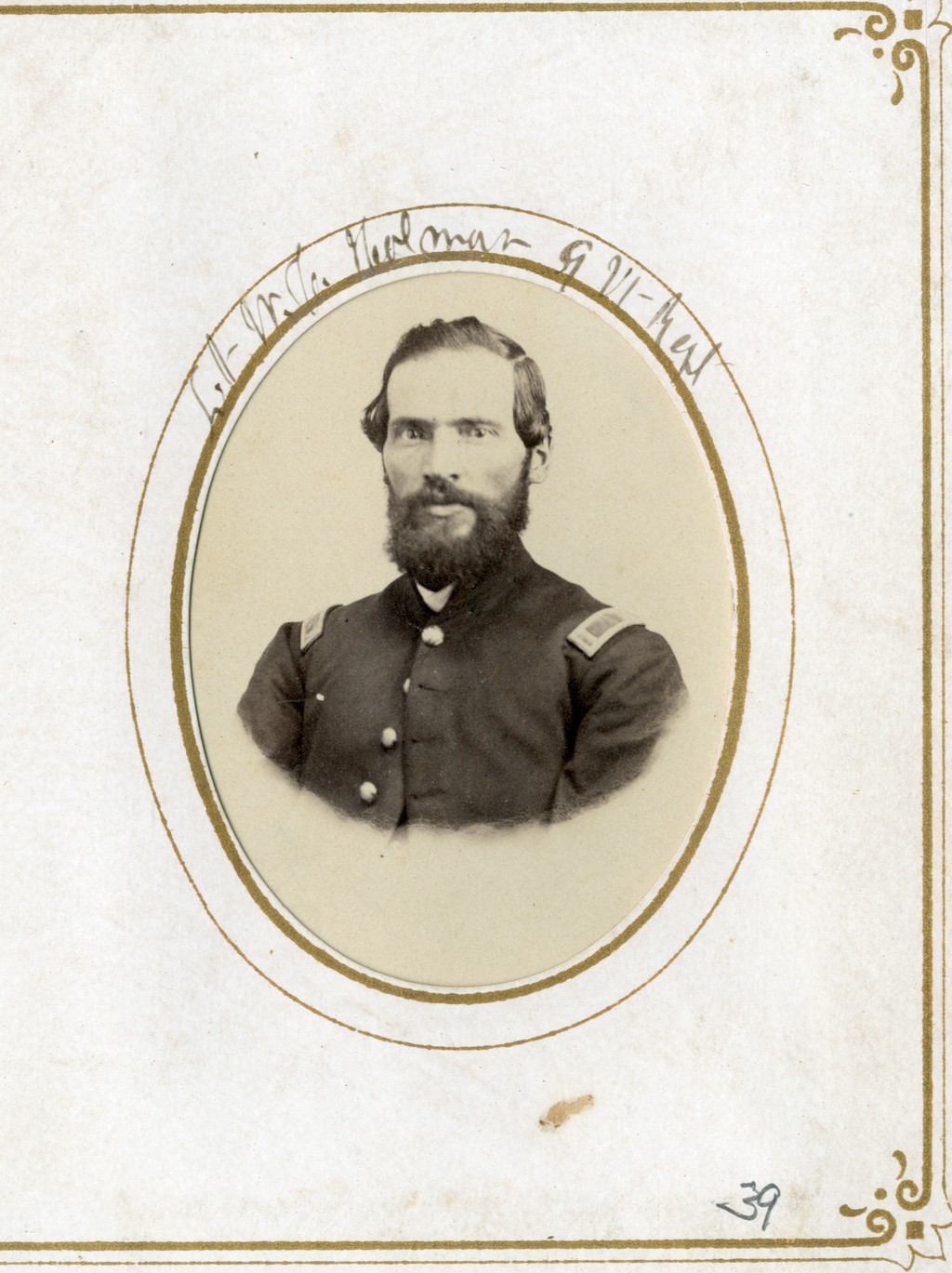 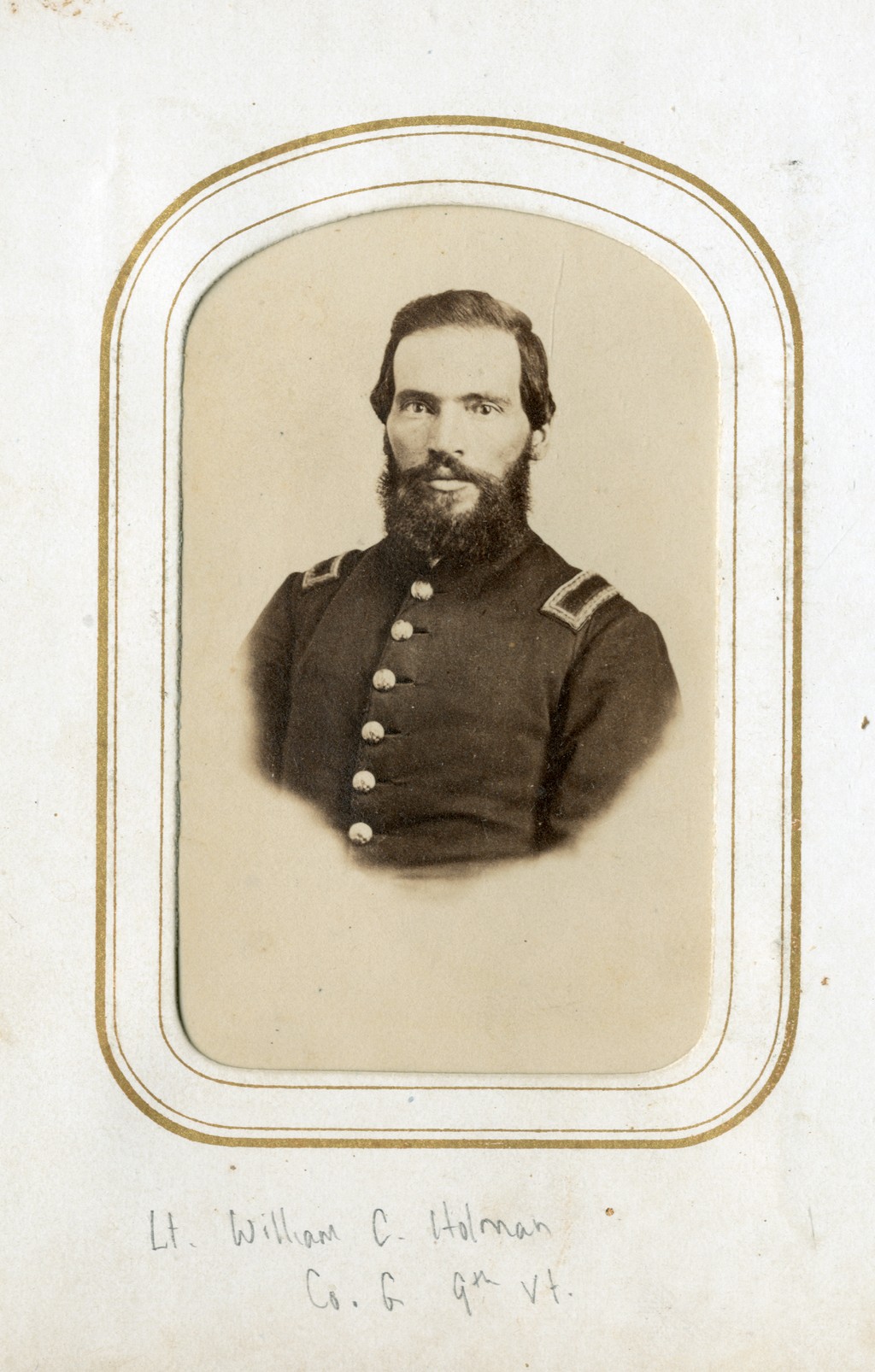 Wm. C. Holman was born in Braintree, Vt., July 29th, 1825, and died March 16th, 1890, aged 64 years, 7 mos., and 17 days. - When a boy his parents moved to Ohio, but returned to Braintree after an absence of about two years. With the exception of this brief period Mr. Holman's home was in Braintree during his entire life until some four or five years ago when he came to West Randolph to pass the remainder of his days. He lived in the home where he was born, through his youth, and when about thirty years of age – March 1st, 1854 – he married Miss Hannah R. Ferry, and continued upon the old homestead until his removal as above referred to. Mr. H. bore an active part in the war scenes of ‘61 to ‘65. He enlisted May 1st, 1862 in Co. G, 9th Vermont Volunteers, served awhile as recruiting officer, and wad then commissioned as 2nd lieutenant and went into the field, in1863 he received his commission as 1st lieut. He was taken prisoner at Harper's Ferry and paroled. After several months he entered the service again and was taken prisoner at Newbern, N. C. He then had some experience in rebel prison pens. He was confined at Salisbury, Macon, Savannah, Charleston and Columbia and was finally exchanged at Wilmington. He received his discharge March 1st, 1865. He was prisoner in the hands of the rebels about eighteen months, he was on parole about a year. During this time he was on duty at Camp Douglas near Chicago, guarding rebel prisoners, and taking squads of them through to the seaboard for exchange or change of confinement. At one time rebel sentiment in Chicago was at a white heat, and the presence of thousands of rebel prisoners at Camp Douglas gave rise to some ugly rumors. One of the leading Chicago dailies was "copperhead" in its vilest form, and that office was placed under military surveillance under Lieut. Holman. It did not take long to develop that sheer into a loyal organ. Mr. Holman in after years used to refer to his newspaper publishing experience of the war period with considerable pleasure. Mr. Holman's time in the ranks was somewhat cut short but other duties and the uncertainties that attend upon war, but he saw some service in the Shenandoah valley, in and about Winchester and also in North Carolina. Fortunately he passed through the war unharmed by shot or shell. But the same good fortune was not always to attend upon him. Peace has its dangers as well as war. While engaged in less prominent but perhaps no less honorable duty, killing hawks to protect poultry, he received from his own gun a full charge of shot in his wrist and forearm which caused him a long period of suffering and from which he never fully recovered. After the war was over and the piping and joyous times of peace had come again, he with multitudes of others who had marched with him through scenes of strife and blood, returned to the quieter and happier experiences of civil life leaving an ‘honorable record upon the pages of the nation's story. As a citizen he entered once more into the common duties of life. The esteem in which he was held by his fellow-citizens was shown in the duties of a public nature with which they entrusted him. He served several years as selectman, as lister, as grand juror, and more than twenty years was a justice of the peace. He represented Braintree in the legislature of 1868 and ‘69. He had considerable experience as a petit juror, and into whatever position he was called to aid in keeping the machinery of civil life in running order, he seems to have acted his part faithfully and well. He ranked among the first citizens of his native town in honor, integrity and trustworthiness. He was not a man that pushed himself into prominence, rather diffident than otherwise, but took the tasks imposed upon him and did the things the public asked of him in as faithful a manner as though they were his own private affairs. We do not believe that any charges can be brought against him as a public officer from any source that would entitle them to a moment's credence. It may be said that his life was comparatively uneventful and yet filled with the daily round of common affairs. By careful attention to the details of life he kept while living and left behind him at his death a comfortable and pleasant home for himself and his family.

He possessed in a high degree those qualities of character which bring men into favor with their fellows, pleasant and agreeable in manner, easily master of himself, ready to endure rather inflict an injury, kind and helpful, evenly balanced, more correct in daily conduct than is usual among men, free from those vicious habits that mar the physical as well as the moral life of men, conscientious finding it easier than the majority to do that which is right, his character, in many of its traits presents a worthy model for the men of a younger generation. For many years he was a member of the Congregational church on Braintree hill, and when he came to West Randolph to live he connected himself with the Congregational church in this place. He was exemplary in his Christian character, faithful in his attention to Christian duties, a worker in the Sunday School, a loving student of the Word of God. There is no doubt but that the study of the Bible had its positive influence upon his daily work, and that his religion was less a form than a living principle within. He found in the broad and consistent teachings of an evangelical faith those assurances and that peace that no vagaries of modern liberal thought, so-called, can give to the soul. He discharged well his duties as a soldier in the ranks of the church militant, and those who walked close by his side over the dusty and blood-stained battle-fields of life, have a solid ground for their faith that he has been mustered into the higher and holier ranks of the Church triumphant.