Rank and Organization: 1st Lieut., Co. E, 4th Vermont Infantry.
Place and date: South Mountain, MD, 14 Sep 1862.
Entered service at: Boston, MA
Born: 6 Feb 1838, Salem, NY
Died: 6 Aug 1902.
Buried: Prospect Hill Cemetery, Brattleboro, VT
Date of Issue: 17 Sep 1891.
Citation: Rode alone, in advance of his regiment, into the enemy's lines, and before his own men came up received the surrender of the major of a Confederate regiment, together with the colors and 116 men. 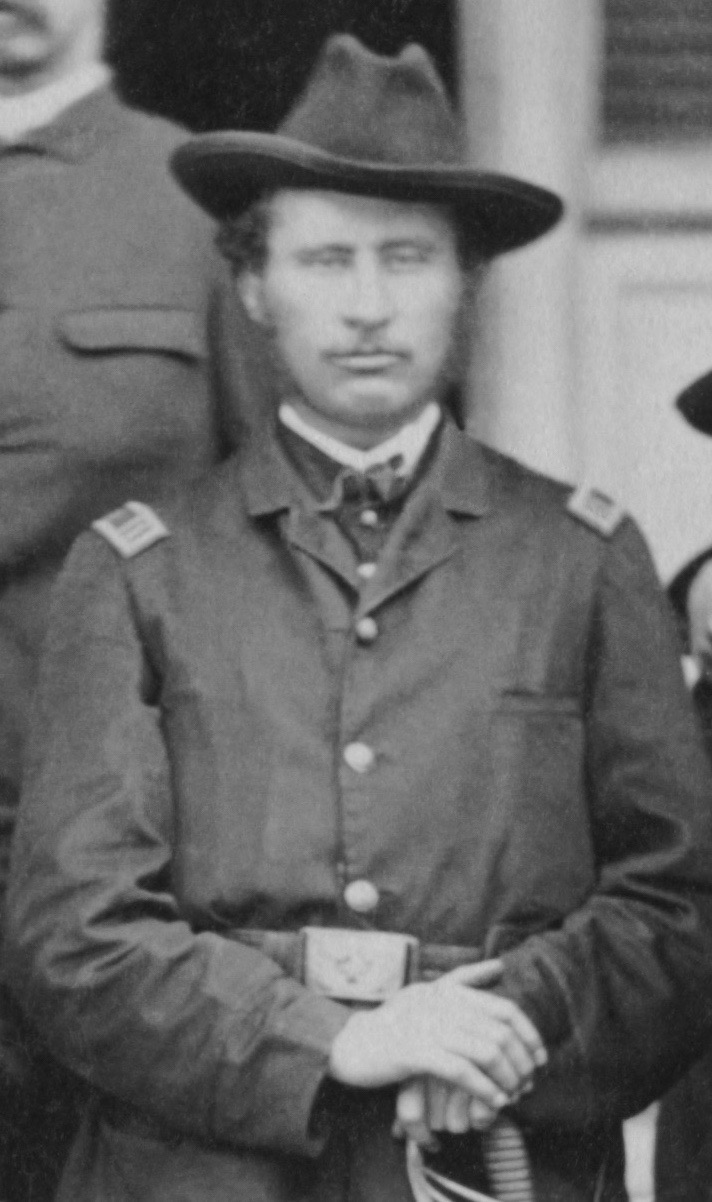 He attended the common schools of Londonderry, and his scholastic education was subsequently supplemented in the West River Academy. Commencing life as a clerk, he continued at Londonderry and at Bellows Falls, and then went to Boston as traveling salesman.

In August, 1861, he enlisted as a private in Co. F, 4th Vt. Vols., and soon after he was made sergeant-major. In the spring of 1862 he received the commission of 2d lieutenant, and in the summer that of 1st lieutenant. After the battle of Antietam he declined a captaincy in the line, and was appointed to the staff of Gen. E. H. Stoughton. From thence he was afterward transferred to that of Gen. George J. Stannard. In June, 1864, he was appointed assistant adjutant-general of volunteers by President Lincoln, and held that position until mustered out, with the rank of lieutenant-colonel in 1865. After the triumphant close of the struggle Colonel Hooker returned to Boston, and traveled through the eastern and western states. In the spring of 1876 he was admitted as junior partner to the firm of William Belden & Co., bankers and brokers, in New York. In 1876 he removed to Brattleboro, which has since been his home.

Colonel Hooker has very properly manifested patriotic interest in the political affairs of his adopted state. In 1878 he was appointed chief of staff with the rank of colonel, by Governor Proctor. In 1880 he was a delegate-at-large to the national Republican convention in Chicago, and in the same year was chosen a member of the national Republican committee. In the fall of 1880 he was chosen to represent the citizens of Brattleboro in the state Legislature, and reelected in 1882. During the first session he was unanimously elected judge-advocate-general by the Legislature.

Colonel Hooker was chosen sergeant-at-arms of the House of Representatives at the beginning of the Forty-seventh Congress. In 1879 he was elected department commander of the Grand Army of the Republic in Vermont, and was again elected in the following year. He also received the unusual compliment of nomination for the third term, but positively declined re-election.

Colonel Hooker was married on the 28th of January, 1868, to Minnie G., daughter of James and Love (Ryan) Fiske of Brattleboro. One son is the fruit of their union: James Fiske.

Col. George W. Hooker died suddenly Wednesday night of last week at his home in Brattleboro of heart disease. Two weeks ago, while in Springfield, he suffered an attack of heart disease and on his return to Brattleboro suffered a second attack. Since then he had experienced one or two other attacks but despite this he was not considered in a serious condition and his sudden death came as a distinct shock to the community with whose business and social life he has been so long and prominently identified. Colonel Hooker was a man of wide acquaintance and had attained a prominence in politics of national as well as state importance. Of late years he had devoted the greater part of his energies to the building up of the overall business of Hooker, Corser & Mitchell, one of Brattleboro's large industries, employing at the present time 200 hands. He had been president of the State Fair and Horse Breeders' association, and was the originator of the Valley fair, which has made Brattleboro famous, and president of that association from its origin until his death.

He was born in Salem, NY, February 6, 1838, and received a common school education. He began his business career as a clerk at Londonderry, and later became "an ambassador of commerce.” He was a veteran of the civil war, and had a brilliant record as a soldier. Enlisting as a private in Co. F, 4th Vermont Vols., in September, 1861, he was soon promoted, finally declining a commission as captain in the line. Later he served on General Stoughton's staff, and on that of General Stannard. He was with the latter at Gettysburg and with Lieut. G. C. Benedict caught General Hancock, as he fell from his horse in that battle after being badly wounded. For bravery, Col. Hooker was promoted to captain and assistant adjutant general of the U.S. Vols. He led nine regiments into battle at Cold Harbor, June 3, '64, where he was severely wounded five times. Two of these wounds were pronounced fatal at first by the surgeons. Recovering from his wounds, he returned to the front, and at the fall of Richmond organized the column that marched into the city. He put the 9th Vt. Vols. of General E. H. Ripley's brigade at the head, and they were the first union troops to enter the city. After the surrender of Richmond, he was ordered to Charleston, S. C., as adjutant general of that department, and remained until mustered out of service. He probably received more wounds than any other Vermont officer in any one action, and for his great gallantry at Antietam was given a medal by congress. In 1878 Col. Hooker was appointed chief of staff with the rank of colonel by Governor Proctor. In 1880 he was a delegate at large to the national republican convention in Chicago, and in the same year was chosen a member of the national republican committee. In the fall of 1880 he was chosen as representative from Brattleboro in the state legislature and reelected in 1882. During the first session he was unanimously elected judge advocate general. He was chosen sergeant at arms of the house of representatives at the beginning of the Forty-seventh Congress. In 1879 he was elected department commander of the Grand Army of the Republic in Vermont, and was again elected in the following year. He also received the unusual compliment of nomination for the third term, but positively declined re-election.

He married Minnie G., daughter of James and Love (Ryan) Fisk of Brattleboro in 1868, who with a son survives him.

Funeral services were held at Brattleboro, Saturday afternoon. The body lay in state from 1 to 2:30 and was viewed by hundreds of townspeople and visitors, including Governor Stickney and distinguished citizens from all parts of the state and elsewhere. Lucien Howe played the church organ preceding the funeral The services were conducted by Rev. Mr. Marvin, and selections were sung by Mrs. Harriet Brasor Pratt. The services were attended by the employees of Hooker, Corser & Mitchell, the Grand Army Post, Valley Fair directors, Loyal Legion and other organizations. There was a profusion of floral tributes. The bearers were Judge J.M. Tyler, Judge William C. Holbrook of New York, Col. H. E. Taylor, Col. Thomas Hannon of Bennington, Hon. J. L. Martin, H. F. Brooks, W. C. Mitchell, and B. G. Corser. The burial was in the Prospect Hill cemetery.

Hooker's medal was presented to the Antietam National Battlefield Park in September 2007.