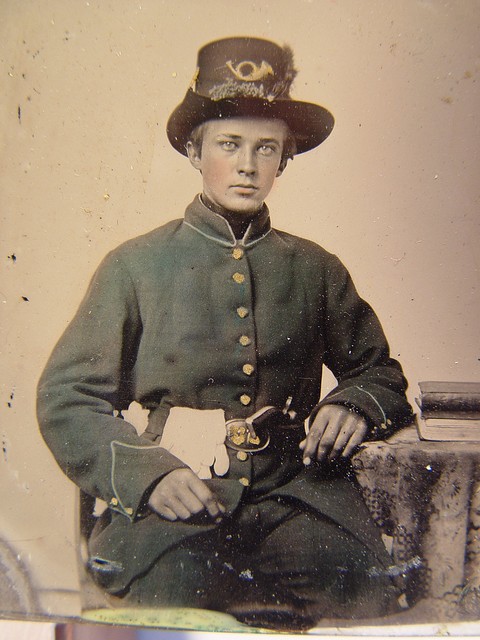 I have some additional information that may be of interest to you regarding, Cpl. Lodwick D. Underwood (my 2nd Great Grandfather), of Cos. I & F, 4th Vermont Infantry Regiment, 1st Vermont Brigade of the 2nd Division, 2nd Brigade, VI Corps, Army of the Potomac and Army of the Shenandoah, Middle Military Department. First, his name is listed as Ludwig A. Underwood, in the official Army records and here on your website. Concerning this aspect to his service, he was attempting to prevent his father, Joshua Underwood, from discovering him at the recruiting stations within the immediate area. You see, Lodwick (nickname "Ludwig") was 15-yrs old at the time he was attempting to enlist. Additionally, he used his brother's middle initial, as means of furthering his aims. He attempted the name and age game around 5-times, before his father finally relented, and signed the authorization papers allowing someone under the age of 17, to enlist into military service.

Regarding his birthdate, he actually, was born on Sunday, February 22, 1846. He lied about his age and birth year until his father signed him over to the Union Army. In addition, I uncovered a fact that was listed to his service: "He was listed as a deserter, on July 4, 1863; after being unaccounted for in the evening muster report of July 3rd. Now, regarding this fact, Lodwick was an excellent marksman and sharpshooter and was given the opportunity to put his skills to work in the vicinity of the rocky outcrops of Round Top/Devil's Den. During the night, around 2:30 am, he was captured by Confederate soldiers lurking around in that vicinity. He was not around for the skirmishes of July 10th at Funkstown, MD. He later was discovered among "Paroled and Exchanged Prisoners of War," at Annapolis, MD, about July 26-29, 1863. According to the Returns From Military Posts Record, at Brattleboro Barracks Stockade, Brattleboro, Vermont, he was shipped back by train and spent 2-weeks in confinement. After letters were received by the commanding officer of that stockade from those he was counted amongst as paroled, and letters of character from his commanding officers, NCOs, and others in his regiment, prior to his General Courts-Martial Board being convening; he was released from confinement, he rejoined his unit in late August-early September 1863. Eventually, he would be promoted to Corporal and transferred to Co. F, 4th Vermont, as indicated on your website.

Along with this brief synopsis, I have included in this message a picture of his headstone that provides evidence of his actual name and birthdate. Additionally, I've also, attached a photo of him in his green uniform. I hope that this provides some much-needed information in helping you to accurately chronicle the lives of these brave but very young soldiers. If, for any reason, you feel it necessary to contact me please, feel free to do so!