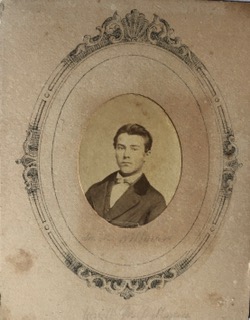 Forty-seven years ago L. Merrill Wellman, a native of this town, started in business in Athol, . Mass. The Boston Sunday Globe contained a picture of Mr. Wellman and a sketch of his career, sent from Athol. He is the oldest man working in the marble and monument trade anywhere in the vicinity of Athol, and not only has had a long and honorable business career there, but is one of the few veterans of the Civil war living there who was confined in the famous Libby prison.

Mr. Wellman is a son of D. Lewis and Francis Walker Wellman. He was the 16th of a family of 17 children. He received his district school education in the round brick schoolhouse now used by the town of Brookline as a town hall and also attended Leland and Gray Seminary at Townshend.

At an early age Mr. Wellman enlisted as a recruit in 1863 in Company H. 8th Vermont regiment, and went to Louisiana. A brother, Marshall, who was shot there, was the first man killed in battle in that regiment. In July, 1864, Mr. Wellman was transferred to Virginia and served in the Shenandoah Valley campaign. It was here that he was taken prisoner by the Mosby Guerillas and sent to Libby prison, where he was confined until the close of the war.

For a number of years Mr. Wellman was in business with John C. Blake, but some 14 years ago bought out his partner.

Mr. Wellman is a member of the Grand Army, having joined in 1872 Birchard post of Townshend. He is also a member of Athol lodge of Masons and a charter member of Tully lodge of Odd Fellows. Mr. Wellman married in 1878 Miss Mary F. Williams, oldest daughter of Dr. John Williams. He has two children, Louis W., paymaster on the Boston Northern electric railway, and Frances W., who lives in Athol.