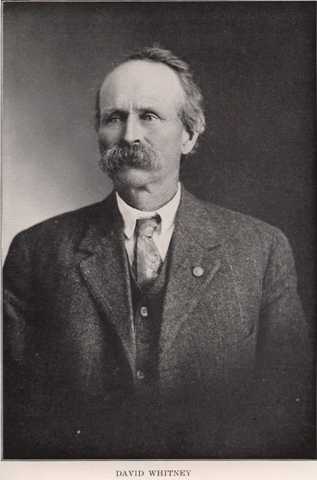 The old settlers of this county builded wiser than they knew and it is eminently fitting that in this biographical volume their records be presented for the perusal of coming generations in this county. Their descendants today little realize the many discouragements and obstacles which they had to meet, and for this reason the record of their lives should be intensely interesting to their sons and daughters. The rude sod houses of the seventies are seen no more and even the dreaded grasshopper is no longer a foe to be dreaded, like a summer drought or a winter blizzard. Verily, it can be said that no county in Iowa can show today more marked changes than Osceola county. This volume contains the interesting life history of many pioneers who settled here forty years ago, and among these David Whitney occupies an honorable and conspicuous place.

David Whitney, distinguished veteran of the Civil War and one of the most highly respected citizens of Osceola county, was born February 21, 1844, in Orange county, Vermont, and is the son of Daniel and Julia (Hall) Whitney. He received his common school education in the Green Mountain state, and when only eighteen years of age offered his services in behalf of the Union. He first enlisted on the 10th of December, 1862, in Company C, Fifteenth Regiment Vermont Volunteer Infantry, and served until August 5, 1863, with his company. On December 26, 1863, he enlisted in Company G, Tenth Regiment Vermont Volunteer Infantry, and served until July 10, 1865. He was wounded on April 2, 1865, before Lee, retreating from Richmond. On this day only twenty-three of his company reported for duty, and eleven of them, among which was Mr. Whitney, were wounded. This was the last day on which the roll of his company was called until he was finally mustered out. He was in ten of the hardest fought engagements of the Civil War, and was with Grant during the summer of 1864 and through the winter of 1864-65 and went through all the terrible experiences which befell the Union troops while storming Petersburg. He fought through all the battles of the Wilderness, and was present at the battle of Winchester, Fisher's Hill and Cedar Creek. It was at this last engagement that Gen. Philip Sheridan made his memorable ride, which has been immortalized in verse, and Mr. Whitney well remembers the day when this occurred. In 1913 Mr. Whitney had the honor of attending the fiftieth anniversary of the battle of Gettysburg in the town of that name in Pennsylvania.

Immediately after the close of the Civil War Mr. Whitney came to Iowa and located first in Blackhawk county, where he owned eighty acres and lived for five years on his farm. Marrying in 1871, he came to Osceola county and homesteaded one hundred and sixty acres in section 18, of West Holman township. Here he and his young wife began housekeeping in a farm structure sixteen feet square and ten feet high. Although this house was only ten feet in height, yet they had an attic bed room. It was sided with tar paper and common rough boards, and here they lived until they were able to erect a more commodious house. The first year he raised on a little sod corn, just enough to fill the homestead requirements. Most of the time he worked out for the neighboring farmers and in this way earned enough money to make a bare living. In 1873 the grasshoppers came along and ate all of his crops, which made things seem gloomy then. He had no crops and he had no money, and his neighbors were in no better shape than he was, and he and his wife went to Cherokee, where he worked for four months. In 1874 he took over one hundred and sixty acres of land adjoining his farm on the west, which he secured from a man who had decided to leave it to the grasshoppers, and left for more promising territory. Mr. Whitney had the foresight and good judgement to see that this land would one day become valuable and that even the grasshoppers would one day be brought under control. 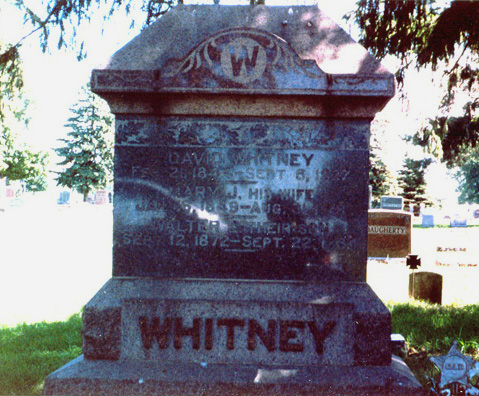 That Mr. Whitney prospered is shown by his beautiful farm in Osceola county today, stretching over five hundred and ninety-six acres and improved in a way which delights the eye of the passerby. In addition to his land holding in the county he is the owner of three hundred and twenty acres in Minnesota, which gives him a total acreage of nine hundred and sixteen acres. In 1889 he built his present home and in 1895 he built his present barn. A cyclone that year destroyed his barn and made it necessary for him to erect a new one. In 1913 he built a modern horse barn, which has an eighteen-foot concrete wall for the lower half of the barn. He is now cultivating about two hundred and sixty acres of land and used the rest as pasturage and hay land. He raises considerable live stock and markets about eighty head of cattle annually.

Mr. Whitney was married in 1871 to Mary J. Cutshall, who was born in Perry county, Indiana, on January 16, 1849, the daughter of Eli and Dorca Cutshall, who were among the earliest pioneers of Buchanan county, Iowa, in Indian times. Mr. and Mrs. Whitney have reared a family of ten children: Clarence A., who married Flora Helt and lives on a farm east of Sibley, has three daughters, Versa, Albertine and Cleo; Orville E. is still living with his parents; Mable, the wife of Walter Helt, is the mother of five children; Bertha lives in Oklahoma, where she has a farm of three hundred and twenty acres, which she homesteaded herself; Frank, Fred, and Emma, the next three children in order of birth, are still with their parents; David, the eighth child, married Dorothy Salzman, and lives in Minnesota on his father's farm; Charles and Harold, the two youngest children, are also with their parents.

Mr. Whitney has been a life-long Republican and has always taken a deep interest in political affairs. However, he has never been a candidate for any county office, although he has served on the school board of his township for several years. He is a loyal member of the Grand Army of the Republic , and takes an active interest in the affairs of this organization. He is a member of the Baptist church and in his younger days was very active in church work, and has always maintained a deep interest in religious work of all kinds and never misses the opportunity to lend his support in behalf of all enterprises which might improve the moral welfare of his community. Mr. Whitney has now reached his three score and ten years, the psalmist's allotted span of human life, and is still hale and hearty and takes an active interest in the issues of the day. His life has been well spend and when he answers the last roll call he will leave a record behind him which will be an honor to him, to his friend, to his family and to the country which he has served so well.