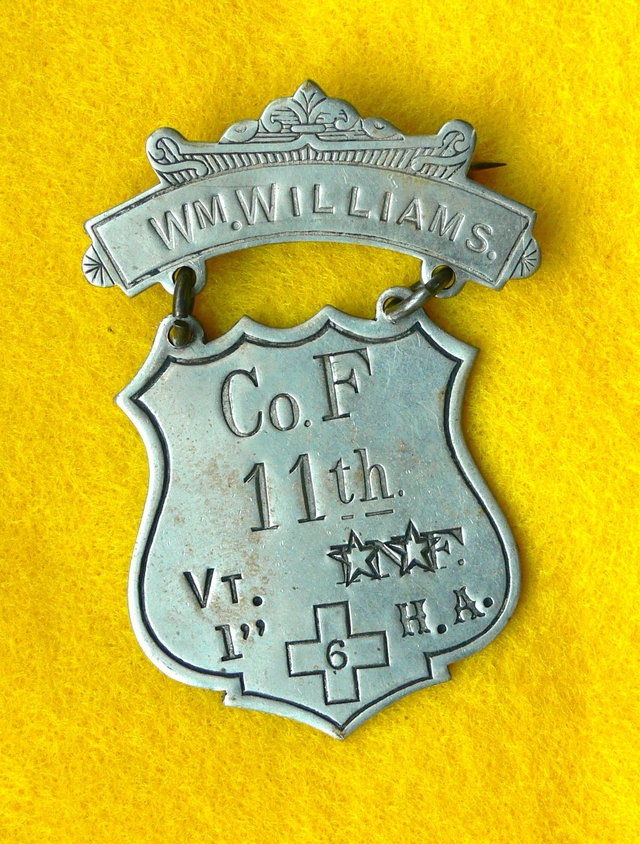 Wm. Williams was born in Dumberton, Scotland, June 21st, 1841. He was the oldest son of Thomas and Margaret Anderson Williams.

When six years of age his parents came to this country and settled at Roxbury, Mass.

Mr. Williams was educated in the public schools of Roxbury. After completing his education he entered the Roxbury Iron works, where he was employed until the outbreak of the Civil War.

On August 6thm 1861, he enlisted in the navy for one years' service, was mustered in at Charlestown navy yard and was placed on the ship, "Fear Not." Later he was transferred to the Gulf Squadron, where he took part in the expedition and capture of New Orleans. Last summer he was rewarded, by the government, with a bronze medal for his noble conduct during this expedition.

On the expiration of his naval enlistment he returned to his home in Roxbury, where he learned that his parents had moved to Albany, Vermont. Mr. Williams proceeded Albany. When he reached his parents he learned that his brother, Tom Williams, had enlisted in the army and was at that time in the army of the Potomac. Mr. Williams determined to reach his brother, therefore, he enlisted in Company F, Eleventh Vermont Volunteers of heavy artillery, but did not reach the front until after his brother had lost his life. The regiment of which Mr. Williams was a member took active part in the battles of the Wilderness, Spottsylvania, and Cold Harbor. While the 11th Vermonters were protecting the pioneers who were destroying the Weldon railroad Mr. Williams was among the troops which were captured. He was six months a prisoner of war; during the time he was held in seven different prisons, viz: Pemberton, Libby, Lynchburg, Danville, Andersonville, Charleston and Florence. He was paroled Dec. 19, 1864 and with other comrades was transferred to the army hospital at Annapolis, Md., as soon as he had sufficiently recuperated he enlisted as a volunteer nurse, serving out the time of his parole in that capacity. From the hospital he returned to guard duty about Washington, being stationed at Forts, Md. He was finally discharged Aug, 25, 1865. He was one of the witnesses on the famous trial of General Wertz, the commander in charge of Andersonville.

On receiving his discharge, Mr. Williams came home to Albany, taking up the duties of a peaceful citizen. He married Ellen S. Rowell of Albany, Dec. 27, 1865. They settled on a farm at South Albany, where they made their home until six years ago when they moved to this place. This couple were blessed with three children, one son and two daughters. The son died in infancy but two daughters were spared to make this union happy.

That Mr. Williams was regarded by his townsmen as a man of sterling character, and ability is shown by the various trusts they confided to him. He served as selectman for seven consecutive years, several years as justice of the peace and auditor. He represented the town in the legislature of 1888; also served several years as postmaster at South Albany.

In 1906 Mr. Williams moved to this place, and during the short stay of six years won a host of faithful friends. Two years ago his health began to decline but he fought vigorously against the disease and there was promise of a recovery until last fall when a sudden turn came which caused a loss of hope. The last twelve weeks he was confined to the bed. All that loving hands and kind hearts could do was done but without avail and the end came on Feb. 28th.

He leaves to mourn his loss a wife, Mrs. Ellen Williams; two daughters, Mrs. Chester King of Passumpsic and Mrs. Merton Anderson of South Albany besides several grandchildren. He also leaves three half-brothers, J. R. Williams and A. G. Williams, both of Bridgewater, Mass., and A. C. Williams of South Albany.

The funeral, as spoken of last week, was held Monday forenoon at his late home on High street, the Rev. O. E. Barnard of Albany officiating, assisted by Rev. A. W. Barnlund of this place. The interment was in the South Albany cemetery.