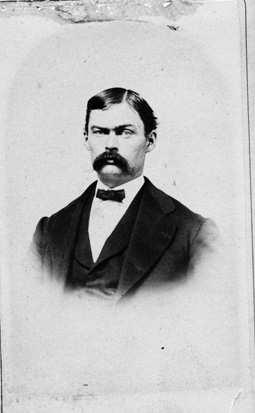 Letter from Captain Elmer Keyes, Co. H, 16th Regiment, to his wife Lettie, after the Battle of Gettysburg

My ever dear Lettie:

This is probably the most welcome message that you ever received from me. I have time to write but few words. This is the first opportunity I have had. I have been engaged nearly all the time for the past few days in one of the worst battles this continent ever knew. We are all well except Floyd, who went to the hospital this morn. None of us were hurt in battle but Floyd is all tired out, but think he will be all right when he gets rested. 2 out of my company were killed and 7 wounded. A spent-ball struck me, knocking me down but I got right up again madder than ever.

E.T. Davis of Felchville was killed. O such scenes such scenes. I cannot write now but will if ever I get time. I am sitting on the battlefield now and there is a man here who says he will try and get this to some P.O. He is waiting, I must close. We have suffered for want of food on the long march and the fight. I haven't had a mite of clothing on me night or day except my Blouse & Pants for 3 days and nights and slept right in the mud without a tent or a sign of anything. We lived on excitement for two days certain for I didn't eat more than two or three hard tacks all the time. We won a great victory and are now following the enemy. I counted 115 dead Rebels today on a piece of ground 4 rods square. The troops have all left, except the W. Brigade. We are burying the Rebs now and shall leave as soon as we get done. Our Reg't won the admiration of all for its gallantry, having captured 3 stand of colors and lots of prisoners.

I will write again as soon as I possibly get time. From your loving husband,

Elmer Duane Keyes died at his residence on Grove street soon after 7 o'clock last evening, after a brief but painful illness.

Mr. Keyes was born at Reading July 15, 1838. His family name was Robinson, but at a very early age he was adopted by a family named Keyes and assumed at that time the name he afterwards bore. He worked on the farm where his adopted parents lived until the age of 21, teaching school during the winter seasons.

Early in the war he entered the service as a lieutenant in company H of Col. Veazey's regiment, the 16th Vermont volunteers. December 31, 1862 he was promoted to the captaincy of his company and occupied that position until the end of his term of enlistment. His company, with its regiment, bore a very prominent part in the battle of Gettysburg.

After leaving the army Mr. Keyes engaged in business in Felchville, where he remained until September 1870, when he came to Rutland. October 1 of the same year he bought the retail grocery business of S.F. Paige and took into partnership N.R. Bardy, who had been the head clerk in Mr. Paige's store. This partnership continued until June 1, 1883, when Mr. Bardy retired. The business had assumed very large proportions during these years. The wholesale branch had been established and the last year of the original partnership had reached a volume of over $600,000 yearly.

Upon the retirement of Mr. Bardy, Mr. Keyes associated himself with C.O. Perkins, a traveling representative of the firm, who has, for the past few years, been the managing head of the house. In June, 1885, Erwin E. Keyes, the elder son of the head of the firm, was taken into partnership.

The business has always been conducted in the brick building on Evelyn street where it was established nearly a quarter of a century ago. Mr. Keyes purchased half of the block soon after beginning business in Rutland, and a few years later secured the remainder of the building. He gradually withdrew from the active management of the Rutland business soon after his son entered the firm, and for the past few years has devoted his time largely to real estate and other financial interests in the West.

Mr. Keyes married in 1862 Lorette Charlotte Hawkins of Reading. Three children where born to them, of whom two sons, Erwin E. Keyes and Arthur H. Keyes, together with Mrs. Keyes survive him. Mr. Keyes leaves two brothers, W.F. and Charles Robinson, and a married sister, all of whom reside in Boston.

He has never sought office, but served as colonel on the staff of Gov. Washburn. At the time of his death he was a director of the Baxter National bank and of the People's Gas company, vice president of the Bank of Volga, South Dakota, vice president of the Volga Equitable Loan and Trust company, and a director in several other financial institutions in various parts of the West.

Mr. Keyes has been a sufferer from chronic bronchitis and asthmatic troubles for nearly 15 years, and during the past five years has had several severe attacks of illness. He returned from a six weeks' business trip through the West about a month ago, Mrs. Keyes joining him on the homeward journey at Chicago. During this trip he drove for 34 miles over a South Dakota prairie and contracted a cold from the effects of which he never recovered. His chronic affections developed emphysema, which eventually caused his death. He was a Mason and was a faithful communicant of Trinity Episcopal church.

Mr. Keyes was typical of New England thrift and integrity. From the position he occupied in his native village, his business ability and personal integrity raised him to that of the head of the largest firm in the wholesale grocery business in the state of Vermont. As a business man he occupied a unique position. His untiring energy and industry were ever fruitful with the best results, and he commanded to an unusual extent the respect and confidence of all who were in any way associated with him. In his home life he was ever a thoughtful and loving husband and parent and a most genial entertainer of the many he delighted to call friends.

In speaking of his death last evening Mr. Bardy, his former partner, paid a warm tribute to his personal character and business ability. "Mr. Keyes was," he said, "a man of the most thorough and painstaking instincts. His word was always regarded as the equivalent of his name and he never engaged in any undertaking without entering into a careful and thoughtful examination of its minutest details.

"The growth of our business under his direction was phenomenal. The business was confined entirely to the retail branch until a relative of Mr. Keyes, a Chicago tobacco manufacturer, sent to us a small quantity of fine cut tobacco and appointed the firm his representative in this section. Mr. Keyes was going over to the other side of the mountains and, as an experiment, took three boxes of the tobacco with him. He sold ten kegs of it before he returned, and that was the little beginning of the present enormous business.

"Mr. Keyes was prompt and active in his business life, never wasting words when time was more valuable than speech, but at home or in society he was ever genial."

The arrangements for the funeral are not yet completed and the date and time have not been fixed upon.