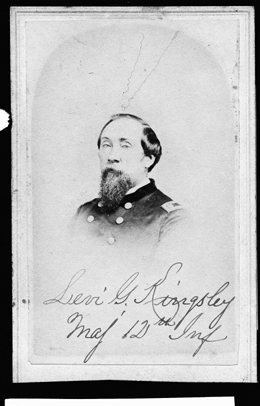 Gen. Levi G. Kingsley, one of the most prominent citizens of Rutland, and of this part of Vermont, Civil war veteran, retired merchant and public servant, died at his home, No. 73 Pine street Saturday night at 9:30 o'clock after a long illness with a complication of diseases. Gen. Kingsley had been in failing health for the last year and a half, being critically ill for the last two weeks. He lost consciousness five days ago and since then has been apparently asleep, his pulse at times being barely perceptible.

Gen. Kingsley's regiment, the first Vermont volunteers, was rated among the finest contributions of Vermont to the Union forces during the war following secession and the general served with distinction on many battle fields. At the time of his sale of the hardware store on Merchants row to Parker & Ryan he was the oldest merchant in Rutland, having continued in one line of business longer than any other man within the confines of the city. He played an important part in the political history of the community, holding office in Rutland as a town, village and city, and being its second mayor.

At the time of his death Gen. Kingsley was a trustee of the Vermont State Soldiers' home in Bennington and he was also a member of the board of visitors to Norwich university, being appointed by Gov. J.A. Mead and reappointed by Gov. A.M. Fletcher.

The funeral will be held at Trinity church tomorrow afternoon at 2:30 o'clock and burial will be in Evergreen cemetery. The prayers at the house at 2 o'clock will be private.

Levi Gleason Kingsley was born in Shrewsbury, May 21, 1832, being the eldest son of Harvey and Elvira Gleason Kingsley. His direct ancestors came to America early in the 18th century, and settled near Hartford, Ct. His great-grandfather, Solomen Kingsley, came to Vermont from Wapping, Ct., after the close of the Revolution, locating in Ira. Gen. Kingsley was one of a family of three, consisting of himself, Nahum P. And Elizabeth. He was educated in the common schools, and spent two terms at Brandon seminary. In 1854 he spent one year at Norwich, which university in 1882 conferred upon him the honorary degree of Bachelor of Science. He was for many years a trustee of Norwich.

Gen. Kingsley was for a time station master on the Rutland and Burlington railroad, at East Clarendon, and from 1857 to 1859 a clerk in the company's freight office in this city.

In 1858, with Benjamin F. French, he purchased the hardware store of J. & A. Landon, which they removed in 1863 to its present location on Merchants row, where it is known as the Parker & Ryan store. In 1865 the Kingsley-French partnership was terminated by the death of Mr. French.

Gen. Kingsley, soon after coming to this city, became a member of the Rutland Light Guard, organized in 1858 under Gen. H. Henry Baxter, and later commanded by Gen. W.Y.W. Ripley. Mr. Kingsley was elected lieutenant of the company in 1859, and responded with the company in 1861 to the call for troops, joining the 1st regiment of Vermont volunteers. He went to the field as second lieutenant of company K of Rutland and served with credit at Fortress Monroe and Newport News, Va., during the regiment's three month's term. He re-enlisted with many members of the old company in 1862, being elected captain. On the organization of the 12th Vermont volunteers, he was promoted to the rank of major, which he held until the expiration of his term of service.

After leaving the field, company A, 9th regiment, Vermont National guard, elected him captain, and he became colonel of the regiment in 1865. In 1874 he was elected by the Legislature quartermaster general of Vermont, and held the office until 1882. During his administration the department was reorganized, and put on a firmer basis. He was elected brigadier general in 1882, and again in 1884, declining re-election in 1886. On his retirement from the National guard the governor of the state issued a general order, highly complimentary to the soldier.

After the war Gen. Kingsley became active in commercial and political affairs in this city. He was elected president of the village of Rutland in 1886, selectman of Rutland town for four years, and mayor of Rutland city in 1894, being the second mayor, preceded by the former governor of Vermont, John A. Mead. In 1890 he was made state senator from Rutland county. He was a member of the fire department for 20 years, and captain of Killington Steam Fire Engine company for 17 years.

Gen. Kingsley was a director in the Baxter National bank, and a trustee of the Marble Savings bank. He was an old member of Masonic bodies, and had been grand captain-general and grand generalissimo of the grand commandery of Knights Templar of Vermont. He was also a member of the Loyal Legion and a vestryman of Trinity church.

In November, 1857, Gen. Kingsley married Miss Luceba J., daughter of Walter and Eliza Ross of Clarendon, who died in 1862. In June, 1865, he married Miss Cornelia Sophia, daughter of Benjamin and Sophia Roberts of Manchester. Mrs. Kingsley, who died Oct. 1, 1902, was a sister of Mrs. H. Henry Baxter. Of this union two sons were born, Henry Baxter, who died November 14, 1903, and Harvey Roberts of this city, who survives him.

Gen. Kingsley retired from active business August 31, 1905, when he sold his hardware and furniture business to Richard A. Ryan and Henry S. Parker. He was at that time the oldest merchant in the city, having conducted the business for 46 years.

The death of General L.G. Kingsley after living nearly three quarters of a century in this county and city, takes away a personality and presence that linked the younger generation significantly with the past.

General Kingsley was closely identified with Rutland's history, and his connection with business, military affairs, public and social life brought him into contact with two, if not three, generations of Vermonters, so that the grief which marks his death represents the respect and love of an unusually comprehensive group of citizens and friends.

Included in this respectful grief are the few remaining pioneers who remember the Kingsley family as conquerors of the wilderness as early as the eighteenth century, and who recall their early resident in Ira and Clarendon. A few railroad men will remember General Kingsley as a station master at East Clarendon and as a clerk in the offices at Rutland. Even the business career of the deceased demands the memory of the older men for its beginnings, so that his military services from 1859 until the close of the Civil war really come into the more recent happenings of his useful life.

A man of high principles and purposes, it was inevitable that Rutland should call General Kingsley into public life, so that he was at various times president of the village of Rutland, selectman of the town, mayor of the city, state senator and was also elected quartermaster of the state by the Legislature.

A member of the fire department, highly honored by Masonic bodies and a churchman of true piety and diligence, it is rather for a personal character of true kindliness, exalted patriotism and unflinching integrity that he will be best remembered. Young and old will join in humble tribute to a life and character which aptly typified the highest ideals of city, county, state and nation, to which his services were ungrudging and considerable.

Very largely attended funeral services were held yesterday afternoon at Trinity church at 2.30 o'clock for the late Gen. Levi G. Kingsley, who died Saturday evening at his home on Pine street, Rev. Joseph Reynolds officiating. There were also prayers at the house at 2 o'clock. At the church the funeral party was met by delegates from Roberts post, G.A.R., Killington commandery, Knights Templar, and the Woman's Relief Corps.

Flowers in profusion were received from the many friends of the veteran and from the various organizations of which he was a member. During the morning, when the friends and neighbors viewed the body, the large reception room was a veritable bower of flowers, the casket being literally imbedded in them. There were tributes from Roberts post, Woman's Relief Corps, trustees of the Vermont Soldiers' home at Bennington, Killingtom commandery, K.T. Davenport chapter, R.A.M., Center lodge, F. And A.M., teachers of the L.G. Kingsley school, trustees of the Marble Savings bank, directors of the Baxter National bank, the rector, wardens and vestryman of the Trinity church, the Sons of Veterans and the members of the Rutland high school track athletic team.

The Grand Army ritual was read at the family lot in Evergreen cemetery by Commander George F. Brown and Chaplin W.H. Mitchell. A very impressive sight followed when each veteran present placed an offering of flowers upon the casket, following which taps were sounded by a bugler.

Those present from out of town were Mr. And Mrs. Hugh H. Baxter of New York, George Roberts of Washington D.C., Capt. Samuel Kelley of Salisbury, Buel Derby and C.D. Williams of Burlington, Gen. E.H. Ripley of New York and ex-Gov. E.J. Ormsbee and Mr. Flint of Brandon.