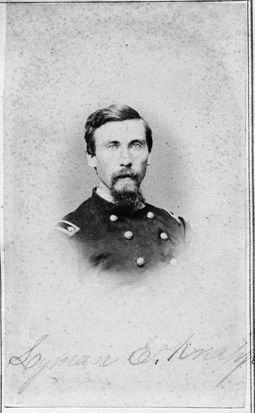 Knapp, Lyman E., of Sitka, Alaska, son of Hiram and Elvira (Stearns) Knapp, was born in Somerset, Nov. 5, 1837. He was the fourth in direct line of descent from Capt. Joseph Knapp, of Taunton, Mass., who commanded a company in Colonel Titcomb's regiment, war of the Revolution. His grandfather, Cyrus Knapp, removed to Dover about the beginning of the nineteenth century. His first ancestor in this country came from Yorkshire, England, and settled at Brighton, Mass., in 1640.

The subject of this sketch prepared for college at Burr Seminary, Manchester, and graduated with honors from Middlebury College in 1862. Directly after graduation he enlisted as a private in Co. I, 16th Regt. Vt. Vols., for nine months, but was elected and commissioned captain of the company before mustered into the United States service. He received his baptism of fire in the battle of Gettysburg and was wounded in his right shoulder by a bullet from a spherical case shot during the famous bayonet charge of the 16th Vt. Regt., to meet the rebel charge under Pickett. The wound proved not to be serious, and after discharge from his first service he re-enlisted, raised a company of volunteers at Townshend, which was assigned as Co. F, to the 17th Regt. Vt. Vols., and in command of that company he served in Grant's famous Wilderness campaign of 1864. The 17th saw very severe service, was engaged in fourteen of the historic battles of the war and suffered greater losses in killed and wounded, during its sixteen months service, than most of the regiments which put in their full terms of three and four years. Captain Knapp was engaged with his regiment in all these battles and was wounded in two of them, Spotsylvania and the capture of Petersburg, though not severely. He was promoted major, Oct. 25, 1864, and lieutenant-colonel a few days later. He also received a brevet commission from the President "for gallant and meritorious action" in the battle of Petersburg, April 2, 1865.

At the close of the war he engaged for a short time in teaching at Burr & Burton seminary, Manchester, then assumed the control and management of the Middlebury Register, and he was editor of that journal for thirteen years. During his work in connection with that paper, he read law, was admitted to practice in the Vermont courts in 1876, which practice he continued, residing in Middlebury, until his removal to Alaska to assume the duties of Governor of that territory, to which he was appointed on the 12th day of April, 1889.

In 1872-'73 he was one of the clerks of the Vermont House of Representatives. In 1886-'87 he was an influential member of the same body. For twenty years, from 1869 to 1889, he was the trial justice of the peace of his county, before whom the more important and difficult cases were brought for adjudication. He was register of probate for two years and became judge of the same court in 1879, which office he held by successive elections until he resigned in 1889, to accept the office of Governor of Alaska.

He was chairman of the Republican committee of his county eight years, and has served as member of the school board for his district; chairman of the county temperance society; vice-president of the Western Vermont Congregational Club; town clerk for a number of years; treasurer of the Addison county grammar school; chairman of the business committee of the Middlebury Congregational Religious Society; town assessor of taxes; chairman of the county evangelization committee, and connected with every movement for the promotion of morals and philanthropy which came within his reach. Sometimes he made addresses on occasions like the Fourth of July, Memorial Day, religious conventions, temperance meetings and society anniversaries, and wrote editorial articles and communications for periodicals and newspapers other than his own. These articles were highly appreciated and much sought after.

In college he was a member of the Delta Upsilon fraternity and belonged to the honorary Alumni society, Phi Beta Kappa, after graduation, and has held the office of president of the local chapter. Soon after the war he became a member of the G.A.R. and served several terms as commander of his post. His interest in the work of the learned societies never flagged. He is still a member of four historical societies, including the Alaska Historical Society of which he is president, of the National Geographic Society, of one ethnological society, of the American Institute of Civics of New York, whose object is to promote a higher and purer citizenship; and has made geology and mineralogy the special study of many of his summer vacations.

In addition to his professional and official work he had an extensive loan business of which he conducted the eastern and western agencies in Kansas, Iowa, Minnesota, Dakota, and Washington, and he had the management of several trust estates. All these business connections he laid aside in 1889 on leaving for Alaska.

He became Governor of Alaska on taking the oath of office, April 20, 1889, since which time he has conducted the business of the executive of that territory. The duties of that office have been exceedingly onerous, and the responsibilities heavy and wearing. He has made four extended annual reports, which have been published and have become the authority on matters embraced therein.

Politically his sympathies were ever with the Republican party. His first vote for President was cast for Abraham Lincoln in 1860.

He became a member of the Congregational church at the age of fifteen, and he ever remained devotedly attached to the principles of that faith.

He was united in marriage, Jan. 23, 1865, at Washington, D. C., with Martha A., daughter of Ebenezer and Corcina (Jones) Severance. As the fruit of this marriage they have: George E., Frances A., Lyman Edwin, and May A.