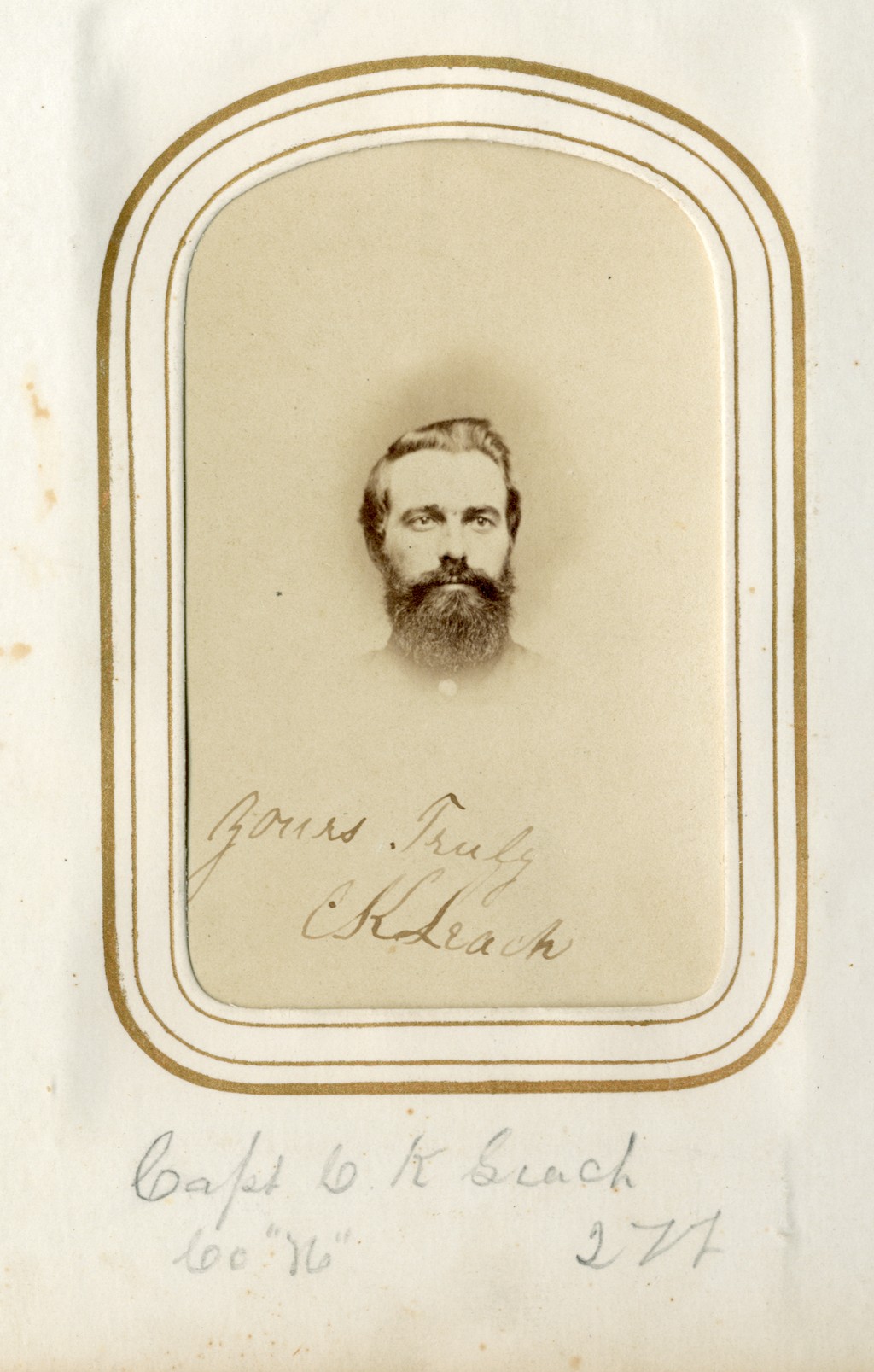 Leach, Chester K., of Fletcher, son of Joseph and Olive (Burton) Leach, was born in Fairfield, Jan. 17, 1830.
He was one of a family of seven children and his early history is that of hundreds of young men in his native state, born and bred upon the farm and in the intervals receiving a meagre education in the district schools.
From 1856 to the time of the civil war he was employed in the vocation to which he had been brought up, but sharing in the general outburst of patriotism that followed the fall of Fort Sumter, he enlisted in the 2d Regt. of the old Vt. Brigade and was mustered into the United States service June 20, 1861. He was immediately made 2d Lieut. of Co. H., and participated with his regiment in the first battle of Bull Run. After this defeat he was present at every important battle and engagement in which that veteran regiment took part, and received his discharge as 1st Lieut. after three years of gallant and arduous service.
Captain Leach was married, Oct. 8, 1851, to Ann A., daughter of Samuel and Hannah (Thomas) Montague, and four children have been the issue of the union: Justin S., Zelia J. (Mrs. D. C. Robinson), Byron L. and Myron C., the two last being twin brothers.
After his discharge from military duty Captain Leach, like Cincinnatus, returned to the plough, and, after cultivating different farms, finally settled on the old homestead, where he still remains. He is a successful dairyman and also produces a large crop of sugar from his orchard of more than two thousand maple trees.
Captain Leach has received the blue lodge degrees of Free Masonry, and unites with the Mt. Vernon Lodge of Morrisville. He has also a membership in J. M. Warner Post, No. 4, G.A.R.
He was elected as the Republican candidate to the state Senate in 1878 and was a member of the committee on military affairs and agriculture. Besides this position he has also held many offices of minor importance in the town where he resides.

Chester K. Leach, aged 79 years, a long time resident here, died Wednesday, February 17, at his home in Cambridge. The funeral was held at his home at 11 o'clock this morning. Mr. Leach is survived by his wife and three children, Justin S. Leach, of Hyde Park, and Mrs. D.C. Robinson and Myron C. Leach of this place. He had held all the minor town offices and was elected to the state senate in 1878. About fourteen years ago he removed to Cambridge where he had since resided.