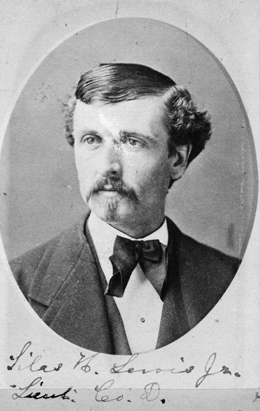 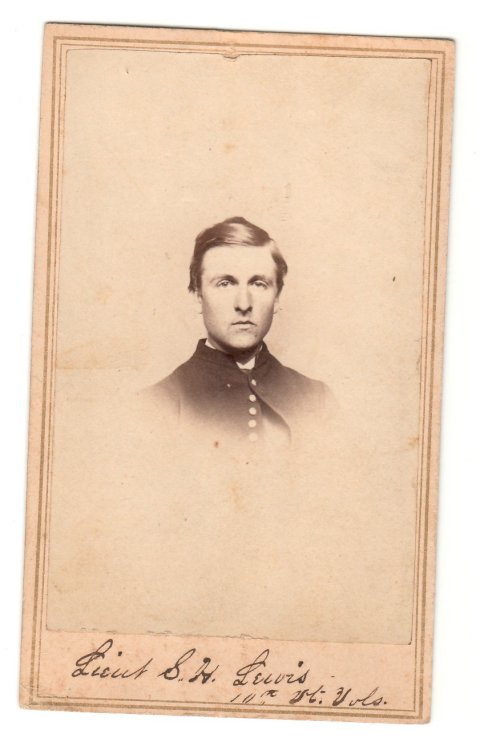 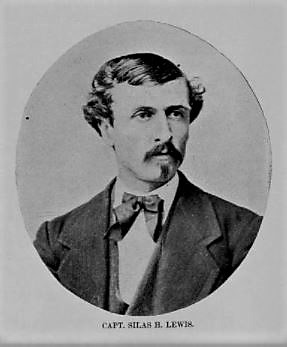 Silas Huntington Lewis was born in Berkshire, Franklin county, Vt., May 16th, 1841. He was a son of Silas Huntington and Lucia Ellsworth Lewis. Silas, Jr., was carefully instructed in the common schools of his native town, where he remained with his parents until he was fifteen years of age. He then left home and went to St. Albans and engaged as clerk in the mercantile business, having been employed by W. W. Post. He continued with Mr. Post about three years and then accepted a higher position with A. O. Brainerd, Esq., where he remained until July, 1862. His intelligence, courteous manners, and earnest attention to business won the confidence of his employers and made him a favorite with all who came to their establishment. He was a young man of clean habits, of unsullied reputation, industrious and ambitions of success; and to all human foresight, the peaceful currents of his life were likely to lead to still more advantageous associations and a successful business career. But many of his friends in Franklin county and in St. Albans had already enliste d, and others in the volunteer army had passed through a half-dozen battles and had sent the thrilling story of their heroic achievements flaming back to old Vermont, and he determined to join one of the two companies then being recruited in Franklin county—one at Swanton and the other at St. Albans, and both designated for the Tenth Regiment.

He enlisted July 22d, 1862, and upon the organization of Co. I, Aug. 11th, at St. Albane, he was appointed a Sergeant. As a non commissioned officer in this company he was associated with Bogue, Church, Fuller, Gilson, Wheeler and White, all of whom received commissions early in their military career, either in the same or other companies of the regiment. Sergeant Lewis was promoted to First Sergeant of Co. I, June 1st, 1864, and six days later Second Lieutenant of Co. F. Nov. 2d, 1864, he was again promoted and commissioned First Lieutenant of Co. D. But previous to the time of receiving this last promotion he was detailed upon the division staff and served as aide-de camp to Generals Ricketts and Seymour during the last year of his term of service. He was an officer of impetuous courage; and possessing, as he did, a sanguine nature, fervid energy and an adventurous spirit, he was impelled to daring deeds. At the battle of Cold Harbor on the 1st of June, in the famous charge of Ricketts' division upon the fortified line of the Confederate General Rhodes, the Tenth Vermont, having gained the most advanced position of any reached by the Sixth Corps, Sergeant Lewis sprang over the breastworks and captured a Confederate Major, a Lieutenant and several men. For this act of gallantry Colonel Henry recommended him for promotion to Second Lieutenant. While on the division staff, he was mentioned by General Ricketts for "gallantry and efficiency" in the battles of Winchester, Fisher's Hill and Cedar Creek; and in subsequent battles, by General Seymour. In the triumphant assault of the Sixth Corps upon the enemy's works at Petersburg, April 2d, 1865, Lieutenant Lewis was brevetted captain "for gallant and meritorious conduct."

Captain Lewis was a valiant soldier; and while his name will be held in revered memory by his friends, for his many private virtues and their own special reasons, he, with the rest mentioned in these pages, and many who are unnamed, the State that gave him birth will claim as one of her intrepid sons, ever to share the honor and distinction accorded to Vermont troops in the war of the rebellion. On his return to St. Albans at the close of the war, he engaged in mercantile business under various partnerships until 1869, when by purchasing other interests, he went into business by himself, and soon be. came a popular and prosperous merchant- His death occurred in 1871, as the result of an accident, and caused universal sorrow in the community where he resided. On this sad occasion the St. Albans Messenger used the following language: "It has been a long time since any casualty has so shocked and filled with sorrow the hearts of this people. • * • • No man could have been taken from our midst whom society would more miss than he. He was active in nearly every worthy social and public enterprise, and by his frankness, his kindness and his agreeable manners, he made friends of all who knew him. Whatever faults common to us all he may have had, we always knew that he had a large and manly heart. Its impulses entered into all his life. The death of such a man cast a deep gloom over the hearts of all our people, and he will long be remembered and mourned as a brave soldier, a courteous gentleman, a kind and loving husband and father, a noble friend and worthy man."

We are shocked and pained to hear that about three o'clock Wednesday P.M. Capt. Silas H. Lewis of this village was shot and fatally wounded about two miles south from here while hunting foxes. The account given is that he struck a fox with the butt of his gun, and the concussion discharged the piece, throwing its entire contents of shot into his bowels. He was accompanied by H. D. Sabin, who took him to the house of Wm. Caldwell and Mr. Lewis sent the latter for his wife and the physicians. After being shot, he stood for a moment, put his hand to his side and said to Mr. Sabin. " I am shot, and have got to die." When the physicians arrived they pronounced the wound fatal. The fire had burned through his vest and the wound in his body was nearly two inches across. Under the influence of opiates he apparently did not suffer severe pain, but lingered consciously, recognizing and speaking with his friends, until nearly seven o'clock, when he passed away. The scene upon the arrival of his wife, about an hour after the accident, was touching beyond description. His remains were taken home in the evening and his funeral will be attended (probably with military and Masonic honors) on Saturday forenoon.

Capt. Lewis was about 30, and leaves a wife and one child, besides father, mother, brothers, sisters, and a large circle of other relatives and friends. During the war he served with bravery and distinction, first in the 10th Vermont Regiment as a sergeant, and lieutenant, and afterwards as an aide-de-camp to Maj. Gen. Ricketts, commanding the Third Division of the Sixth Corps. For gallant and meritorious service he was brevetted a captain.

Since his return home he has been engaged in mercantile pursuits, and was doing a large business. He was a member of the Congregational church, the Masonic Fraternity and the Grand Army of the Republic, and was a prominent and highly esteemed member of society. His death casts a deep gloom over the hearts of all our people, and he will long be mourned as a brave soldier, a courteous gentleman, a kind and loving husband and father, a noble friend and a worthy man.