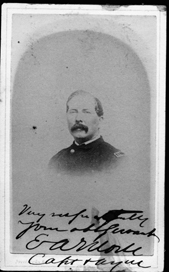 Capt. Edmund R. Morse, one of the most prominent citizens and leading business men of Rutland, died Friday aged about 65 years. He was attacked some 10 days ago with typhoid pneumonia, which also developed acute Bright's disease, from which he sank rapidly.

Capt. Morse was a native of Boston and came to Rutland some 35 years ago and established a drug store in company with Dr. E. A. Pond, from which large and substantial wealth was soon acquired.

He was a veteran. He went out as quartermaster of the 7th regiment, and he was promoted to a position on the staff of Gen. Benjamin F. Butler, and was assigned to the department of the gulf. He took a leading interest in the Grand Army of the Republic and served one term as State commander. Since the close of war he had mainly devoted himself to real estate transactions.

He never sought public office, but has at times served in local political offices. He was an ardent Mason.

He married Jennie, the only daughter of Hon. Rodney C. Royce, a distinguished member of the Vermont bar. To them one son was born, Col. E. Royce Morse, now the general manager of the Vermont Marble company.

The funeral of Capt. Morse will be under the direction of the Knights Templar of Vermont. Rev. Norman Seaver, D.D., of Montpelier will be the officiating clergyman. The burial will be made in Evergreen cemetery, near Rutland.