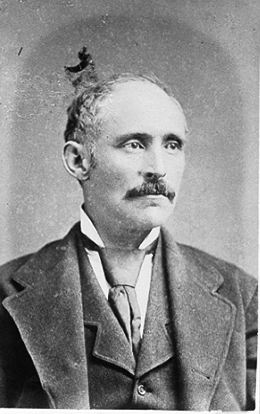 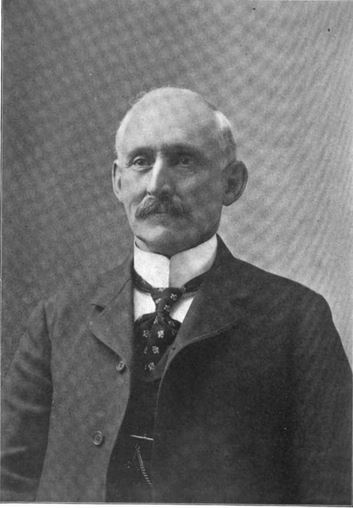 He passed the days of his youth in labor on the paternal acres, and gained his education in the common schools of Morristown, and later at Johnson Academy. When he had arrived at man's estate, as he had a natural taste for mechanical pursuits, he purchased a saw mill, which furnished him with employment till 1860, when he moved to Stowe and engaged in a similar enterprise, constructing a mill in that town.

When President Lincoln issued his call for volunteers he enlisted in Co. D, 11th Regt. Vt. Infantry, and followed the fortunes of that organization during its entire service, including the last grand advance on Richmond. During this period he was constantly at his post, with the exception of two months spent in the hospital, and was honorably discharged in July, 1865.

After his release from the army he was variously employed as carpenter and millwright for several years, and in 1871 he commenced the manufacture of butter tubs. In this he continued for fourteen years, when he sold the business and went to Brooklyn, N. Y., and was employed in the Hatters Fur Cutting Co., but after a time returned to Stowe and again purchased his old mill, where with improved machinery the firm of P. D. Pike & Sons are now engaged in the manufacture of butter tubs, making use of several improvements in the mechanical appliances of the trade which have been patented by himself, and from small beginnings has derived an increasing and prosperous business.

Though favoring the political principles of the Republican party, Mr. Pike has not found much time for official life, so urgent and various have been the demands of his private affairs, but he has faithfully discharged the duties of those town offices which have been conferred upon him. He was elected to a seat in the House in the Legislature of 1880, and served on the committee on manufactures.

Honorable Paphro D. Pike, a leading citizen of Stowe, and a prominent business man of Lamoille County for many years died at his home in that village Wed. morning from the effects of a paralytic shock.

P. D. Pike was born in Morristown on Dec. 1, 1835, was one of four children of William and Nancy Hitchcock Pike. He was a great grandson of Jonathan Pike, whose son Seth was a native of Windham, Conn, but who came to Brookfield, later moving to Sterling, and finally settling in Morristown.

He was educated in the district schools, and Johnson High School, and for a time taught school in Stowe.

Being possessed of a natural taste for things mechanical, he began to work in mills before becoming of age, and soon became the owner of a large sawmill, which he abandoned soon after the outbreak of the Civil War.

On August 9, 1862 he enlisted at Stowe, in Co. D. 11th Vt. Regiment, Vt. Infantry, and was commissioned a 2nd Lieutenant in May, 1865, being discharged in July of that year.. The Regiment was sent to Washington for the defense of the capital, during which time it was made a heavy artillery regiment. The young man remained with the regiment during the entire service, with the exception of two months he spent in the hospital.

After his return from the war he was engaged as a carpenter and millwright until 1871 when he commenced the manufacture of butter tubs.

In 1885 he sold out, and located in Brooklyn, NY, where he was employed by the Hatters Fur Cutting Co. In 1899 he returned to Stowe, purchased the old mill, and resumed the manufacture of butter tubs, round boxes, and veneer packages.

Gradually this business gave way to the manufacture of hard and soft wood lumber.

In 1890 Mr. Pike and his sons, Lewis A. and Arba A. formed a partnership under the firm name of P. D. Pike & Sons. The firm does an extensive business, giving employment to 25 men the year round, and handling nearly a half million feet of lumber.

Mr. Pike was a sturdy Republican, and although the demands of his business was great he found time for public office.

His townsman have testified to their confidence in him by electing him to the Legislature in 1880, when he served on the committee on manufactures.

In 1890 he was chosen State Senator of Lamoille County, and here served on the committee of temperance, military affairs, general and manufactures.

He was a public spirited man, and was deeply interested in all that tended toward the achievement of the town. The Palisades Park in Stowe was a gift of Mr. Pike, to the town.

In 1858 the deceased was united in marriage to Miss Abigail Towne, daughter of Luke and Eunice (Camp) Towne. Mrs. Pike survives with three sons, Arba A. of Stowe, Lewis A. of Chicago, and Fred M. of Brooklyn, NY. He also leaves a sister, Mrs. Lydia Sargent of Stowe. Much sympathy is extended to the family in their bereavement.

The floral display was very beautiful, including a large number of pieces from relatives and friends.

The members of H. H. Smith Post and WRC attended in a body, and also the employees of P. D. Pike and Sons factory.

Business places were closed during the hour of service. The bearers were his three sons, and a grandson.