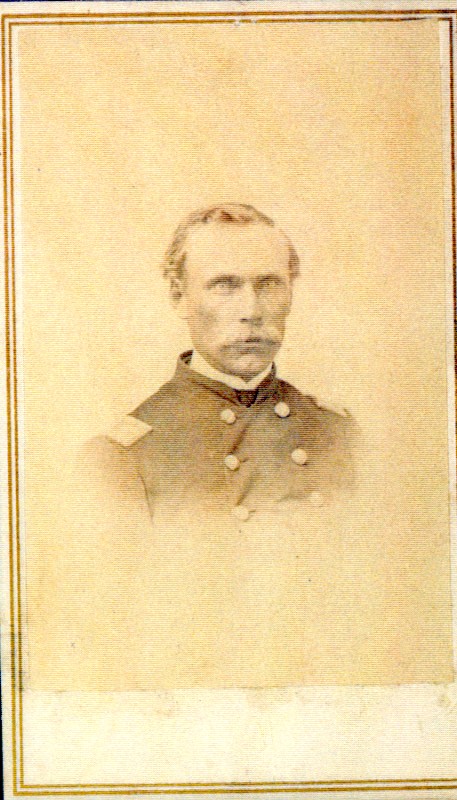 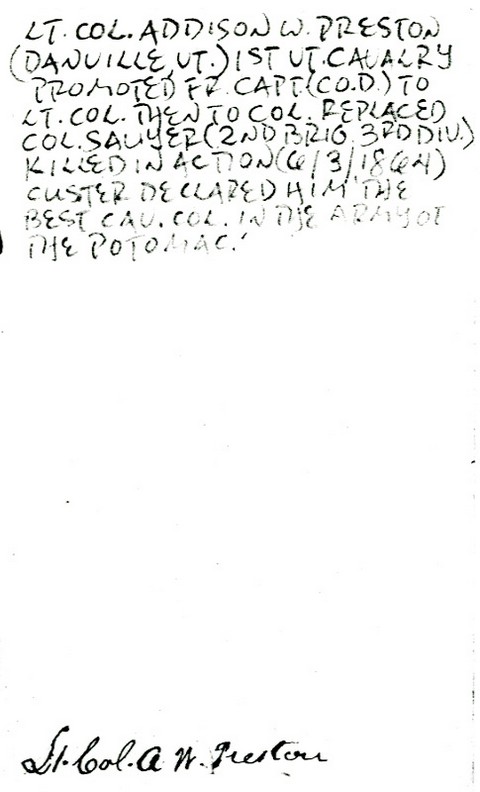 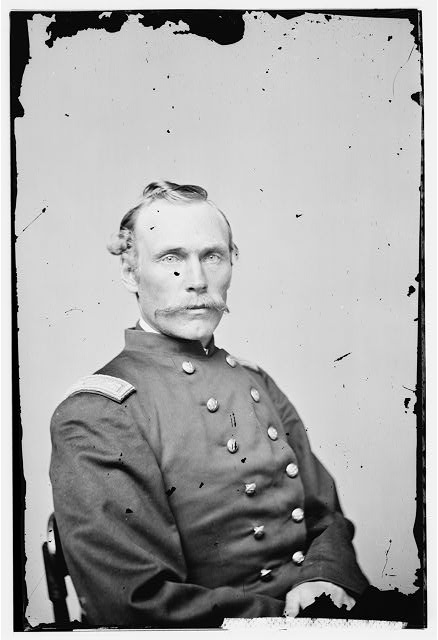 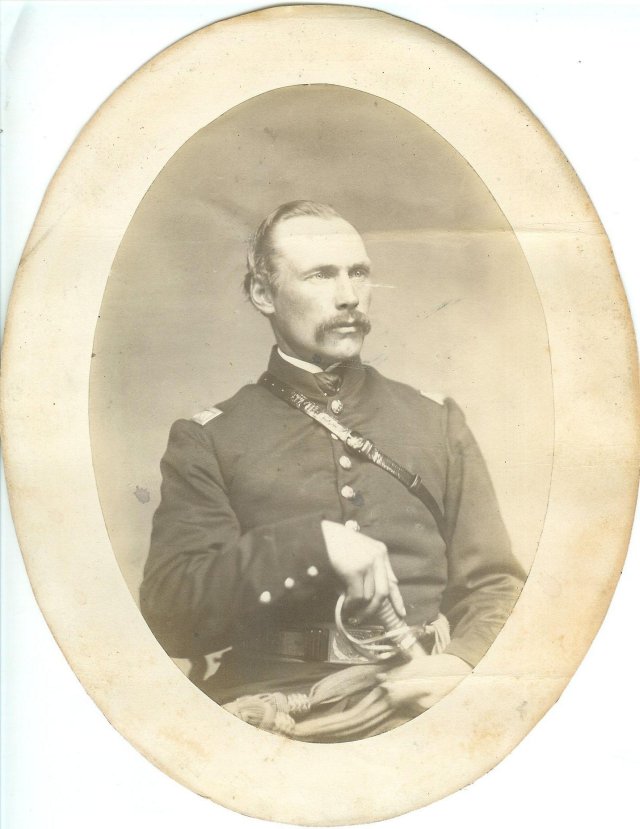 Addison Webster Preston was born in the town of Burke, Vt., but removed in early childhood with his parents to Danville, which was thenceforward his home. He fitted for college, entered Brown University at the age of 21, and took high rank as a scholar; but after a years and a half, was obliged to leave college by the condition of his health, and as his physician advised a sea voyage, he sailed to Australia, where after a stay full of adventure, he sailed for California, where he spent several years. He had returned to Danville and was engaged in business there when the war broke out. He enlisted in September, 1861, in the First Vermont Cavalry, was chosen captain of company D, which he had been active in recruiting, and from that day gave all his energy of mined and body to the duties of a soldier. He had had the command of the regiment for much of the time during the twenty months preceding his death. He was one of the best disciplinarians that ever commanded the regiment. He took good care of his men and was popular with them. As a man he was frank, hearty, genial, quick of thought and action. As a fighter he was brave to a fault, impetuous, eager to strike, ready to go himself wherever he sent his men, and unwilling to leave any place of danger as long as there was anything to be done. He was twice wounded, at Hagerstown in the Gettysburg campaign and at Culpeper Court House two months later. His commission as colonel was delayed in transit by the exigencies of the campaign and reached the headquarters of the regiment the day after his death. Had he lived a few days longer he would have been promoted to a brigadier generalship; for he stood very high with his superiors, and they were only waiting for his appointment as colonel, to give him high rank and more responsible duties. General Custer voiced the opinion of many, when, as he turned away from his corpse, he said: "There lies the best fighting colonel in the Cavalry Corps."

Colonel Preston's remains were taken to White House and thence to Vermont, where his funeral took place at Danville, with extraordinary demonstrations of honor and respect on the part of his townsmen and of the citizens of the surrounding towns and of a large portion of Caledonia county. He left a widow, an estimable lady, whose maiden name was Juliette Hall, of Lowell, Mass., and two children.

In 1891, at a G.A.R. meeting in St. Johnsbury, Preston's widow presented the members of Company D, Preston's original company, with copies of the above photograph as a momento. The event was documented by an article in the Caledonian Record. 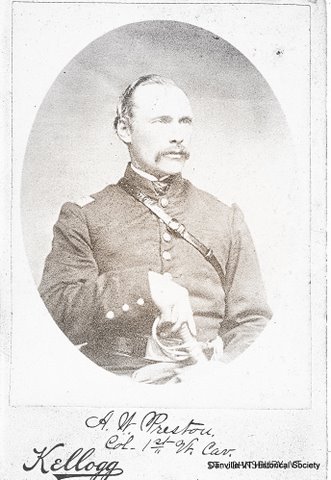 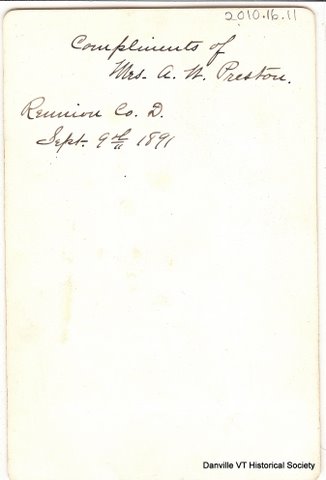 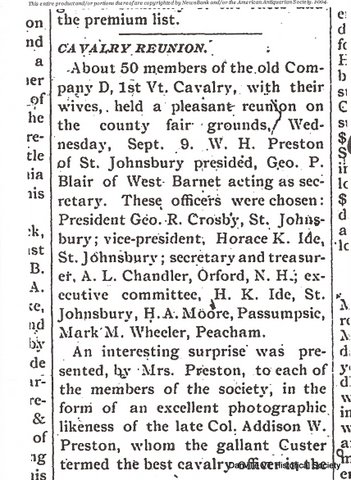 The Danville Historical Society has also graciously given us a photograph of one of Preston's children, Willametta. 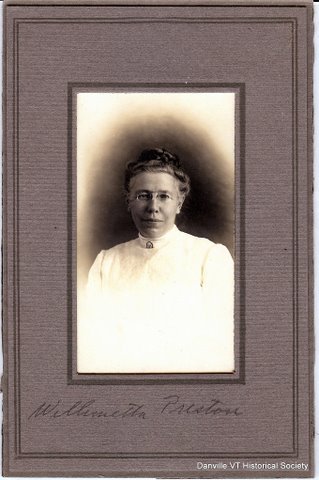 On Thursday of last week our citizens were notified that the remains of Col.. Preston would reach this place on the afternoon train. A large number assembled at the depot, including the officers of the court now in session here, and the members of the bar. On the arrival of the body a procession was formed and, with the stars and stripes borne aloft – that flag which he whom we honored so dearly loved – it moved forward to the slow measured beat of the drum, while the tolling bells sounded forth a requiem for the departed spirit. The escort accompanied the funeral train some distance on its way to Danville, where the last sad ceremonies of consigning "dust to dust" took place Sunday afternoon.

At an early hour Sunday people began to arrive at Danville from the adjoining towns and by noon a large concourse had assembled to do homage to the earthly remains of a patriot. After services at the house, a procession was formed under the direction of Capt. Fisher, of the 4th Reg., and proceeded to the church, which was filled to its utmost capacity, hundreds not being able to gain admittance. After an impressive prayer and a voluntary by the choir, Rev. Mr. Eastman commenced the services by reading extracts received from the brother officers of the deceased, all speaking in terms of him as an officer and companion. Rev. E. c. Cummings next spoke, and from intimate personal acquaintance with Col. Preston, was enticed to present in a forcible manner the manly virtues, heroic bravery and gentlemanly bearing of the fallen patriot. The coffin was shrouded with the old flag which he had fought so bravely to sustain, upon which lay a sabre and pistole captured in a hand to hand fight with a rebel officer, and closely by their side lay garlands and wreaths of flowers. At the conclusion of the services in the church, the procession was again formed. Close behind the hearse followed a horse bearing the saddle and bridle belonging to the deceased, and all the equipment he had so lately worn. A long train of sympathizing friends followed the remains to their last resting place.